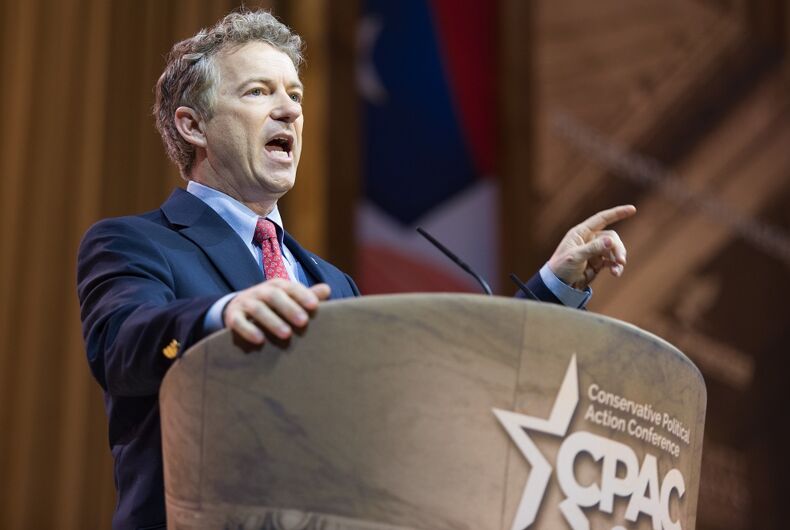 Three Senate Republicans – including Sen. Mitt Romney (R-UT) – spoke out against transgender equality in high school sports yesterday at the Senate Health, Education, Labor, and Pensions Committee confirmation hearing for President Joe Biden’s appointee for Secretary of Education, Miguel Cardona, calling transgender girls “boys” and saying that cisgender girls can’t compete against them, even though most states have permitted transgender girls to compete in sports as their gender for years.

But Paul went on a long rant on the issue, treating it like one of the most pressing education issues America faces in 2021.

He brought up a letter sent by the Trump administration to the state of Connecticut that said, according to the self-styled libertarian senator, “Boys can’t compete with girls in sports.” He asked Cardona if he would continue that policy.

“I understand that there are a lot of concerns about that,” Cardona responded. “If confirmed, it’s my responsibility and my privilege to make sure that we’re following the civil rights of all students, and that includes activities that they may engage in high school including athletics.”

“What do you think in general about boys running in girls’ track meets like they’ve been doing in Connecticut?” Paul asked Cardona. A group of cisgender girls is suing Connecticut’s athletic governing body with help from the anti-LGBTQ hate group Alliance Defending Freedom in order to get it to ban transgender girls from competing. The Trump administration was supportive of this lawsuit.

Cardona reiterated his support for “the rights of all students, including students who are transgender.”

Visibly frustrated with Cardona, Paul said, “Doesn’t it bother you that the top 20 percent of boys running in track meets beat all of the girls in the state and that it, you know, would, you know, completely destroy girls’ athletics? The girls are being pushed out. They don’t make the finals in the state meet, they don’t get college scholarships, that it’s really detrimental to girls’ sports.”

“Do you worry about having boys running in girls’ track meets?” Paul asked.

He was referring to a common anti-transgender scare tactic, which is that rights and protections for transgender people will be abused by cisgender people who will lie and say that they’re transgender. In the many states that currently allow transgender girls to compete in school sports as their gender, there has not yet been a state where cisgender boys lied and said they were trans girls in order to win at a sport and completely blocked girls out of the state championship.

Cardona said he “appreciate[s] the concerns and frustrations” that Rand discussed, but Rand again pushed him on “boys running in the girls’ track meets, swimming meets, you name it.” He went on to say that transgender student athletes are “bizarre, not very fair” and talked about girls in his family who competed in sports.

“This kind of thing is going to lead to just the vast majority of Americans wondering who are these people that think it’s OK? From what planet are you from to think it’s OK for boys to compete with girls in a track meet and that that somehow would be fair?”

“Are we all gonna be OK with hulking six-foot-four guys, you know, wrestling against girls doing- You know, it just makes no sense whatsoever and so I think the fact that you seem to be afraid to answer the question,” Rand said, “really is a statement to a problem we have and a disconnect between what middle America and what most Americans actually believe.”

Sen. Mitt Romney (R-UT) said that he wanted “to associate myself with a number of things stated by Sen. Paul.”

Sen. Mitt Romney: “I’ve got pictures of my 8 granddaughters, amongst some grandsons, behind me. They shouldn’t be competing with people who are physiologically in an entirely different category.” pic.twitter.com/h5HbKHQyCn

Sen. Roger Marshall (R-KS) then brought up the issue again.

“I just don’t think it’s American that a genotypical male, a person with a Y chromosome, is competing against girls,” he said at the hearing.

“Discrimination based on gender is illegal,” Cardona said in response.

“I feel it’s nonnegotiable to make sure that our learning environments are places that are free of discrimination and harassment for all learners, including our LGBTQ students,” said Sen. Tammy Baldwin (D-WI).

“Transgender girls are girls — plain and simple,” the group said in a statement. “There are thousands of issues facing students across the country during the pandemic, from reopening schools and restarting in-person learning to addressing and protecting the mental health of our children.”

“Yet, despite all of those pressing crises, Sen. Rand Paul chose to exclusively use all of his allotted time to attack transgender children: misgendering, spewing misinformation, and insinuating malintent among children who are just seeking to participate in sports. It is disgraceful that Sen. Paul is choosing to fearmonger in order to score political points at the expense of some of our community’s most vulnerable. Secretary-designate Cardona spoke to the truth of the matter: our laws should and do protect LGBTQ people from discrimination.”

For the past several years, Republicans who never cared about girls’ sports have tried to use transgender girls competing in athletics as a wedge issue. In a 2019 House hearing for the Equality Act – which would add sexual orientation and gender identity to existing federal civil rights legislation, banning discrimination against LGBTQ people in public accommodations, housing, credit, and other areas – Republicans spent most of their time talking about transgender girls in sports as if that was even a major component of the Equality Act. Every Republican ended up voting against the bill.

A PAC that support Donald Trump in the 2020 election also ran ads that focused on transgender girls in sports, even though that was not a major issue in the campaign. One GOP operative said, “The Trump campaign will see it’s a powerful issue that the Republican Party can use to its success.”