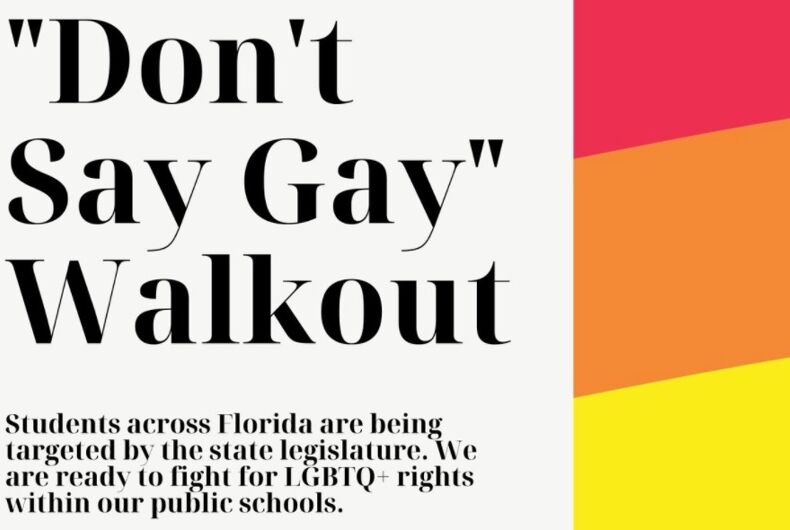 Florida students are planning to walk out of class to protest GOP attacks on their fellow studentsPhoto: Twitter/screenshot

Florida’s H.B. 1557, which would ban teachers from discussing LGBTQ people in class, passed the state House of Representatives yesterday.

And students across the state have quickly taken up the cause, organizing a walkout for next week to protest the attack on their fellow students.

After a gay legislator broke down in tears speaking against the bill, Republicans passed the measure without Democrat support. The House also passed the “Stop WOKE Act” that bans discussions on race and gender identity.

“Students are angry, frustrated and ready to fight this sickening piece of legislation,” student Jack Petocz tweeted along with a graphic announcing the protest.

“Students across Florida are being targeted by the state legislature,” the graphic says. “We are ready to fight for LGBTQ+ rights within our public schools.”

“The Don’t Say Gay bill seeks to ban discussions surrounding sexual orientation and gender identity. We won’t stand for the diminishing of our perspectives within educational institutions! Queer students deserve to openly be their authentic selves.”

The graphic asks student leaders in schools across the state to organize their own walkouts to show support.

The protest is planned for March 3 at noon. Participants are being asked to tweet photos of the walkout with the hashtag #DSGWalkout

Today, the Florida House passed the "Don't Say Gay" bill. Students are angry, frustrated and ready to fight this sickening piece of legislation. I'm organizing a statewide school walkout on March 3rd at 12:00 PM in opposition. I encourage student leaders to join me. #DSGWalkout pic.twitter.com/itcCmLVj6o