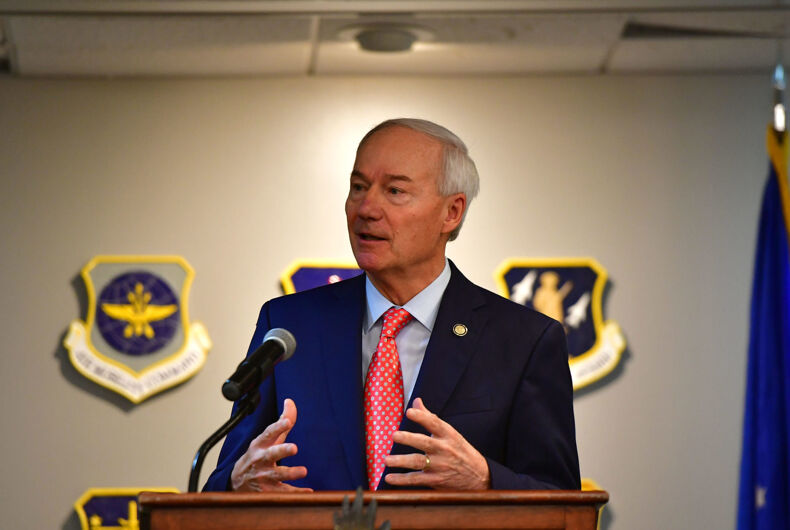 In what are considered some of the most polarizing times in modern American history, one political trend has continued to grow to alarming levels: enacting laws that take away rights or protection of rights from queer and trans people.

With the enactment of two anti-LGBTQ laws this weekend, Montana has officially broken the record for the most anti-LGBTQ legislation enacted in a calendar year in the United States. All it took was four months and nine days to get over the previously recorded threshold made in 2015.

Montana’s Gov. Greg Gianforte (R) signed House Bill 112, which bans transgender youth from participating in sporting events under their gender identity. His signature on May 7 made it the 17th piece of anti-LGBTQ legislation enacted in the United States, surpassing the 16 that were passed in 2015, according to an analysis by the Human Rights Campaign.

“The rights of LGBTQ people — and especially transgender people — across the country are being systematically threatened and undermined by national anti-LGBTQ groups coordinating with anti-equality lawmakers to wage an unprecedented war on the LGBTQ community,” Alphonso David, the President of the Human Rights Campaign, said in a statement.

Anti-LGBTQ laws became a popular GOP calling card in 2015, a reactive response to years of LGBTQ civil rights progressing in both the federal and judicial circles. That same year, the Supreme Court finally made marriage equality the law of the land.

Still, “some of these bills are similar to or even worse than anti-LGBTQ legislation that has been rejected in previous years,” Alphonso pointed out.

Gov. Gianforte also signed Senate Bill 99, which requires Montana schools to inform parents if they want to mention anything related to “human sexuality” in class, and will only allow the instruction for students who “opt-in” to it and other lessons related to sex education.

This is the second law targeting LGBTQ people through education, after Tennessee passed a similar law.

Other states have also tried to limit the rights of LGBTQ people from protection from discrimination. “Religious freedom” and “religious exemptions” laws have also been enacted across the country this year after they fell out of favor prior to 2017. Three states — Arkansas, Montana, and South Dakota — passed four laws of this nature this year.

Still, bans on trans youth from athletic activities have become the most popular proposals for those who want to signal they oppose LGBTQ rights, or specifically trans people. The spate of legislation was set off in the state of Idaho last year.

Idaho’s H.B. 500 is currently blocked from being enacted by a federal court’s injunction. But its success gave other Republicans a political point to use to show their stark opposition to Democrats during the lead-up to the 2020 elections.

After Idaho, several anti-LGBTQ lawmakers like former Rep. Tulsi Gabbard (D-HI) and Sen. Kelly Loeffler (R-GA) tried to propose bans on trans people in sports or made it an issue on the campaign trail.

That foreshadowed the bans on trans youth in sports that would become law in 2021. Now Montana, West Virginia, Alabama, Tennessee, Mississippi, South Dakota, and Arkansas join Idaho as states that have enacted some form of bans, and several bans have been considered (or are being considered) in states like Florida, Kansas, Pennsylvania, Texas, and more.

Anti-LGBTQ groups like the Heritage Foundation and the Eagle Forum, and SPLC-recognized hate groups such as the Alliance Defending Freedom, have championed, materially supported, and even written some of these bills. Over 250 anti-LGBTQ bills have been introduced or proposed, and the Campaign estimates that half of them specifically target trans people. Eleven of those bills are currently in position to become law unless they are vetoed by a governor.

Republicans are trying to drive trans youth healthcare or participation in sports as a “wedge issue” to unify the pro-Trump and anti-Trump right, or to separate them from Democrats. It mostly has not worked, causing more division in the party.

Sen. Tommy Tuberville (R-AL) sponsored an amendment to the last COVID-19 relief bill that would strip any federal funding from schools or school-based programs that allow trans girls to participate in school sports. It nearly passed, but failed, and the majority of the bill still passed.

Then there are Democrats who support anti-trans measures mainly to further their own agenda.

In Texas, Rep. Harold Dutton (D) did not vote on a proposed bill to ban trans youth in school sports when it came to the Public Education Committee, which he chairs. But when fellow Democrats didn’t support one of his proposals, he revived the proposal and voted to pass the ban, effectively reviving its chances of passing. He explicitly told his peers he did so as “retaliation.”

But in the end, despite the divides, the anti-trans proposals are generally being used as political tools.

“Bills that have become law so far this year range from making it a felony to provide transgender youth with life-saving health care to banning transgender girls from participating in sports to erasing LGBTQ people from school curriculum to granting broad licenses to discriminate against LGBTQ people,” Alphonso said. “This crisis cannot be ignored and necessitates concrete action from all those with the ability to speak out.”