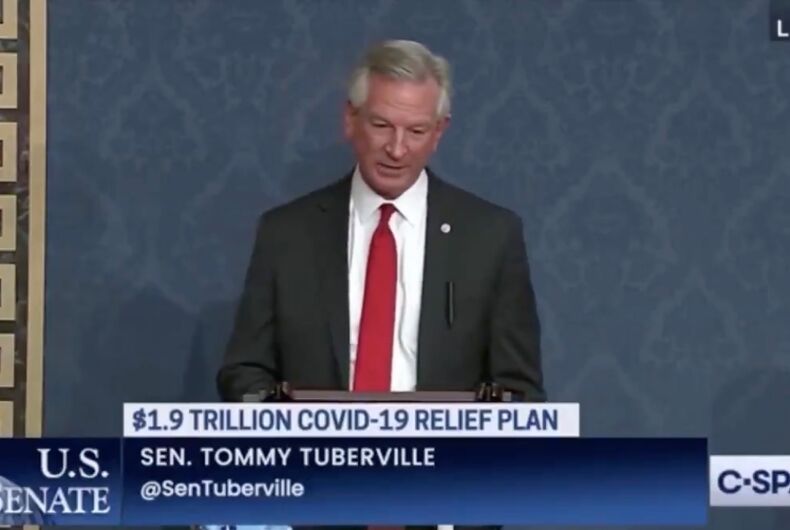 Sen. Tommy Tuberville (R-AL), a former college football coach who became the junior U.S. Senator for Alabama with his election this fall, still has sports on his mind.

Only instead of leaving the last minute play calls on the field, he — along with Sen. Lindsey Graham (R-SC) and Sen. Roger Marshall (R-KS) attempted an audible at the last minute of the $1.9 trillion COVID-19 relief bill currently under consideration in the evenly split Senate. It didn’t work, but it left some of his colleagues stunned.

He introduced Senate Amendment 1386 on the floor by saying itwould “ensure that education funding in the bill is properly directed to schools who are focused on COVID response and recovery rather than pushing a liberal agenda,” he claimed.

The “liberal agenda” he had in mind was the inclusion of trans girls and women in women’s sports. His amendment was “to prohibit funds made… to States, local educational agencies, and institutions of higher education that permit any student whose biological sex is male to participate in an athletic program or activity designated for women or girls.”

In short, Tuberville’s amendment, co-sponsored by Graham and Marshall, would strip any federal funding from schools or school-based programs that include trans girl participants in female sports. Schools or programs that allow trans boys and men to participate in male sports alone would not have been impacted directly by the amendment.

Tuberville’s amendment did not describe exactly how schools should determine what someone’s sex assigned at birth is, leaving it open to interpretation. All the bill would do is allow for withholding of their federal-allocated funding if an institution is found in violation of the rule.

In an emotional rebuff, Sen. Patty Murphy (D-WA) took the floor and said, “all students, including transgender students, benefit from participating in sports, to challenge themselves, to improve fitness, to be part of a team. Allowing transgender students to participate in athletic activities consistent with their gender identity in no way disadvantages their fellow students.

“For the love of God,” she implored Tuberville and others, “can’t we just have a little bit of heart and compassion in this world for someone who doesn’t look or live exactly like you?”

"Under this amendment, educational institutions would prohibit from receiving funding if by biological males are allowed to compete in women's athletics." pic.twitter.com/p4wawhHI7Z

Sen. Patty Murray (D-WA) NOT having this Tuberville amendment: "…simply an attempt to discriminate against transgender students."

"For the love of God can't we just have a little bit of heart and compassion in this world for someone who doesn't look or live exactly like you." pic.twitter.com/SVIFHdGpbk

49-50, Senate rejected the Motion to Waive All Applicable Budgetary Discipline Re: Tuberville #SAmdt1386 to #HR1319; To prohibit funds made available under title II to States, local educational agencies, and institutions of higher education that pe (#97) https://t.co/SOmYJ3Dv4t

Sen. Dan Sullivan (R-AK) did not vote as he had returned home for a family member’s funeral. That left the GOP side of the aisle one vote short of meeting the minimal 50 votes needed to push the issue.

Still, if it came down to a 50-50 vote, Vice President Kamala Harris (D) would become the deciding vote as President of the Senate, and she likely would not have supported it.

In the end, the relief bill – known as the American Rescue Plan Act of 2021 – was finally passed in a 50-49 vote. Manchin and Murkowski voted with their party for the overall bill’s approval. Manchin supported the bill after compromising by his peers and other prominent Democrats over the unemployment plan.

This came just after a slew of amendments were considered in the last few days, including one that would have increased the minimum wage in the United States to $15. During that amendment’s defeat, out Sen. Kyrsten Sinema (D-AZ) garnered attention because video of her making her vote clear by intensely threw her thumb down went viral online. It caused comparisons between her and the famed aristocrat, once-queen of France Marie Antoinette.

Stimulus checks of up to $1,400 for certain American adults and children, and weekly unemployment aid of $300 from now until the beginning of September, were stipulated in the bill.

Tuberville just became a Senator in January, and other than voting against the country’s first openly gay Cabinet secretary, didn’t openly directly express any anti-LGBTQ remarks. He ran in 2020 against then-Sen. Doug Jones (D-AL).

Jones had won the seat in a special election after former Sen. Jeff Sessions (R-AL) vacated the seat to become Attorney General in 2017, before President Donald Trump dismissed him.

Trump openly supported and endorsed Tuberville over Sessions when the latter tried to run for his old seat in 2020, paving the way for the newcomer Tuberville’s GOP primary win and eventual general election win.

Tuberville’s campaign website didn’t explicitly mention LGBTQ people specifically, but he did say that he was a “Christian conservative” and that he believes “liberals in Washington are out-of-control.” Late last year, Tuberville complained that drag queens performed in his town’s Christmas parade. While he didn’t say exactly what his issue was with the drag queens, comments on his Facebook post called them “sick” and “disgusting.”

After more than 21 hours on the Senate floor, Sen. Tuberville further delayed relief for American families with an amendment attacking transgender kids. But the @SenateDems majority made it clear: trans kids should not be used as political pawns, and #TransRightsAreHumanRights

We call on the Senate to pass the #EqualityAct. pic.twitter.com/y0nyphtn8S

Senator Tuberville is attempting to use the COVID relief bill to ban trans kids from playing soccer with their classmates.

In the middle of the night Senator “$15 min wage doesn’t belong in this bill” voted to add “let’s punish trans kids” to the bill. https://t.co/tkhrLWBje1

So Manchin just voted against trans kids. We are okay because Murkowski voted NO on hideous anti-trans amendment.

Grateful to the Senators who voted down this poison pill amendment and put American families and small businesses ahead of misinformation and fear-mongering. #LetKidsPlay https://t.co/gH4Rcg5vru

It is difficult to put into words the pain that trans people are feeling. This weekend please join me in directing attention to Alabama where the House will soon vote to criminalize kids and South Dakota where on Monday the Senate will again vote to ban trans kids from sports.

Editor’s Note: This article originally referred to Sen. Roger Marshall of Kansas as “Roger Mitchell.” We regret the error.