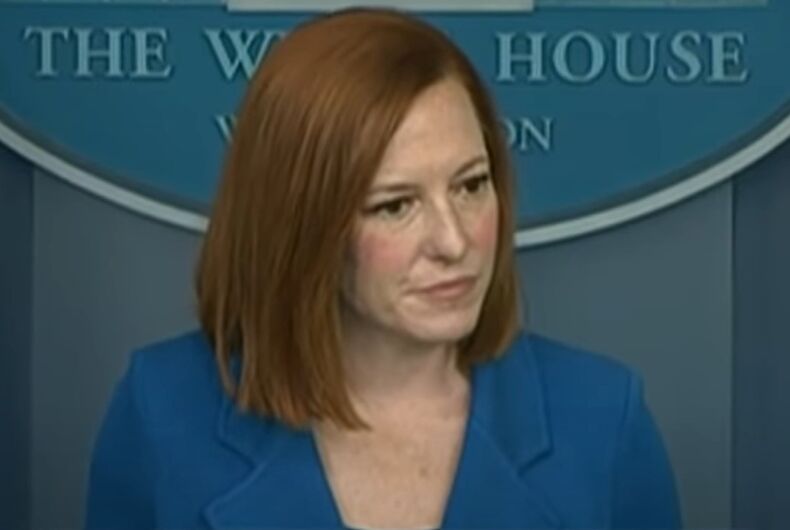 White House Press Secretary Jen Psaki shut down a Fox News journalist who accused the Biden administration of stifling job growth by being too generous with unemployment benefits.

“Employment only rose by about 266,000 jobs in April,” Fox’s Peter Doocy asked, saying that there were more job openings left unfilled last month, according to Department of Labor numbers. “How does the White House know that people are just choosing not to apply for jobs because the extra unemployment benefits are so good?”

Psaki didn’t waste any time cutting down the implication that unemployment benefits during the pandemic have made people too lazy to work.

“We don’t see much evidence that the extra unemployment insurance is a major driver in people not rejoining the workforce,” she said. “We actually see the data and our analysis shows that the lack of vaccinations – the lower rate, which is why I refer to the data and the week that it was taken – it has an impact. Child care has an impact. Schools reopening has an impact.”

“But there’s also the need to pay a livable working wage.”

Doocy cited “economists in a Bloomberg story” to assert that “anybody who is making less than $32,000 a year is better off financially just taking the unemployment benefits. So is the White House creating an incentive just to stay home?”

“Well, again, the majority of economists internally and externally at the White House don’t feel that unemployment insurance – something that was done at a time to help unemployed people get through a difficult economic downturn during a pandemic – is a major driver in our unemployment data,” Psaki insisted. “There are other factors, bigger factors that were contributing, have been contributing to the numbers we saw on Friday. That’s what we’re working to address.”

Bloomberg actually did a report on the exact numbers Doocy brought up. Employment increased in April but not by as much as experts predicted, and Bloomberg listed the reasons that Psaki mentioned, like child care – since many schools are still closed – and virus fears.

“April payrolls fell dramatically short of expectations, as a clumsy reopening of the economy appears rife with frictions, such as skills-mismatches, parents unable to return to the workforce amid a significant share of schools not yet open, and far from complete vaccination efforts,” said Bloomberg economists Carl Riccadonna, Yelena Shulyatyeva, Andrew Husby, and Eliza Winger in their published analysis.