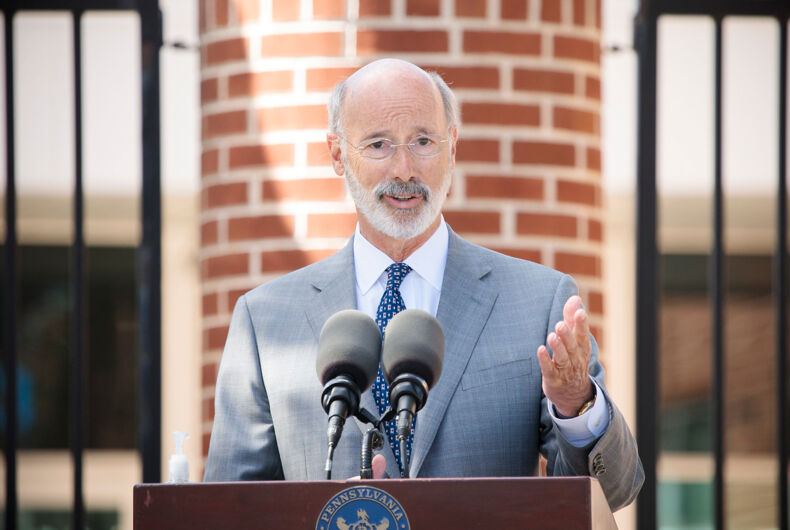 Pennsylvania Governor Tom Wolf speaking with the press in York, Pennsylvania on October 8, 2020.Photo: PA Office of the Gov.

Pennsylvania Gov. Tom Wolf (D) made it clear to the Republican-majority legislature: pass a ban on trans girls and women in sports, and it will be vetoed.

Although the GOP has a majority in both the state house and senate, it does not have a two-thirds majority in either chamber, the required amount to override a veto in the Keystone State.

Related: This state legislature barred Pride flags from the Capitol. The Lt. Governor will fly it anyway.

Gov. Wolf actually released a statement when the bill was first proposed that he would veto it should it come to pass, but that message wasn’t sent clearly enough to the state legislators still moving it forward.

So he took to Twitter to spell it out for them: “I’ll veto this discriminatory bill if it gets to my desk,” he wrote.

I’ll veto this discriminatory bill if it gets to my desk. https://t.co/nnc8vOuEdH

Thank you, Gov. Wolf! Our legislators must do better & reject such hatred.

State Rep. Barbara Gleim (R) is the primary sponsor of House Bill 972, the so-called “Pennsylvania Save Women’s Sports Act.” It calls for “sport activities in public institutions… to be expressly designated male, female or coed; and creating causes of action for harms suffered” for any student who may end up on a team with, or isn’t let on a sports team with, someone who is trans. It would apply to sports at all primary school levels as well as in college school sports.

The bill is currently before the state House Education committee.

When it was first announced, Wolf’s spokesperson Lyndsay Kensinger told Billy Penn, “any legislation designed to deny opportunities to certain children is both disturbing and dangerous. Trans youth should know that they belong, that they are valued and that their participation in school activities is welcomed.”

In 2015, as Governor-elect, Wolf nominated Dr. Rachel Levine, a trans woman, to be the state’s top health official. Dr. Levine went on to become the Assistant Secretary of Health in the new Biden administration, making her the highest ranking out transgender official in United States history.

Republican lawmakers in Pennsylvania made a habit out of making transphobic remarks and “jokes” disparaging Dr. Levine.

One state representative faced a reprimand from other legislators for sharing a derogatory meme about Dr. Levine online. He later resigned. Another Republican official in the state resigned after insulting Levine, and another refused to apologize for deadnaming her. A county fair booth garnered funds by allowing someone to dunk a man impersonating Dr. Levine in water, and a restaurant named menu items after her in a derogatory fashion.

“Frankly, I do not have time for intolerance,” she told LGBTQ Nation in a 2020 interview. “My heart is full with a burning desire to help people. And my time is full with working toward protecting the public health.”