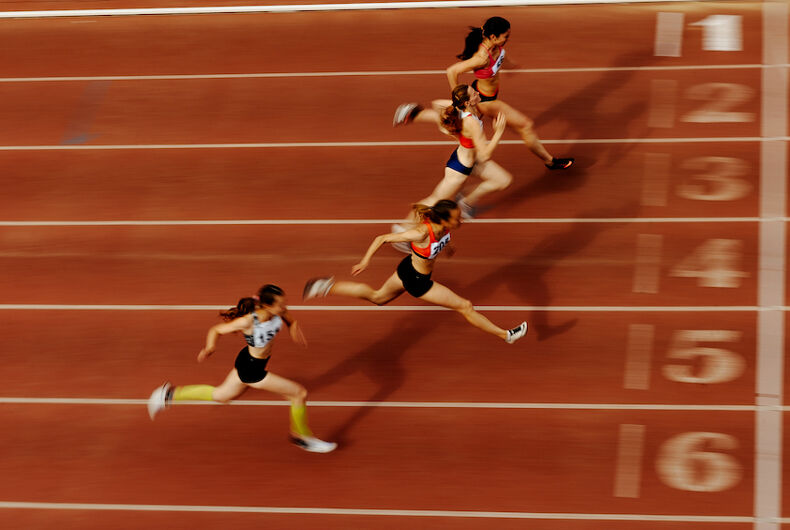 Runners during the Ural ChampionshipsPhoto: Shutterstock

Anti-transgender legislation is being proposed by state GOP lawmakers all over the country this year, with at least 20 states considering legislation that would roll back transgender rights, most targeting transgender youth.

And now advocates are raising the alarm about the national organizations and hate groups behind these bills.

“These bills are intended to look constituent-led, but we know it’s driven from these centralized groups,” Chase Strangio of the ACLU told NBC News. He appeared on the LGBTQ Nation podcast this week to discuss the anti-transgender legislation.

Most of them target transgender youth and would ban transgender girls from playing sports, criminalize doctors who provide gender-affirming care like puberty blockers to trans youth, or require schools to out trans kids to their parents if they ask to go by certain pronouns.

HRC named several of the right-wing organizations behind the legislation: the Heritage Foundation and the Eagle Forum, along with the SPLC-designated hate group Alliance Defending Freedom (ADF).

ADF is believed to be behind last year’s Idaho law that banned transgender girls from playing sports – the first of its kind in the U.S. and a federal court has already issued an injunction against it. HRC says that the same group is behind this year’s similar bill in Montana.

The hate group has been active in attacking LGBTQ rights. In 2016, they were allegedly behind laws in at least five states to ban transgender people from using the correct bathroom in public.

They have also been advocating for anti-LGBTQ hatred in courts, defending the Masterpiece Cakeshop in Colorado when it refused to sell a cake to a gay couple and representing three cisgender girls in Connecticut who are suing their state because they had to compete against two Black, transgender girls at track meets.

“Alliance Defending Freedom has on several occasions said that, should a state be sued for one of these pieces of anti-trans legislation, that they would be happy to take care of the litigation,” HRC’s Cathryn Oakley told The American Independent.

The work of these national organizations could explain why Republicans in so many states are trying to get these bills passed this year, even while openly admitting that they have no idea whether their legislation would address any complaints in their states.

For example, Mississippi Sen. Angela Hill (R) sponsored a bill that would ban transgender girls from competing in sports. During the debate on the bill, Republicans couldn’t even name a transgender student-athlete in the state and none of them even asked if there were any. Hill herself was only willing to say that “numerous coaches across the state” told her that “they are beginning to have some concerns of having to deal with this.”

“We know that legislators are getting this kind of scary misinformation from some of these national sources and then taking it back to their home state,” said Oakley.

These organizations fought against basic LGBTQ rights in the past, like opposing marriage equality. Now, with Congress set to vote on the Equality Act as early as next week, they’re revving up attacks on transgender youth, who they may perceive to be the easiest targets among LGBTQ people.

“When you look at these organizations that are really founded on attacking equality, across racial equality, religious quality, gender equality, and LGBTQ equality, their fight against marriage equality didn’t work…. It stopped being controversial,” Oakley said.

What does the impeachment acquittal & anti-trans legislation have in common?