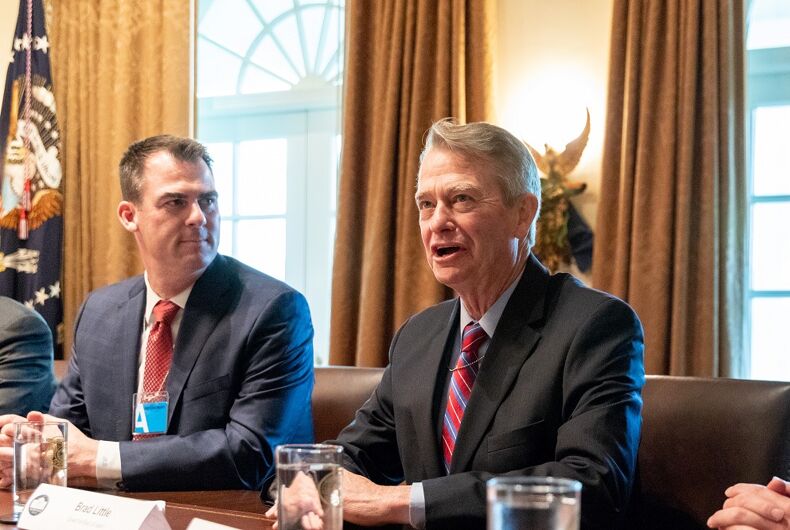 Last month, the governor of Idaho signed two anti-transgender bills into law. Now the state is getting sued for both of the bills.

One bill that Gov. Brad Little (R) signed bans transgender people from correcting the gender marker on their birth certificates, and the other bans transgender girls from competing in school sports.

Lambda Legal has filed a federal lawsuit challenging the birth certificate law, which was passed after a federal magistrate overturned the state’s previous ban on transgender people correcting the gender marker on their birth certificates in 2018.

Lambda Legal fought that previous legal battle, arguing that banning transgender people from correcting their birth certificates is illegally discriminatory because the state allows other people to update birth certificates for other reasons, and having documents that don’t match a person’s gender identity can lead to discrimination and violence.

Peter Renn of Lambda Legal called the new law “a naked flouting of the law.”

“It is shocking that lawmakers would be so brazenly lawless as to defy a federal court ruling,” he continued. “The rule of law collapses if we refuse to abide by the outcome of who wins and loses in our system of justice.”

Little said that the new law is “common sense” because “one’s birth certificate reflects what one’s sex is at birth.”

According to the AP, Idaho lawmakers have a history of passing laws that they know will be challenged in federal court.

Also this past week, the ACLU and Legal Voice filed a lawsuit challenging the school sports law, saying that it violates Title IX, which bans discrimination based on sex in education.

“I would like to compete as a female,” said Boise State University athlete Lindsay Hecox, one of the plaintiffs in the case who is also transgender. “We shouldn’t have our privacy invaded. If people started questioning me, I wouldn’t want to be subjected to multiple tests.”

The groups are also arguing that the law invades the privacy of female athletes because it allows people to challenge a student-athlete’s gender and force them to undergo genital, genetic, and hormonal examinations in order to continue competing. One of the other plaintiffs in the case is a cisgender girl who competes in high school sports.

The law “illegally targets women and girls who are transgender and intersex and subjects all female athletes to the possibility of invasive genital and genetic screenings,” the ACLU’s Gabriel Arkles said in a statement.

The AP reports that a third law, which would have criminalized treating transgender youth for gender dysphoria, has died in committee in the state house.