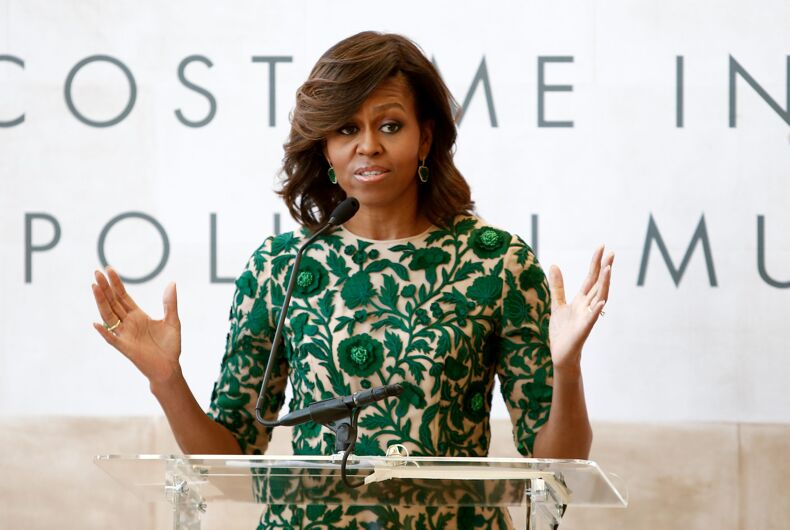 Most states with primary elections scheduled for late March or April either delayed them or moved to only voting-by-mail. Republicans, because the change to make it easier to cast a ballot would benefit Democrats, have done everything in their power to prevent it.

Democrats have fought back in the courts and media, but without much success. Enter Michelle Obama. Things just got real.

As Americans continue to hunker down in lockdowns nationwide, Obama is highlighting the dangers potentially posed by voting in person during a pandemic. LGBTQ and African Americans are reliable Democratic constituencies and both groups of people have been shown to have a higher risk of COVID-19.

Exit polling from NBC News showed that LGBTQ people made up between 6% and 13% of voters in Democratic primaries in 12 of the 14 states that held primaries on Super Tuesday.

When We All Vote, a nonpartisan voting initiative led by the former first lady, wants to expand Americans’ ability to cast a vote in the election. The group says this requires allowing more early in-person voting, online voter registration, and expanded access to voting by mail.

“No American should have to choose between making their voice heard and staying safe,” Obama posted on Twitter to announce the campaign, saying the changes aren’t just “critical steps for this moment,” they’re also “long overdue.”

No American should have to choose between making their voice heard and staying safe. Expanding access to #VoteByMail, online voter registration and early voting are critical steps for this moment—they’re also long overdue. https://t.co/s0KZ2Pj6zw

Wisconsin Republicans fought all the way to both the state and U.S. supreme courts to keep the primary on as scheduled last week and voters were packed into limited polling places, risking their lives to participate in democracy.

Gov. Tony Evers (D) postponed the election, both because public health officials wanted to limit the spread of coronavirus and because election officials have been having trouble in the past few weeks setting up polling places.

The Republican-controlled state legislature, though, took him to court. The state supreme court ruled in a 4-2 decision that he did not have the authority to call off the election. A U.S. district court refused to postpone Wisconsin’s election, but ruled that the governor could extend absentee voting by six days to take the pressure off the polls.

Republicans appealed to the U.S. Supreme Court, which overturned the district court’s decision. All five of the Republican-appointed justices ruled that the state cannot extend absentee voting.

“The Court’s suggestion that the current situation is not ‘substantially different’ from ‘an ordinary election’ boggles the mind,” Justice Ruth Bader Ginsburg wrote in her dissenting opinion.

Idaho passed 2 anti-transgender laws during the pandemic. It’s getting sued for both of them.