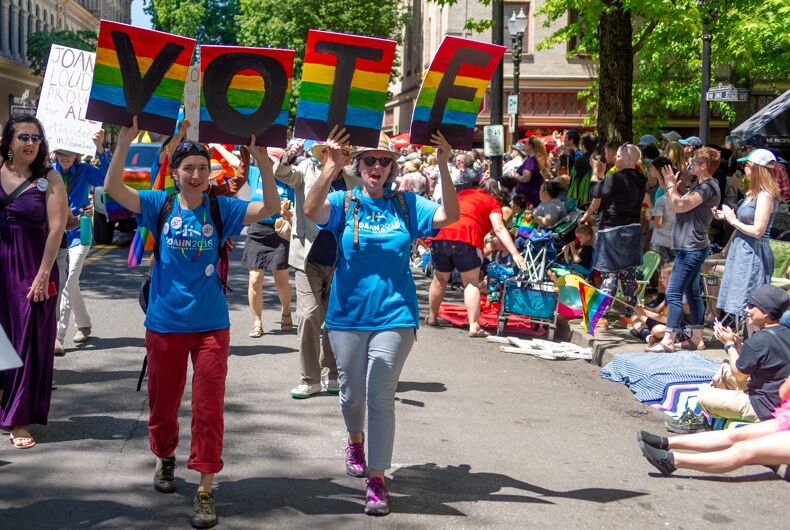 Two women urge LGBTQ people to vote in the next election during the 2018 pride parade in Portland, Oregon. Photo: Shutterstock

Exit polling from NBC News shows that LGBTQ people have made up a huge percentage of voters on Super Tuesday. Between 6% – 13% of voters self-identified as lesbian, gay, bisexual, and/or transgender in 12 of the 14 states voting.

A third of LGBTQ people voting today were under 30. In a striking example of the devastating impact of HIV/AIDS on the community, 65 percent of LGBTQ voters were under the age of 45.

Related: Is voter suppression going to prevent trans citizens from exercising their rights?

In both Maine and Massachusetts, 13 percent of Super Tuesday voters identified as part of the community. Only 4.9% of Maine residents identify as LGBTQ; 5.4% of Massachusetts residents do.

“Tonight, LGBTQ people showed up in record numbers and cemented our status as a crucial constituency to court,” Alphonso David, President of the Human Rights Campaign, said in an emailed statement. “LGBTQ people and our rights have been on the ballot for decades, compelling us to register to vote and participate in politics rather than let others decide our rights for us.”

“2020 marks the most pro-equality field of Democratic Presidential candidates in U.S. history. Our power has continued to grow and candidates are seeing us increasingly for the critical voting bloc we are and have pursued us vigorously, releasing policy after policy providing more details about their LGBTQ platforms than any other Democratic primary field in history.”

Virginia bans conversion therapy for minors. It’s the first southern state to do it.