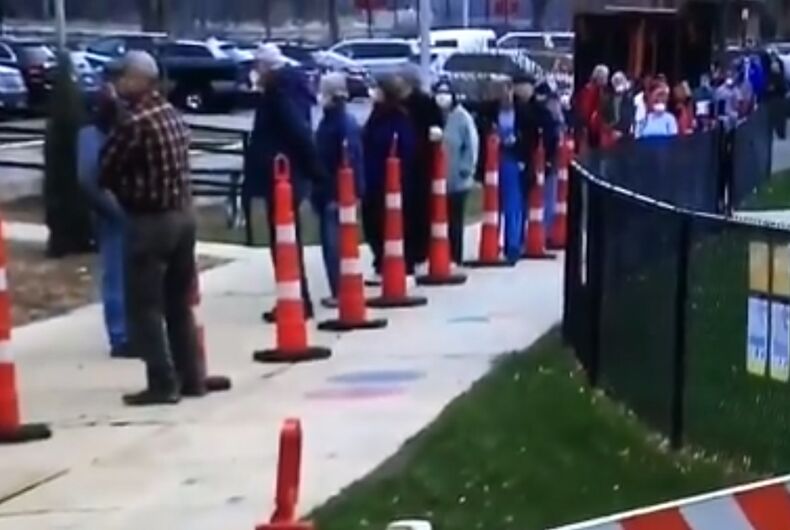 Voters - some with masks, others without - show up to vote in Wisconsin's primary. Photo: Screenshot/WISN 12 News

Wisconsin is holding its primary election today in the middle of the coronavirus pandemic as other states with primaries in late March and April have either delayed them or have moved to only voting-by-mail.

Republicans fought all the way to both the state and U.S. supreme courts to keep the primary on as scheduled and voters are now packing into limited polling places, risking their lives to participate in democracy.

Related: Ohio cancels their primary due to the coronavirus pandemic, but 3 other states are holding elections

Since last month, seven primaries – Ohio, Georgia, Puerto Rico, Alaska, Wyoming, Hawaii, and Louisiana – have been postponed to late April, May, or to a date that has not yet been determined.

But Wisconsin is voting today. Gov. Tony Evers (D) postponed the election, both because public health officials wanted to limit the spread of coronavirus and because election officials have been having trouble in the past few weeks setting up polling places. Milwaukee, for example, will have five polling places instead of its usual 180.

The Republican-controlled state legislature, though, took him to court. The state supreme court ruled in a 4-2 decision that he did not have the authority to call off the election. A U.S. district court refused to postpone Wisconsin’s election, but ruled that the governor could extend absentee voting by six days to take pressure off the polls.

But Republicans appealed to the U.S. Supreme Court, which overturned the district court’s decision. All five of the Republican-appointed justices ruled that the state cannot extend absentee voting.

When Evers tried to give voters six extra days to turn in absentee ballots in order to reduce the number of people who show up to vote in person, state Republicans took him all the way to the U.S. Supreme Court, where all five Republican-appointed justices overturned the district court’s decision and ruled that absentee voting couldn’t be extended.

“The Court’s suggestion that the current situation is not ‘substantially different’ from ‘an ordinary election’ boggles the mind,” Justice Ruth Bader Ginsburg wrote in her dissenting opinion.

“It is unconscionable,” said NAACP Legal Defense and Education Fund President Sherrilyn Ifill about the Supreme Court decision. “It is among the most cynical decisions I have read from this Court — devoid of even the pretense of engaging with the reality that this decision will mean one of two things for many Wisconsin voters: either they will risk their health and lives to vote, or they will be disenfranchised.”

Evers called a special session of the state legislature to postpone the election or move to an all-mail election, but Republicans ended the session in several minutes without passing such a law.

The election is taking place today and ballots won’t be counted until April 13, CNN reports.

Wisconsin has had 2500 cases of coronavirus and 77 deaths. Even though public health officials encouraged people to stay home, Wisconsin Republican Party Chairman Andrew Hitt said that voters are “pretty determined.”

“I can’t really think of something more essential than voting,” he said.

Hitt also said that wearing a mask is “voluntary” for voting.

“I’m sure most Wisconsinites don’t have masks,” he said. “This isn’t New York City.”

The lack of volunteers and preparation for the election means that there are few polling places. The city of Waukesha – with a population of over 70,000 – has only one polling place.

Polls open in minutes. Here’s a look at the line in Waukesha, the city’s only polling location pic.twitter.com/Uqg08gannt

Oh, Andy. You’ve turned me into a Cuomosexual.