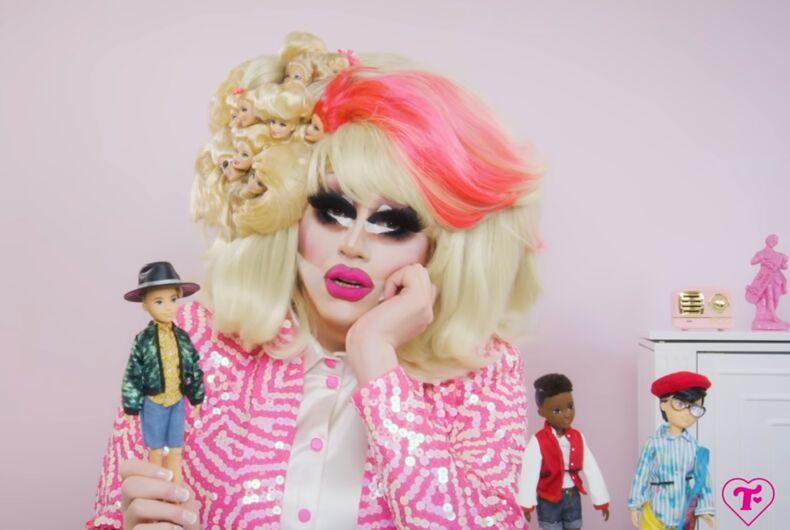 Last year, the conservative Christians at One Million Moms started an online protest of Creatable World Dolls, Mattel’s new line of gender-free dolls. “Why can’t the toy manufacturer let kids be who God created them to be instead of glamorizing a sinful lifestyle?” the group said in an email blast.

But that left America with one burning question: do they come with cute hats?

Related: Target hits back against the binary with gender neutral clothing line

Folk singer and RuPaul’s Drag Race alum Trixie Mattel posted a video where she plays with them, and the answer is yes, they are very fun.

Creatable World dolls were made without features that would lead people to assign them a gender, and their clothes and hair can be mixed and matched so that kids have “a blank canvas to create their own characters.” They don’t come with boy or girl outfits – they come with outfit pieces that can be worn by any doll in the collection.

“Kids just play whatever they want and make up whatever,” Trixie explained. “We’re the ones who tell them this is a boy or a girl toy.”

“That’s kind of more on us than it is on kids.”

Moreover, the dolls also let kids live the fantasy… the fantasy of being able to look good in hats. “Oh my god, this is what we all wished we looked like in a hat, and none of us do,” Trixie said, adding that the craftsmanship of the dolls is “stupid,” meaning well done and intricate, including a jacket with a functional zipper.

Despite her name and the content of the video, Trixie was not paid by Mattel to play their dolls.