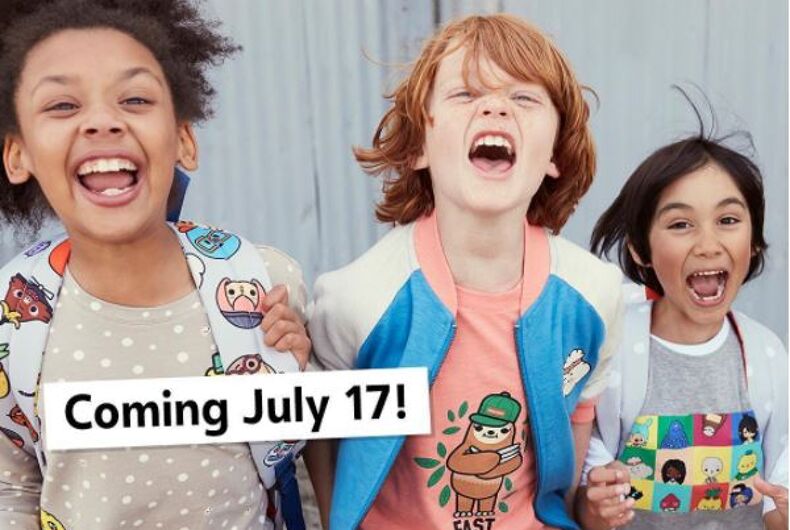 Target and Toca Boca are teaming up to bring non-gendered clothing to kids.Photo: Target Toca Boca

Target has teamed up with Stockholm-based company Toca Boca to offer a gender neutral clothing line for kids.

The line of children’s clothing will debut next week at Target stores.

The collection you’ve always wanted is coming exclusively to @Target on July 17 👉 📆 For the first time ever, we’re launching clothes, backpacks, sheets for your bed, activity books and more! Are you excited?! 👐 #tocaboca #tocalife

Toca Boca, launched in 2011 as a mobile gaming app for kids, chose to partner with Target due to the company’s progressive policies. In 2015, it announced it was doing away with labeling the toy section as “boys” and “girls.” Last year the company announced it would spend $20 million to add gender-neutral restrooms to all of their stores.

Head to toe in Toca Boca? ✌️Yes please! Clothes, backpacks and much more are coming to @Target on July 17 🎊 #tocaboca #tocalife

“Our vision for the clothing line was to do what we’re good at at Toca Boca, which is play, and translate that into everyday experiences for kids,” Mathilda Engman, the company’s design director, told Fast Co. Design.

“We worked with all the values and principles of how we design things in the digital world and translated that to the physical world,” she added.

In addition to clothing, items such as backpacks, pillows, and bedding.

The line was developed in consultation with an external diversity board comprised of professionals hailing from the academia and non-profit worlds, with a focus on gender, ethnicity, race, and sexuality, Digiday reports.

“The internal diversity board we work with uses a checklist to determine that all the products really are inclusive, that kids don’t feel excluded and that there really is something for everyone,” Ingeborn said.

“We don’t want to impose gender norms and we want to have something for everyone,” she added. “It’s important that everyone, regardless of gender, can find something. It’s been something we’ve worked on from the very start.”

Toca Boca joins a number of other companies in offering gender neutral clothing, including Free to Be Kids, Jessy & Jack, and Muttonhead.

Why is Donald Trump trying to destroy public education?