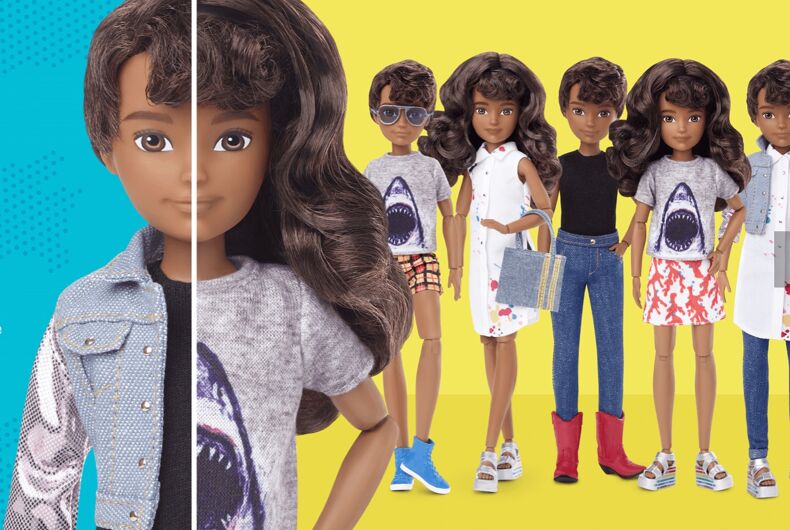 One Million Moms, the astroturf project of the anti-LGBTQ hate group American Family Association, is best known for their ridiculous boycott threats. When nothing happens, the group declares victory and moves on to another moral outrage.

This time they’re focusing their wrath on Mattel’s new line of gender-free dolls, Creatable Worlds. While the doll’s hair is short, it comes with a long-haired wig and a line of gender-neutral clothing like hoodies, jeans, and T-shirts. Unlike the popular Barbie line, the dolls do not have breasts or a boy bump.

“In our world, dolls are as limitless as the kids who play with them,” the company says in marketing materials, adding that the toys are “designed to keep labels out and invite everyone in – giving kids the freedom to create their own customizable characters again and again.”

“Creatable World gives kids a blank canvas to create their own characters. Switch long hair for short hair – add a skirt, pants, or both. It’s up to you! Mix and match, swap or share.”

This has outraged the group that normally decries the sexualization of children and a return to the good old days when… dolls were frequently gender neutral. In 1975, only two percent of toys in the Sears catalog were targeted specifically to boys or girls.

“Mattel has actually created a toy that glorifies gender inclusivity and ignores one’s biological sex. Calling ‘gender’ a label is the same as saying that being a male or female is no different than being tall or short,” the fake group’s spokesperson said in a breathless email to supporters.

“Mattel is confusing our innocent children by attempting to destroy very definitive gender lines. Why can’t the toy manufacturer let kids be who God created them to be instead of glamorizing a sinful lifestyle?”

“Mattel is following a trend to desensitize America by telling children they can be whatever gender they want to be. This irresponsible line of toys is dangerous to the well-being of our children. Mattel should avoid aiming to please a small percentage of customers while pushing away conservative customers who hold to the age-old truth that a boy is a boy and a girl is a girl.”

The doll costs $29.95. It is available at retailers nationwide.

Bernie Sanders has been hospitalized for heart problems