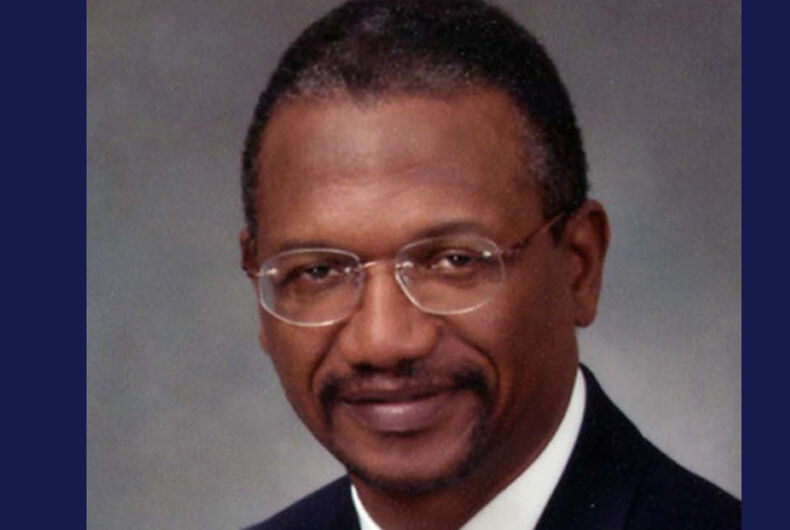 A state representative of the Texas House has reintroduced and passed a bill out of committee that would ban trans youth in the entire state from participating in sports as their gender identity.

The proposal had previously been introduced in the House Education committee after passing the Texas Senate, but stalled — until Rep. Harold Dutton, Jr. (D), upset that a bill that he championed also died in committee, decided to revive it, in spite of his colleagues who are LGBTQ allies and previously worked to end the proposal.

Dutton is the chair of the House Public Education committee, which is slightly under the control of the Republicans with seven members to the Democrats’ six.

When Senate Bill 29, which requires “interscholastic athletic team sponsored or authorized by a school district or open-enrollment charter school” to only allow participants to take part in sports under their “biological sex,” initially did not pass the committee.

When it first came to a vote on May 4, one Republican member was absent, leading to the proposal not having enough votes to pass. Dutton abstained from voting on it.

But when an unrelated bill introduced by Dutton didn’t pass, he decided to use trans youth as a pawn to further his agenda.

His bill would give Texas Education Commissioner Michael Morath the ability to take control of a school district that fails to meet state-designated academic standards, even allowing him to remove school board members. When it was introduced to the House, it failed in part because of Rep. Alma Allen (D), who is also on the Public Education committee.

According to the Texas Tribune, Rep. Lina Ortega (D) reported that Dutton said to her “something to the effect of, ‘Because of what you did, SB 29 is coming back up.’”

On May 7, Dutton reintroduced Senate Bill 29 to the Public Education committee. This time, he voted in its favor along with all seven Republicans, passing it through to face the entire Republican-controlled chamber.

“I don’t know how big this problem is,” he said, referring to trans youth participation in sports. “I wish I did, because I’d be in a better position to make this vote. But I will tell you this, the bill that was killed last night affected far more children than this bill ever will.

“So as a consequence,” he said right before the vote, “the chair moves that Senate Bill 29 as substituted be reported favorably to the full House with the recommendation that it do pass.”

In the reintroduced edition, Dutton added an amendment for the ban to last a total of six years.

.@RepHaroldDutton said from the dais that he knows #SB29 will hurt kids. He further said he brought the bill up & voted for it in retribution against his colleagues @RepAllenTX131 & @txlgbtqcaucus chair @RepMaryGonzalez about his unrelated bill that was on the floor last night. pic.twitter.com/DXzaEwTa6k

BREAKING: The Texas Legislature continues to push legislation targeting trans kids.
#SB29, an anti-trans bill, has now passed out of committee and is one step closer to the House floor.

the previously stalled ban on trans students competing in youth sports advances in the Texas legislature because one Democrat on the committee wanted to punish other dems who opposed it after they voted against a completely different bill he was pushing https://t.co/HM0PezLPqL

If it passes the House, it will go back to the Senate for amendments to be approved, then Texas Gov. Greg Abbott (R) for his signature or veto. Texas Lt. Gov. Dan Patrick (R) championed the proposal through the Senate, and the Abbott administration has already signaled it would support the bill becoming law.

Rep. Diego Bernal (D), also on the Education committee, condemned his Democratic peer for his actions.

“The vote, bringing it back up, was used as a form of retaliation by the chairman,” he said, adding that it is “soul-crushing.”

Ricardo Martinez, the CEO of Equality Texas, said in a statement, “we are already hearing from parents of transgender children who now realize their kids’ lives and dignity were used as a legislative bargaining chip. It is an incomprehensible betrayal to see a Democrat, who heard desperate testimony from children and parents, take this incredibly harmful action out of sheer vindictiveness toward his Democratic colleagues.”

The ACLU of Texas’s policy and advocacy strategist, Adri Perez, said that Senate Bill 29 “will open the door for discrimination towards any child who does not fit the gender norms expected of them.”

Amber Briggle, a mom of a trans child who had testified before the Texas legislature just last month, said to NBC News, “he’s going to take it out on my kid — how is that responsible or ethical or reasonable or justified?”

She added, “I’m just real tired of them using my kid as some sort of pawn in their weird political pissing contest.”

Both Briggle and Kai Shappley, a fourth grader that also testified before the Senate, have received death threats in the wake of their testimonies. The bill they spoke out against still passed.

Dutton has not publicly commented since his remarks, but has made social media posts sharing the words of those that support his actions.

We are already hearing from parents of transgender children who now realize their kids' lives and dignity were used as a legislative bargaining chip.

Transgender children are not any politician's pawns, and we will continue to fight for them.#ProtectTransKids #TXlege

This really needs to be underscored: Harold Dutton, a Democrat, was in his feelings today because one of his bills died so in retaliation he took his resentment out on trans kids. https://t.co/9eiID9Q5BI

All Texas kids deserve our compassion and protection. SB 29, which prevents trans youth from participating in sports, is a discriminatory piece of legislation that hurts Texas children. Join us in continuing to fight for the wellbeing of all young Texans! #txlege pic.twitter.com/O1waqrPF4Y

This kind of behavior by @RepHaroldDutton is reprehensible, using trans kids and their families as pawns for some kind of personal retaliation. We will continue working with @HoustonLGBTCoC to make sure state laws treat transgender people with dignity and respect. #LetKidsPlay https://t.co/17pBYu49Ur

Increasing diversity was believed to make America more liberal. But it may not be after all.