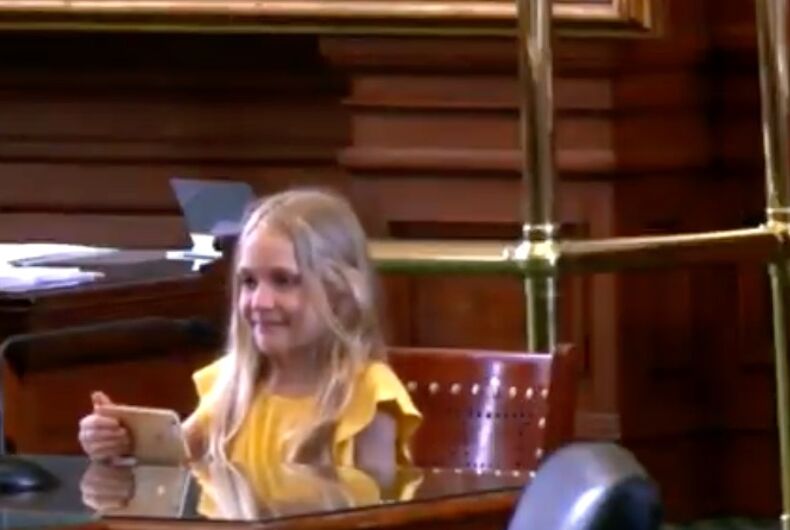 Ten-year-old Kai Shappley testified in front of the Texas Senate State Affairs Committee on Monday and schooled the legislators on how to be better adults. Shappley spoke against a proposed law that would brand her mother as a child abuser for supporting her daughter.

“God created us all in his own image,” he told the committee. “We went outside that creation by our own accord and suffer with some of the consequences of being outside his will since the garden. This is another one of those issues that we find ourselves entangled in that unfortunately, the damage is to our most precious, precious being our children, not our personal lineage, but all of God’s children and the children in this state.”

“God made me. God loves me for who I am, and God does not make mistakes,” Shappley responded.

Shappley closed her testimony with a pointed reminder to the politicians.

“I want to say thank you to those of you who are sticking up for kids like me. By the time I’m in college, you will be celebrated in the history books.”

With all the antiTrans kid legislation across the nation today it’s a good time to share our doc again. It’s only 18 minutes long & It WON AN EMMY! Ok. Can we agree on how cute I was 🥰 https://t.co/uPPgAZf2df

In 2017, Kai’s mother Kimberly Shappley talked to Good Housekeeping about being a Christian mother with a transgender daughter who “was verbalizing that she was a girl at least six times a day” since she was three years old.

“I used to lead a small ministry teaching Bible study, and I didn’t support or condone those living the LGBTQ lifestyle,” Kimberly said.

When she was four, Kimberly “stopped punishing Kai for ‘acting girly.’”