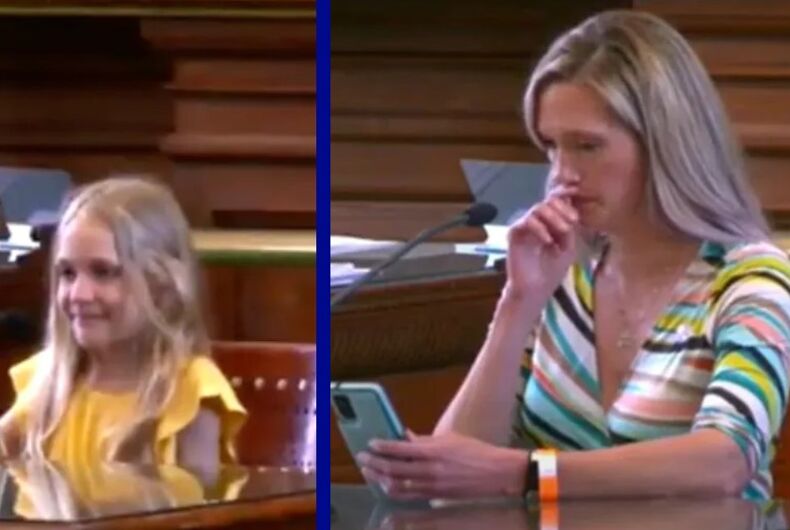 A 10-year-old transgender girl and the supportive mother of a trans child are getting death threats after their testimony before the Texas legislature went viral.

The harassment both have received has gotten so bad that the little girl’s parents are keeping her off social media while the mom has filed a police report after being told “all the ways I should kill myself.”

Kai Shappley shamed Texas Republicans last week for attacking her rights while testifying before the Texas Senate Committee on State Affairs about S.B. 1646, a bill that would redefine child abuse to include parents who allow a doctor to give their trans child gender-affirming health care.

“God made me. God loves me for who I am, and God does not make mistakes,” the fourth grader told the adults in the legislature since so much of their advocacy of the bill was based on religion. “I want to say thank you to those of you who are sticking up for kids like me. By the time I’m in college, you will be celebrated in the history books.”

Amber Briggle said that she was “terrified” to testify at the same committee hearing because her son is transgender and she supports him. She worried that by outing her family at the hearing, her son could be taken from her if S.B. 1646 passes.

“Taking that support away from him, or worse, taking him away from his family because we broke the law to provide that support – will have devastating and heartbreaking consequences,” Briggle said, fighting through tears.

Videos of both testimonies went viral, and now both Shappley and Briggle are being subjected to harassment online.

“I’m mad because the people who were elected to keep us safe and protected here in Texas are the same people who are putting my family in danger,” Briggle tweeted, explaining that she filed a police report because of “threatening voice messages.”

I'm mad because the people who were elected to keep us safe and protected here in Texas are the same people who are putting my family in danger.

Some rando (not a politician – probably?) called me. But state legislators were the ones who lit the match.

#TXLEGE DID THIS. They launched the attack & their goons couldn't wait to strike. Remember their names the next time you vote and send them the fuck home.#ProtectTransKids

Shappley’s mother posted a message to her daughter’s Twitter account, explaining to her friends and followers that she can’t use social media right now because of all the hatred she has been getting online.

“The messages and comments directed at a 10 year old have been horrifying,” her mother Kimberly Shappley explained. One of the comments the girl got was: “dumb idiot get murdered you disgusting little brat.”

Kai’s mom here. She’s not allowed on any of her social media accounts for now. The messages and comments directed at a 10 year old have been horrifying. Most recently, “dumb idiot get murdered you disgusting little brat” on her YouTube channel. https://t.co/uHaWpSfsOW

Briggle sent support to the Shappleys: “My goodness I am so sorry this is happening. Give that babygirl of yours a huge hug for me.”

My goodness I am so sorry this is happening. Give that babygirl of yours a huge hug for me.

S.B. 1646 would redefine child abuse to include “consenting to or assisting in the administering or supplying of, a puberty suppression prescription drug or cross-sex hormone to a child,” as well as other gender-affirming health care procedures, even though puberty blockers are reversible and have been found to significantly reduce suicidal thoughts for trans people.

The Texas Senate Committee on State Affairs – the committee that heard Shappley’s and Briggle’s testimonies – just approved the bill and now it’s going to the full state senate.