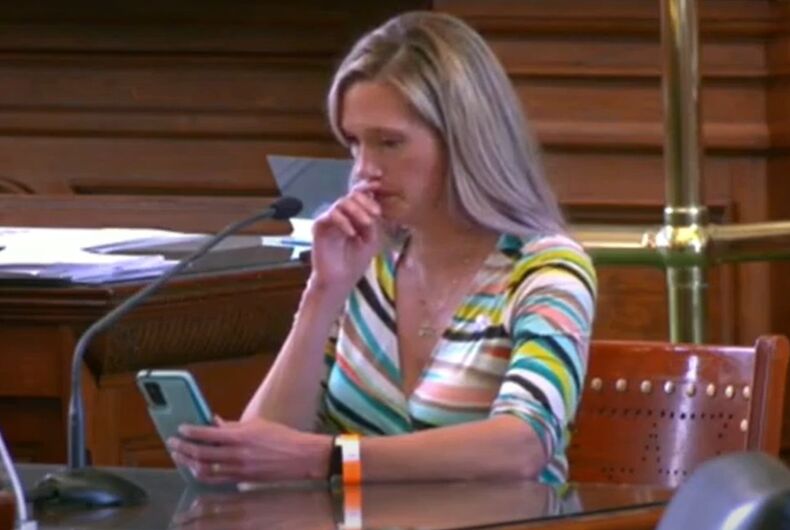 The mother of a transgender boy testified before the Texas legislature in tears as Republicans try to pass a bill to criminalize parents who support their transgender children.

“I’m terrified to be here today,” Amber Briggle told the Texas Senate Committee on State Affairs at a hearing earlier this week. “I’m afraid that by speaking here today that my words will be used against me should S.B. 1646 or S.B. 1311 pass, and my sweet son whom I love more than life itself will be taken from me.”

Texas’s S.B. 1646 would redefine child abuse to include “consenting to or assisting in the administering or supplying of, a puberty suppression prescription drug or cross-sex hormone to a child,” as well as other gender-affirming health care procedures, even though puberty blockers are reversible and have been found to significantly reduce suicidal thoughts for trans people.

And Briggle knows that first-hand.

“When my son was four-years-old, he asked me if scientists could turn him into a boy,” Briggle said, adding that she didn’t understand that he was trans. “I only knew that he wasn’t like most girls his age and that something inside him was hurting.”

She said that she learned about trans youth and found that surgery is not performed on minors, despite how much Republican lawmakers talk about surgery in the context of bills to ban gender-affirming care for minors.

Briggle also mentioned S.B. 1311, a bill that targets the liability insurance of doctors who provide gender-affirming care for trans people.

The Texas House held hearings this week for two more anti-LGBTQ bills, including one to expand religious exemptions for health care professionals that could result in doctors being able to turn away LGBTQ patients if they cite their “ethical, oral, or religious beliefs.”