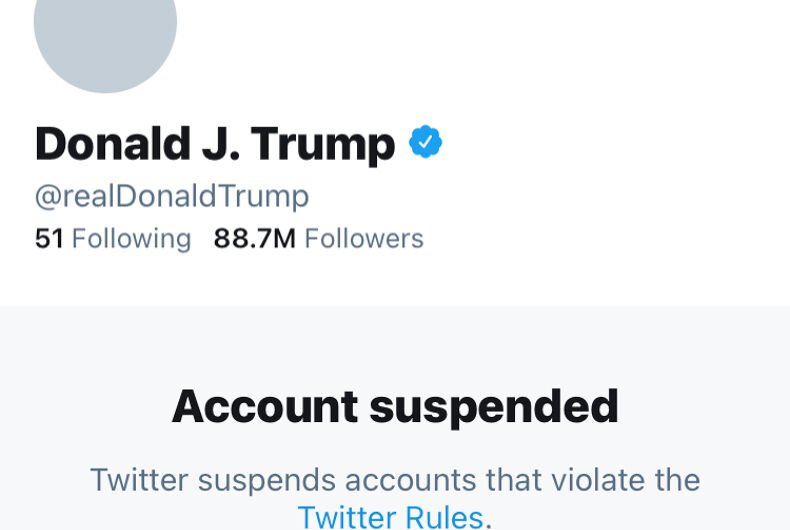 Donald Trump has finally received a permanent suspension from Twitter.

“After close review of recent Tweets from the @realDonaldTrump account and the context around them — specifically how they are being received and interpreted on and off Twitter — we have permanently suspended the account due to the risk of further incitement of violence,” the social network announced on January 9.

Twitter initially suspended Trump temporarily on January 6, following the pro-Trump U.S. Capitol riots, for at least 12 hours. Trump did not return to tweeting for hours after the initial 12 hours ended, as he had to manually delete several of his rule-violating tweets first.

But after he did, he sent veiled messages that excited extremists online, who are already planning another attack on the government. It only took two more posts for the website to end his personal account for good.

“In the context of horrific events this week, we made it clear on Wednesday that additional violations of the Twitter Rules would potentially result in this very course of action,” Twitter reflected.

After close review of recent Tweets from the @realDonaldTrump account and the context around them we have permanently suspended the account due to the risk of further incitement of violence.https://t.co/CBpE1I6j8Y

On January 8, Trump wrote, “The 75,000,000 great American Patriots who voted for me, AMERICA FIRST, and MAKE AMERICA GREAT AGAIN, will have a GIANT VOICE long into the future. They will not be disrespected or treated unfairly in any way, shape or form!!!”

Then, Trump said, “to all of those who have asked, I will not be going to the Inauguration on January 20th.”

Twitter took the statements, followed by his public declaration that he would not be at the event that would signal the end of his Presidency, as going against his own pledge for an “orderly transition” of power — and a possible invitation for further violence from pro-Trump forces or others.

“These two Tweets must be read in the context of broader events in the country and the ways in which the President’s statements can be mobilized by different audiences, including to incite violence, as well as in the context of the pattern of behavior from this account in recent weeks,” their announcement stated.

They note, “Plans for future armed protests have already begun proliferating on and off-Twitter, including a proposed secondary attack on the US Capitol and state capitol buildings on January 17, 2021.”

They would also suspend several accounts managed or belonging to Trump officials, campaign and administration staff, and further far-right voices that the President has amplified. @TeamTrump, @WhiteHouse, and other accounts were among those blocked or suspended.

In a statement, GLAAD CEO Sarah Kate Ellis thanked Twitter and urged other platforms “to follow suit.” GLAAD has also organized a petition, available at glaad.org/bantrump, for all other social media sites to ban Trump permanently.

“We will be watching and holding these platforms accountable. Trump’s rhetoric is dangerous, as was proved at the Capitol this week,” Ellis said. “Removing his ability to amplify misinformation and encourage further violence is a necessary step for the safety of all Americans.”

Over the years, Trump made several tweets that affected the LGBTQ community. He attacked LGBTQ people, such as announcing his ban on transgender people to openly serve in the military through the site. He tried to recruit LGBTQ voters, such as by saying he was the “most pro-gay president in history.” He made gaffes that LGBTQ people were quick to notice, such as when Trump tweeted in condemnation of “Rupublicans,”

But mostly, his tweets caused anguish and distress to millions around the world — like his mention of the Pulse massacre on its anniversary, after bragging in a tweet that he had “called it” when predicting that the assailant was Muslim.

He found time to feud with Lady Gaga, Bette Midler, and Rosie O’Donnell instead of focusing on winning reelection. Calls to suicide hotlines went up after his trans military service ban. He made last minute, official announcements on his formerly-personal account, such as his firing of Reince Priebus as Chief of Staff. He denigrated members of Congress for years on the platform, culminating in him standing before a crowd of his followers right outside the Congressional workplace prior to the U.S. Capitol riots.

But Trump’s tweeting became a dreaded, but expected, component of his unprecedented Presidency. Amazon even sold toilet paper depicting many of his thousands of tweets.

For years, Twitter was heavily criticized for allowing Trump to post tweets that ignored their guidelines. The website’s guidelines seemed more harshly applied to average citizens than the leader of the free world, such as those using the hashtag “#bisexual” that was banned for a short time.

With Facebook, Instagram, Snapchat, YouTube and at least one email service also blocking Trump from posting on their services, Trump will have to rely on press conferences or statements to speak to the digital public through Inauguration Day, until he joins a new social network.

Mike Pence sanctified President Trump. Now his own political career is as good as dead.