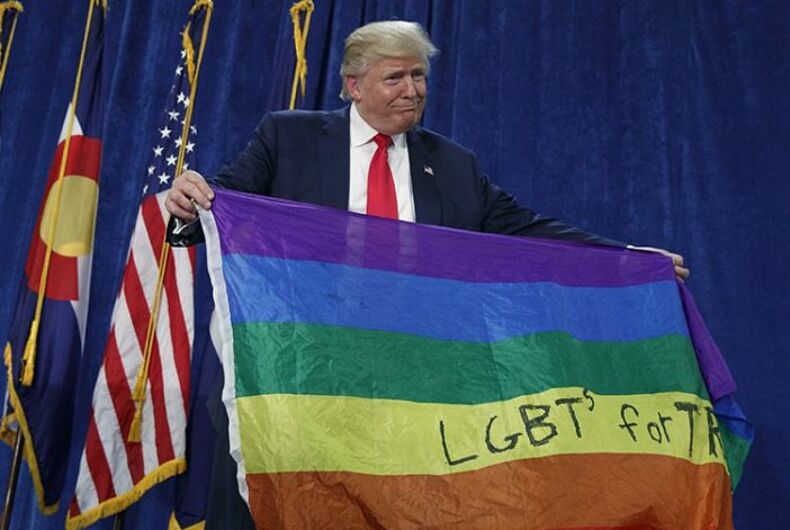 Donald Trump’s tweets calling for a ban on transgender people in the military led to more suicide attempts by trans teens.

The Trevor Project, an organization that runs a LGBTQ teen suicide hotline, posted statistics on their blog about the calls they receive.

Of the approximately 178 contacts per day (on average) received by The Trevor Project, 7.3 percent typically self-identify as transgender. However, within 24 hours after President Trump’s tweet regarding transgender military service members, contacts from transgender individuals spiked to 17.5 percent of all contacts. Furthermore, in the week after the Texas legislature introduced the anti-trans “bathroom bill,” contacts from transgender young people doubled to 14.7 percent.

In July, Trump tweeted that the US military would “not accept or allow” transgender people to serve. Military officials appeared taken by surprise and said that they were waiting for official guidance, which was reportedly provided last Friday.

While Trump cited the costs of transgender servicemembers – both in terms of money and military readiness – a 2016 RAND Corporation study of other countries that allow transgender people in their militaries showed that these costs are minimal or non-existent.

But that’s besides the point; what Trump and the Republican Party want is to use the military recruiting process as a way to express animosity toward transgender people. If the Trevor Project’s numbers are a sign of a deeper trend, then it looks like Republicans are succeeding on their own terms.

This is not the first time statistics have pointed to a correlation between public animosity toward a minority and teen suicide. Earlier this year, researchers at Johns Hopkins University and Harvard University examined survey data on teen suicide attempts from two decades and found that teens that lifted their bans on same-sex couples marrying led to a drop in the suicide rate among LGB youth.