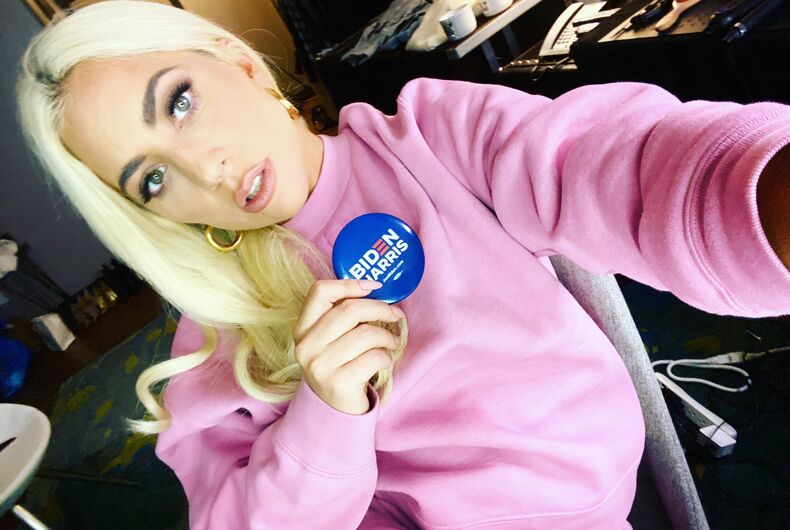 On the eve of the election, Donald Trump started a late-night Twitter feud with… Lady Gaga.

While the battle had previously been waged on his behalf by his campaign’s Communications Director, Tim Murtaugh, the president himself weighed in at 2 a.m. to accuse the pop singer of opposing fracking and therefore something something.

That’s a pic of me in Pennsylvania when I lived in Lancaster. I LOVE THIS STATE. I’m here now! This place is filled with good hearted people—good hearted people that @JoeBiden loves. He’s a good friend. He’s the President this country needs to bring us back together. #vote #Biden pic.twitter.com/3Yo4XddYId

Gaga will be rallying voters with Democrat Joe Biden in Pennsylvania today as the nominee stumps for votes in the battleground state.

Good morning PENNSYLVANIA! I’m so excited to see you today and SING for you!!!!!!! I believe in 🎶 YOU & I 🎶 !! Let’s talk about what America looks like with a KINDER President. WE NEED EVERY VOTE❤️ I’m with @JoeBiden —Lets go 24 hrs!!!!!! #Biden #AmericaNeedsPennsylvania pic.twitter.com/z0PaEZR5aF

And the Trump campaign has noticed that the liberal firebrand will be touring with Biden – and engaging her massive fan base on his behalf.

“This desperate effort to drum up enthusiasm is actually a sharp stick in the eye for 600,000 Pennsylvanians who work in the fracking industry,” he tweeted with a copy of the statement.

Trump joined in the fray this morning, tweeting, “Just learned that Sleepy Joe Biden is campaigning in Pennsylvania with Lady Gaga, a proud member of ‘Artists Against Fracking.’ This is more proof that he would ban Fracking and skyrocket your energy prices…”

A few hours later, he was back on the subject, adding, “#LadyGaga MOCKS #Pennsylvania AND IS AGAINST FRACKING! Good move Biden! Actually, Thank You! #Election2020 #Trump2020”

Gaga, however, is refusing to take the bait. Instead, she expertly dissected Murtaugh’s ridiculousness and has entirely ignored Trump so far. And that’ll be worse for the president than giving him the attention he craves.

“SO HAPPY IM GLAD TO BE LIVING RENT FREE in your HEAD,” she shot back.

Pete Buttigieg tells LGBTQ voters that “Help is on the way”