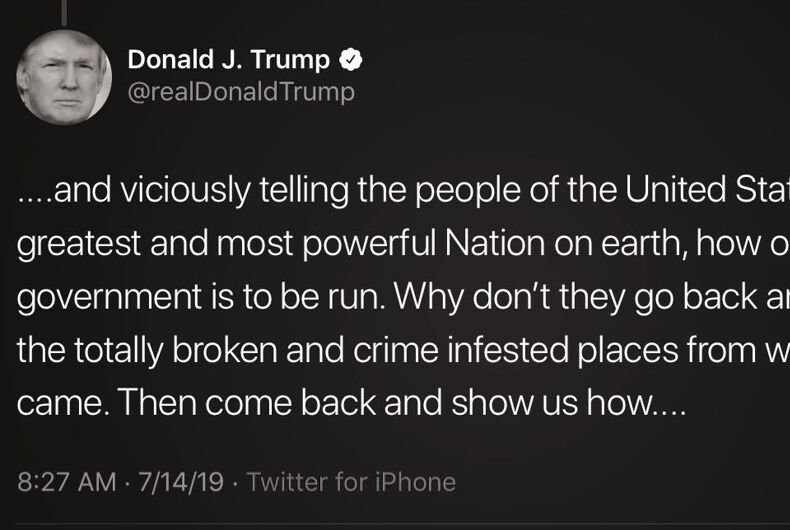 Donald Trump, the sitting President of the United States, insisted in another toxic tweet that members of “the Squad” — composed of four first-term progressive Democratic women of color in the U.S. House Representatives – should “go back and help fix the totally broken and crime infested places from which they came.”

And, he added, “You can’t leave fast enough.”

Omar, through hard work and commitment to the democratic process, has achieved the promise offered to immigrants of “the American dream” of success.

By demanding that these fine talented women who are all working for a better country and world “go back home,” Trump uses racist white nationalist tropes to further separate “the others” or “the them” from the “us” (the European heritage, Christian, “true” Americans) from the inferior “races,” whom will destroy our “great civilization.”

How many people of color have been told to “go back home to your country,” even though they were born in the United States and have lived here all their lives?

As Jews, my family and myself, while not currently constructed as “of color” in the United States, were so constructed up to World War II. Even so, people have told us to “go back to your own country, Israel, where you belong!”

Trump’s draconian policies of separating families at the southern border, dumping them in crowded unsanitary concentration camps with barely life-sustaining healthcare, nutrition, and water, while not defined as “death camps” per se, have resulted in the deaths of desperate and vulnerable people.

Donald Trump has called for I.C.E. raids to capture and deport undocumented immigrants primarily from Mexico and Central America – brown and black people who comprise “the others.”

Though large numbers of undocumented immigrants from Europe who have overstayed the terms of their visas also currently reside in the country, the White House has issued no such calls to incarcerate them in inhumane conditions and deport them back to their home counties.

Xenophobia is an unreasonable fear and hatred of foreigners or strangers, or that which seems foreign of strange. It is, however, an inaccurate term and a misnomer.

As we know in psychology, a “phobia” is defined as an “irrational” or “unreasonable” fear. For example, some people have irrational fears of insects (arachnophobia) or they fear open spaces or being in crowded public places like shopping malls (agoraphobia).

On the other hand, some fears (and forms of prejudice) are taught responses between individuals and within cultures. Xenophobia falls within this latter category. Rather than existing as irrational or unreasonable attitudes and behaviors, it exists within the realm of learned responses. It operates through the processes of stereotyping and scapegoating.

On a micro level, xenophobia (with its close allies, ethnocentrism and racism) rears its head within a nation through anti-immigrant sentiments by political leaders exerting nativist and nationalist (chauvinist, jingoist) warnings. On a macro level, xenophobia finds expression through the rhetoric of supposed “clashing civilizations.”

Throughout U.S. history, rather than characterizing refugees and refugee issues in humanitarian terms, many conservative and nationalist activists use narratives representing refugees as invading hoards, as barbarians at the gates who, if allowed to enter, will destroy the glorious civilization we have established among the “lesser” nations of the Earth.

Some people relinquished their autonomy and critical thinking facilities while pledging obedience and allegiance to powerful leaders and their social institutions. In other words, they surrender their freedom for the promise of social and personal security, which usually includes the suppression of those outside the circle, the “others” – those courageous few who reject wearing the chains of safety for the liberty of knowledge.

During the late 1940s, researchers, led by Theodor W. Adorno, studied the historical conditions that paved the way for the rise of fascist regimes in the 1930s, World War II, and the Holocaust. They theorized about individuals who supported the growth of fascism.

They suggested that people of a certain personality type, which they labeled the “authoritarian personality,” were most disposed to extremism, in this case, those most susceptible to believing anti-Jewish propaganda and anti-democratic political philosophies.

Cutting through the now-hardly coded language of “Make America Great Again” (MAGA), we understand that Trump and his minions work toward “Making America Whiter and More Protestant Christian Again.”

These gay penguins don’t have an egg to raise. So, they’re doing something different.

A gay man won $1.5 million in a discrimination suit against his state’s former governor