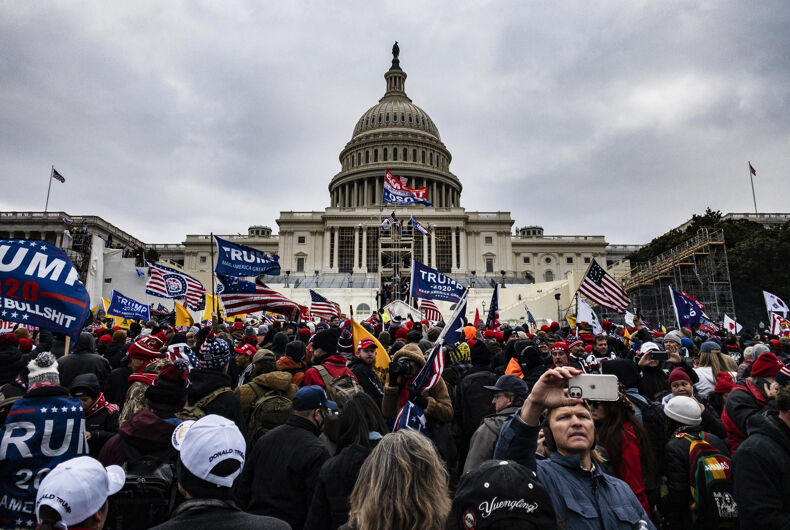 Trump supporters in the thousands swarmed the U.S. Capitol on Wednesday to commit seditious acts that were motivated by ignorance and white supremacy, which go hand in hand.

But the looting and deadly violence never would have occurred without the encouragement of a treasonous crook in the Oval Office.

Related: The Republican gaslighting has begun

President Donald Trump was the evil puppet master of this insurrectionist mob, and every second he remains in office between now and Inauguration Day on Jan. 20 poses a grave threat to our democracy.

Throughout his time in office, but especially since the 2020 election, Trump has repeatedly refused to respect one of the core tenets of our democracy — the peaceful transfer of power. More than 60 lawsuits challenging the results of a free and fair election have been dismissed, and yet he still refuses to come to grips with reality.

Even worse, Trump casually sat back and watched the mayhem unfold Wednesday from the safety of the White House. He refused to provide adequate security, risking the lives of members of Congress and their staff.

In a video posted to social media before having his accounts indefinitely locked, Trump said he loved the people committing crimes he previously argued should carry a minimum ten-year jail sentence. “We love you,” Trump said. “You’re very special.”

Entitlement, white supremacy, and a lack of respect for the rule of law were on full display in the attempted coup, all at the urging of a pseudo-strongman who thinks the best way to wield power is through his thumbs and a smartphone.

The inequity in how the overwhelmingly white rioters were treated by law enforcement Wednesday, compared to the treatment of peaceful protesters of color over the last four years, couldn’t be starker.

Millions of people peacefully took to the streets over the summer and stood up for racial justice, only to have police and federal forces — at Trump’s urging — respond with militarized sweeps, rubber bullets, and other ammunition. In June, we saw the president order the firing of tear gas on peaceful protesters for a sacrilegious photo-op.

Disabled health care activists have been dragged out of the halls of the Capitol more than once, and 100-plus LGBTQ activists were arrested during a peaceful protest in October 2019 in front of the U.S. Supreme Court.

The number of arrests made after hundreds of people stormed the Capitol in an act of domestic terrorism? 52.

Trump, of course, is not the only official who should be held liable for one of the darkest days in our nation’s history. Republicans in Congress have repeatedly echoed Trump’s lies and carried his water, spreading misinformation to sow distrust.

Now that five people died as a result of Wednesday’s riots, including a Capitol police officer, every single supporter of the president’s treasonous election claims has blood on their hands. The applause we hear coming from our enemies abroad should inspire shame — shame to be shared exclusively by Trump and his loyalists.

Republicans who retain any sense of honor must join Democrats and leaders across the country in calling on Vice President Mike Pence and/or the President’s Cabinet to invoke the 25th Amendment. If the 25th Amendment is not invoked, the House should move to introduce new articles of impeachment. We cannot wait to find out if Wednesday’s horror show was rock bottom for this failed administration.

This is not simply a time for condemnation. Those who were horrified by what we witnessed on January 6 must take action. The LGBTQ community has consistently been under assault by the Trump administration, from blocking the Equality Act (which would guarantee non-discrimination protections) to banning transgender service members from the military.

In the 2020 election, LGBTQ voters turned out in numbers nearly double their proportion of the population, according to national election polling. The impact of our votes will no longer allow officials to see us as an after-thought in the political process.

With power — even the power of one vote — comes responsibility. Too many people in our society have grown comfortable with the idea that the American way of life will sustain itself. The truth is, our democracy is fragile. Progress is incremental.

Apathy toward doing our civic duty — voting, engaging on issues that affect our communities, calling out racism and misinformation — can lead to irreparable harm, especially when one political party seeks power solely for the sake of power and personal gain.

One of the lasting images I’ll remember from this week is a picture of Rep. Andy Kim (D-NJ), who was photographed after midnight picking up trash left inside the Capitol. He didn’t have to do it, but he said he felt a personal responsibility.

I suspect the LGBTQ community as a whole will have a similar role to play in helping to clean up this mess.

I was proud to see members of Congress return to the floor late Wednesday to certify President-elect Joe Biden’s victory. Those who stood in the way of those efforts have shown which side of history they’ve chosen to align. Their disgraceful actions will not be forgotten.

All Americans must take this ominous moment in history and channel it into purpose. We must seek to repair the damage of the last four years. Connect with your local, state, and federal elected officials. Get to know them, and hold them accountable to better safeguard our democracy.

If we have learned anything from the past week, it’s that democracy is not a promise made to us, but one we make to each other.

Assemblymember Evan Low was elected to the California State Legislature in 2014 and represents Silicon Valley. He is Chair of the Legislative LGBTQ Caucus and Vice Chair of the Asian & Pacific Islander Legislative Caucus.