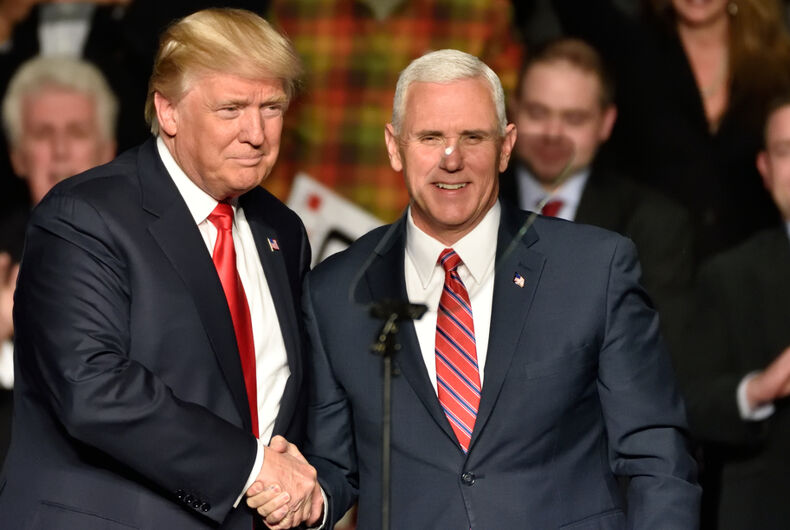 Among the many Trump acolytes who have suddenly repented in the final days of the administration, one in particular stands out: Vice President Mike Pence. For more than four years, Pence has been the sub to the president’s dom.

No matter how egregious Trump’s behavior or how outrageous his lies, Pence defended Trump every step of the way. He even used to drool repeatedly about the President’s “broad shoulders.” But with Pence’s decision to certify the Electoral College results, Pence has seen his political career come to an end.

Related: Attempts to overturn the election are using a law created because of a queer Presidential candidate

The irony is that it may be the one time that Pence did the right thing. Up until now, nothing was too extreme that Pence couldn’t accept.

When Trump had kind words for white supremacists marching in Charlottesville, Pence had something different to say: “under President Trump’s leadership, we’re gonna continue to see more unity in America.” The list goes on and on.

No wonder Trump was convinced that Pence would willingly join him in a coup attempt.

To Pence’s long-in-coming credit, all he did was decide to honor the Constitution. For this, he has earned Trump’s eternal hatred. Multiple reports say that Trump has been livid about Pence’s lack of “loyalty.”

“The thing he was most upset about and couldn’t get over all day was the Pence betrayal,” one insider told the Washington Post. “All day, it was a theme of, ‘I made this guy, I saved him from a political death, and here he stabbed me in the back.’ ”

Trump is correct that he did rescue Pence’s career by selecting him as Vice President. As governor of Indiana, Pence signed a religious liberty bill into law that resulted in a disastrous backlash and boycotts by businesses. Pence was so unpopular that the state GOP was openly hoping that Trump would select him as his running mate for fear that Pence couldn’t be re-elected governor.

Most of all, Pence’s bold, shameful anti-LGBTQ belief, even by conservative standards, had always preceded him. He is a true believer in anti-LGBTQ causes, while Trump just hoped to please voters. Trump has joked that Pence wants to “hang them all,” referring to LGBTQ people, a comment that Pence’s spokesperson refused to take exception with.

But Pence also sanctified Trump. At a time when Trump’s shady personal history still made conservative evangelicals wary, Pence provided the reassurance they needed to vote for him.

Pence is equally angry at Trump. Fueled by QAnon conspiracies such as the belief that the late John F. Kennedy, Jr. would come out from hiding somewhere and replace Pence on the ticket, the Trump-encouraged mob at the Capitol was promising to execute Pence as a traitor.

The Vice President was legitimately in danger, but the President never bothered to even call Pence to see how he was doing. Apparently, the mob could have had their way with Trump’s running mate and Trump wouldn’t have lifted a finger to stop them. Instead, Trump was phoning Senators hunkered down in offices and bunkers to try to persuade them to help him overturn the election, still.

The rift between the two puts an end to Pence’s long game for the Presidency. Pence apparently believed that if he was a loyal soldier, he would be Trump’s heir apparent. But Trump will never forgive him and will likely do everything he can to ruin Pence’s future.

At the same time, Pence’s break with Trump came far too late to salvage his reputation. As the nation’s anger at Trump continues to rise and what’s left of Trump’s reputation plummets, all of his enablers will have to pay the price for supporting him. Even in the now-divided Republican Party, Pence was too close to the President to try and separate himself from his administration. If the party doesn’t overwhelmingly disavow Trump, it’s because they’ll want him to run again in 2024, not Pence.

Pence’s decision to have himself joined at the hip to Trump means that he can’t credibly deny his own complicity. Yet he also can’t escape Trump’s own fury. Pence has no plausible future in political office, at least not in the higher chambers of office he so coveted.

As a conservative Christian, Pence should have known what happens when you make a deal at the devil. But ambition got the better of him. He’ll be paying the price for that bargain for the rest of his life.