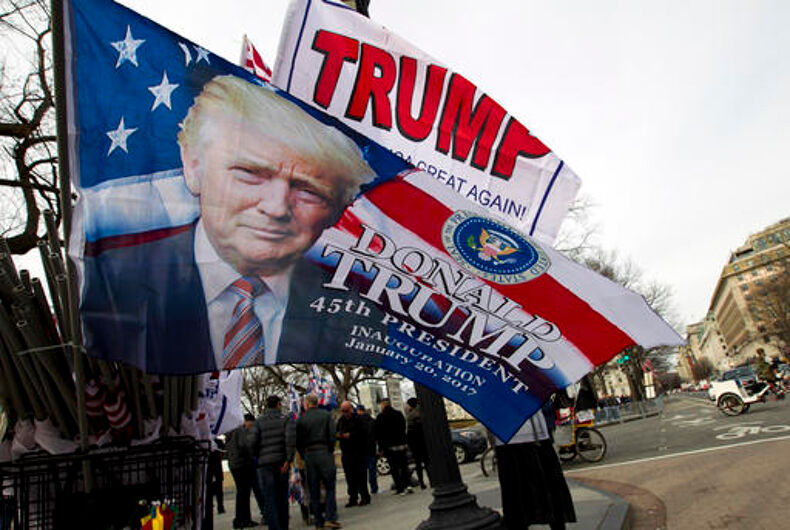 Flags with the image of President-elect Donald Trump are displayed for sale on Pennsylvania Avenue in Washington, Thursday, Jan. 19, 2017, ahead of Friday's inauguration. Photo: ( AP Photo/Jose Luis Magana)

We condemn in the strongest possible terms this egregious display of hatred, bigotry, and violence, on many sides.

In his terse and insufficient verbal response to the violence between hundreds of avowed white supremacists and anti-fascist counter-protestors in Charlottesville, Virginia, President Donald Trump blamed the deadly fascist violence “on many sides.”

Again, Trump refused to repudiate members of the alt-right for instigating their clearly fanatical rhetoric directed against anyone who appears and thinks differently from themselves.

We have long since past the point where it is merely hyperbole to compare the rise and control of the Nazis in the 1920s and 1930s to the rise and possible total take-over of fascism in the United States and in some other countries around the world.

In both German Nazism and in U.S.-style alt-right fascism, strong leaders whipped up dehumanizing stereotypes resulting in the scapegoating of already-marginalized groups of people to blame for causing past problems and posing clear and present dangers to the state.

The United States Holocaust Memorial Museum is deeply alarmed at the hateful rhetoric at a conference of white nationalists held on November 19 [2016] at the Ronald Reagan Building just blocks from the Museum…The Holocaust did not begin with killing; it began with words. The Museum calls on all American citizens, our religious and civic leaders, and the leadership of all branches of the government to confront racist thinking and divisive hateful speech…

These words from a press release of the United States Holocaust Memorial Museum in Washington, DC refers to a white nationalist conference headlined by neo-Nazi Richard Spencer, who greeted attendees with a tribute to then President-elect Donald J. Trump shouting “Hail Trump! Hail victory!” from the stage before all in attendance gestured in a traditional Nazi straight-arm salute.

Once identifying himself as a Democrat, Donald Trump has transformed himself into the mouthpiece of the far-right of the Republican Party.

On the right-wing side of the authoritarian strongman political spectrum, we find the philosophy and practice of “fascism.” While also deployed as an epithet by some, fascism developed as a form of radical authoritarian nationalism in early-20th century Europe in response to liberalism and Marxism on the left.

While many government leaders and candidates for public office may push for a number of these tactics while remaining outside fascism, the cumulative effect increases depending on the severity of and the degree to which they initiate these measures.

Donald Trump, in what he has stated and proposed, falls directly within the parameters of fascism. Using Britt’s taxonomy, I filled in Trump’s positions:

1. Appeals to nationalism, presented in the guise of populism, feeding on people’s fears and prejudices, which has already resulted in the segregation of people and nations from one another, and threats and dangers of violence;

2. Rolled back many of the rights and protections minoritized peoples have tirelessly fought for over the decades: reproductive rights, transgender rights, voting rights, citizenship rights, anti-torture guarantees, rights of unreasonable search and seizure, rights of assembly, disability rights, freedom of religion, possibly marriage equality, environmental protections of all kinds. Recall, as well, his father Fred Trump and his refusal some years ago to rent Trump properties to black people, over which they were sued and eventually signed a consent decree;

3. Scapegoating of already disenfranchised identity categories as the internal and external enemies of the United States: Muslims and anyone from Muslim-majority countries, Mexicans and all Latinx people, urban “thugs,” transgender people, the press, Somalis, President Barack Obama, the ACLU, liberals, etc.;

4. Toxic misogynistic utterances and allegations of sexual harassment by numerous women, which have reached historic proportions;

5. Promises to enlarge and improve our “failing” military, fire generals whom Trump “knows more than about ISIS,” and extremist rhetoric toward nations by threatening nuclear annihilation;

6. Threats to employ libel laws to sue the “crooked and lying” media (Lügenpresse, “lying press” popularized by the German Nazis to silence opposition);

7. Continual cries against “Islamic jihadist terrorists” as the number one threat to our nation, increased calls for travel bans from majority-Muslim countries, and a call for a “national registry” and surveillance to track U.S. Muslims’ movements;

9. Promises of a deregulated corporate business sector with massive tax cuts and other financial incentives. “I will formulate a rule which says that for every one new regulation, two old regulations must be eliminated.”;

10. Implied reduction in the rights of workers to organize and negotiate collective bargaining agreements, privatization of entitlements, advocacy for the abolition of a national minimum wage (while relenting somewhat to a $10 minimum wage for the present time at least);

11. Resentment and attacks on the political, media, and intellectual “elites” to the point of instigating scorn and harassment against the “elite media” covering Trump’s rallies and demanding an apology from the cast of the Broadway show, Hamilton: An American Musical for voicing concerns over a Trump presidency with VP-elect Mike Pence in attendance.

The media should be embarrassed and humiliated and keep its mouth shut and just listen for a while… The media here is the opposition party. They don’t understand this country. They still do not understand why Donald Trump is the president of the United States.

In his admission to “deconstruct the administrative state,” Bannon apparently wants to dismantle the free press. The Trump administration’s obvious “divide and conquer” or “divide and rule” (Latin dīvide et īmpera) strategy it hopes will have the effect of inhibiting the media from unifying and establishing a strong block to push for the truth by competing for the limited crumbs in the mirage of the tasty press-access pie.

12. Near obsessive calls for “law and order” involving draconian (and possibly unconstitutional) measures of torture and surveillance;

13. Increasing deployment of his adult children and son-in-law as close trusted political operatives, who even meet with visiting diplomats and have been sent to foreign capitals to negotiate political and business deals, plus continuously unresolved conflict-of-interest issues between his position as President and his worldwide business interests;

14. Assisted by the larger Republican Party and the Supreme Court, gutting of the 1965 Voting Rights law, which has resulted in voter suppression campaigns effectively reducing the number of polling stations in primarily minoritized racial communities, and limiting days and times for pre-election-day voting. In addition, another fascist ruler, Vladimir Putin, weighed-in on Trump’s side to sway the presidential election in Putin & Trump’s favor.

The Holocaust did not begin with killing; it began with words.

During Trump’s relatively brief time in office, his administration’s words have translated into policy and now into violent actions by some of his most staunch supporters.

Donald Trump speaks the language of the alt-right with his alt-facts within his alt-reality universe.

The difference between the great successes of the Nazis and the ultimate defeat of the Trump regime in the not-too-distant future, though, is that while relatively few individuals and national leaders stood up early to the Nazis by forcefully calling them out and intervening, the unprecedented outpouring of resistance, protest, and intervention – including in the streets of Charlottesville – by individuals and entire nations will and must shift the balance of power back to “we the people.”

Charlottesville is proof that white people are not oppressed