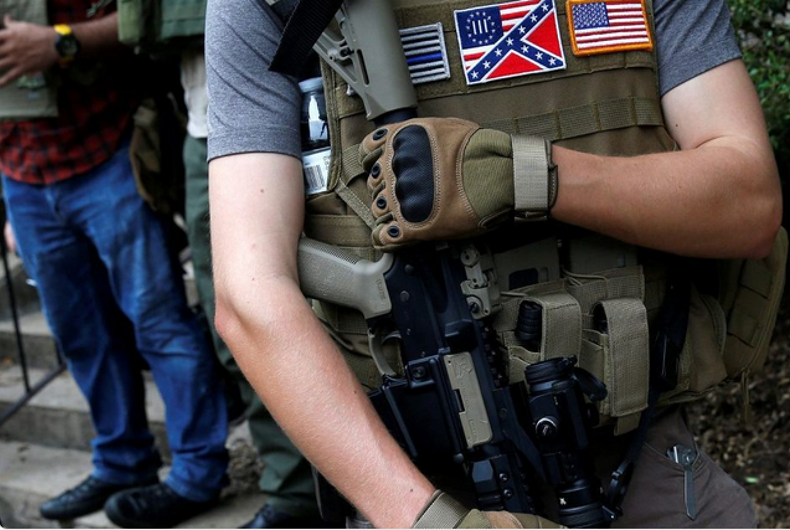 In the next week, there will be a lot of hot takes about how the white supremacist rally happened in Charlottesville yesterday. A lot of those takes will focus on the feelings of oppression that white, straight, Christian (mostly) men harbor, how they were just reacting to elites telling them what to believe, how it’s really just economic anxiety.

Before wasting precious compassion on these protestors, though, consider: 1) the protest happened, and 2) protestors were not outnumbered by police officers.

Charlottesville chief of police Al Thomas produced an affidavit in an attempt to get the protest moved that included what they knew about the expected attendees.

While those four groups have a constitutional right to peacefully protest, it’s pretty obvious that they were looking for a fight.

The first group, Alt Knights, is an organization made up of young white men who like to fight. Here’s what founder Kyle Chapman posted on Facebook when he announced the group’s formation: “We don’t fear the fight. We are the fight…. [Alt Knights] is for those that possess the Warrior Spirit. The weak or timid need not apply.”

The second group, the Ku Klux Klan, needs no introduction. Right in the first paragraph of the Wikipedia page on the KKK it states, “Historically, the KKK used terrorism—both physical assault and murder—against groups or individuals whom they opposed.”

The third group, “3% Risen,” is the newest of the bunch and there isn’t much information about them online other than that they protested the removal of a Confederate statue last month. There are some obvious red flags, though: the affidavit implies that they’re being represented by a Klan “Imperial Wizard,” and their name is a reference to the 3% of the American population that took up arms against the British in the Revolutionary War (historians think the number is more around 15%, actually).

With a name like that, it’s no wonder they would attract racists who want to fight.

The last group is a militia. By definition, a militia is a violent organization.

And all these groups were getting together to protest the removal of a statue of Robert E. Lee, who led an armed rebellion against the United States government.

So, one would think, the police would be everywhere in Charlottesville. If the protestors weren’t white, the governor would have called in the National Guard before the first protestor showed up on Friday night.

But, according to one witness, the police weren’t too alarmed.

“There was no police presence,” [Brittany Caine-Conley, a minister at Sojourners United Church of Christ] said. “We were watching people punch each other; people were bleeding all the while police were inside of barricades at the park watching. It was essentially just brawling on the street and community members trying to protect each other.”

Deandre Harris, an African American man who was beaten by a group of white supremacists, said, “The beating happened right beside the police department, and no police were there to help me at all.”

Earlier in a parking garage in #Charlottesville – white supremacists beat this black kid w/poles. [Photo for by @zdroberts @NationofChange] pic.twitter.com/LLPBPjb8si

When a car ran through a crowd of anti-racist counter-protestors, it took police some time to show up.

When police showed up after several minutes, they were met with angry cries from some in the crowd who felt the response was too slow.

“Where were you?” one of the protesters demanded. “Where the [expletive] were you?”

If over 1000 armed, non-white people with a history of violence announced that they were rallying in a city, would any street corner not have a gaggle of cops on it?

Perhaps the most revealing statement came from Governor Terry McAuliffe, defending the police in the aftermath:

Governor McAuliffe also defended the police response, saying, “It’s easy to criticize, but I can tell you this, 80 percent of the people here had semiautomatic weapons.

“You saw the militia walking down the street, you would have thought they were an army,” he added. “I was just talking to the State Police upstairs; they had better equipment than our State Police had,” he said, referring to the militia members. “And yet not a shot was fired, zero property damage.”

Can you imagine a group of people of any other race marching into a city like that? Especially if they belong to violence organizations? Would anyone be applauding them for just beating people up and driving cars through crowds, but not opening fire?

White nationalist leaders are having a big sad that the police shut down their event, claiming that it’s more proof that they’re oppressed.

It’s not. White people aren’t oppressed. This protest is more proof that they’re not.

What we saw in Charlottesville is fascism