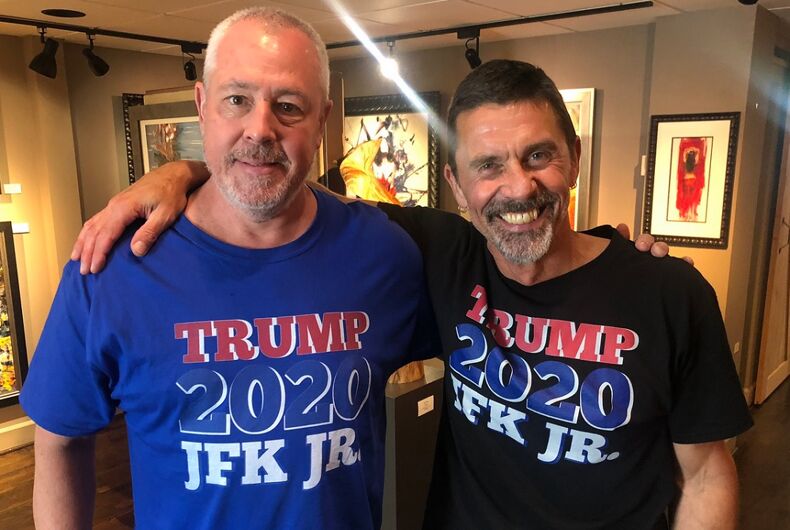 Some QAnon conspiracy theorists were disappointed this weekend after Donald Trump did not announce that he was dropping Mike Pence as his running mate and replacing him with John F. Kennedy Jr., the late son of President John F. Kennedy.

QAnon is a complex conspiracy theory that says that there is an international Satanic pedophile ring involving Hillary Clinton and Tom Hanks that Trump is secretly working to take down. And some of these people were so certain that Trump was going to announce this weekend that JFK Jr. had faked his own death and would be his new running mate that they even made T-shirts.

The QAnon folks said that Trump would hold a rally in Dallas announcing JFK Jr. as his running mate on October 17, said Travis View, who hosts the QAnon Anonymous and researches conspiracy theories. That was last Saturday.

“Big day in the ‘JFK Jr lives’ sect of QAnon as the man himself is expected to reveal himself and replace Pence as Trump’s running mate at the Dallas rally,” he wrote.

Big day in the "JFK Jr lives" sect of QAnon as the man himself is expected to reveal himself and replace Pence as Trump’s running mate at the Dallas rally. pic.twitter.com/mUFkjk6mk2

He even shared pictures of QAnon theorists in “Trump/JFK Jr. 2020” T-shirts and holding masks of JFK Jr.’s face with a MAGA hat edited on him.

Besides the fact that it didn’t happen, some problems with the theory are that Trump was in Michigan on October 17, JFK Jr. has been dead for over 20 years, and John-John was far from a Republican: he helped several Democratic campaigns involving family members and supported liberal causes including the anti-Apartheid movement and gun control.

In 2018, QAnon believer Liz Crokin asserted that JFK Jr. had actually faked his death in 1999. By 2019, the conspiracy theory also said that JFK Jr. was hiding out as a financial services professional in Pittsburgh and would soon show himself at a Trump rally.

The conspiracy theory also includes a fake quote in which JFK Jr. supposedly referred to “my dear friend Donald Trump” and said that he “would be an unstoppable force for ultimate justice” if he ever “decided to sacrifice his fabulous billionaire lifestyle to become president.” PolitiFact rated that quote as “False.”

But it’s not clear what the QAnon conspiracy theorists have against Mike Pence.

Earlier this year, Pence was asked about it on CNN and he said, “We dismiss conspiracy theories around here.”

Trump, on the other hand, has been loathe to call out QAnon, saying at a press conference: “I understand that they like me very much, which I appreciate.”

Historical photos of men in love: Under the paper moon