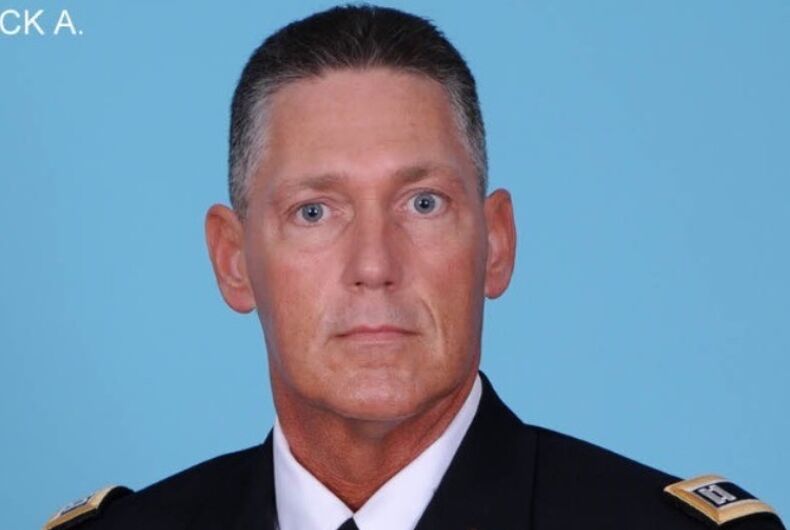 Texas assistant attorney general Nick Moutos has been fired after his violent, anti-LGBTQ, and anti-Muslim tweets – many of which promoted bizarre conspiracy theories – got media attention.

“How is it ‘Bigoted’ to say that #LGBTQ is an #Abomination?” Moutos tweeted earlier today. “#God in the #Torah & #Jesus in the New Testament call it a #Sin & abomination. I don’t hate them, but cannot condone the behavior.”

The watchdog group Media Matters published a report yesterday that contained screenshots of Moutos’s numerous unhinged tweets, which were written in the past few months. Moutos has worked for Texas attorney general Ken Paxton (R) since April 2017.

“‘Trans People’ are an abomination and have a mental disorder,” he wrote in a tweet from April with the hashtag #Jesus.

In another tweet from the same month, he said that the ACLU “is busy spreading the lie that ‘trans girls are girls!'”

Moutos spread the conspiracy theory that Michelle Obama is secretly a transgender woman – which the far-right show Infowars recently suggested was part of a larger conspiracy to control Americans – and then misgendered her by referring to her as Barack Obama’s “husband” and with “he” pronouns.

Many of the tweets promote the QAnon conspiracy theory, which says that a mysterious person named “Q” is trying to tell the world about how Hillary Clinton, Tom Hanks, Ellen DeGeneres, and other powerful people are running an international child sex trafficking ring that Donald Trump is secretly working to end.

“#Q must be getting close to #OutingYou as a #Pedophile or #ChildTrafficker or perhaps involved with #PizzaGate,” Moutos tweeted on July 22, 2020. “PizzaGate” refers to the more specific conspiracy theory that the child sex trafficking ring is being run from a pizza restaurant’s basement in D.C. The conspiracy theory resulted in an armed gunman in 2016 going to the restaurant, even though it doesn’t have a basement.

Moutos repeatedly attacked Rep. Ilhan Omar (D-MN) and Rep. Rashida Tlaib (D-MI), as well as other Muslims, accusing them of being terrorists and trying to destroy the U.S. Moutos suggested sending the two Congresswomen to “Gitmo.”

He lobbed insults at the Black Lives Matter movement, repeatedly referring to it as “Civil War 2” and is part of a “Deep State Coup.”

“Barack Obama, I pray to meet you on the #CivilWar2 battlefield,” he tweeted in response to a June tweet from Obama that supported the protests. Moutos used the hashtag #2A, which is used to suggest gun violence.

“WAKE UP AMERICANS & FIGHT BACK! Civil War has BEGUN,” Moutos – who was a prosecutor until yesterday – tweeted.

When asked for a comment for the Media Matters report yesterday, the Texas’ Office of the Attorney General wrote: “Thank you for bringing this to our attention. We’re looking into the matter and will address it as appropriate.”

He lost his job later that day.

Moutos was soon back on Twitter, saying he was just trying to fight “#Pedophilia” and “#ChildTrafficking” and suggested that being fired violated his free speech rights.

I oppose the #Censorship of #FreeSpeech & #Purging of QAnon followers & supporters. Q does not support violence. I support #2A & promote #SelfDefense. I have warned terrorists to stay away & will defend myself & my family. How is fighting #ChildTrafficking & #Pedophilia bad? https://t.co/uiGcSWBmOV pic.twitter.com/W2Vj2QTwz1

And he reiterated his belief that being “#LGBTQ” is an “abomination.”

How is it “Bigoted” to say that #LGBTQ is an #Abomination? #JohnsHopkins psychiatrist #PaulMcHugh stated so & the DSM-V gives it a diagnostic code. #God in the #Torah & #Jesus in the New Testament call it a #Sin & abomination. I don’t hate them, but cannot condone the behavior.

Moutos ran for the U.S. House seat from Texas’s 35th District and lost in the Republican primary on March 3, 2020. His campaign website has a large section on human trafficking but does not mention QAnon.

Pro-LGBTQ church breaks away from the United Methodist Church