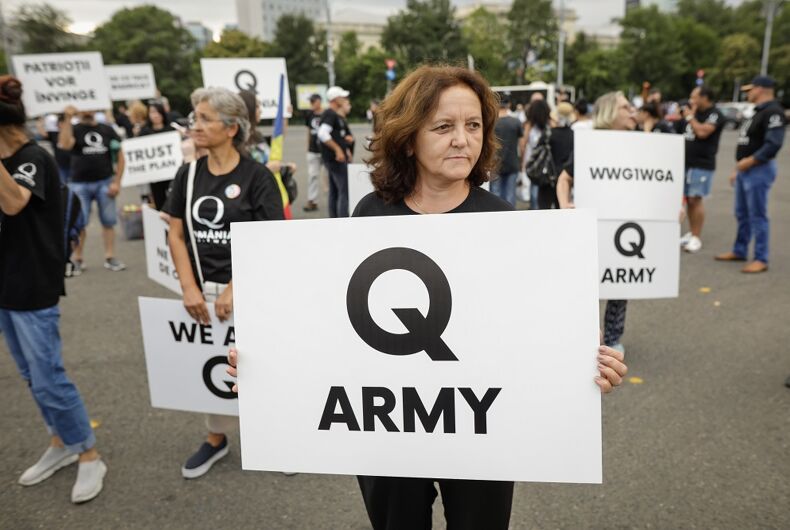 When asked by a reporter during a White House briefing about the QAnon movement, Donald Trump appeared to court its support by replying that “I heard that these are people that love our country.” He asserted that he had not heard much about them, “other than I understand they like me very much” and “it is gaining in popularity.”

QAnon is an umbrella term for a movement that spreads conspiracy theories that top U.S. military officials recruited Donald Trump to run for president to expose and vanquish the “deep state” tied to a cabal of Satan-worshiping pedophiles who operate a child sex trafficking ring, which ultimately kill and eat the children they abuse to extract a life-extending chemical found in youthful blood.

Related: QAnon conspiracy theorists are rallying for Trump, but why?

QAnon alleges this cabal includes high visibility powerful people such as Barack Obama and Hillary Clinton, Oprah Winfrey, Tom Hanks, Ellen DeGeneres, and George Soros, plus Pope Francis and the Dalai Lama among others who control the media, as well as important politicians.

The movement grows even as other conspiracies it forwards have proven untrue. During Trump’s July 4th rally speech, QAnon adherents believed that the late John F. Kennedy Jr. would resurrect from hiding to claim his rightful position as Trump’s Vice-Presidential running mate.

Following her election, Trump praised her with his burning Twitter fingers as a “future Republican star…. Marjorie is strong on everything and never gives up – a real WINNER!”

Though the FBI brands QAnon as a domestic terrorism threat, Trump obviously cares not about the dangers posed by this movement, but instead considers it a group of supporters he can mine in his reelection efforts.

But conspiracies of pedophile sex trafficking rings who engage in molestation and murder falls into the category déjà vu all over again.

A crucial point in the psychology of scapegoating is the representation of minoritized “others,” in historian John Boswell’s words, as “animals bent on the destruction of the children of the majority,” and dominant groups have long accused both Jews and LGBTQ people of acting as dangerous predators intent on ensnaring, torturing, and devouring primarily women and children of the dominant group.

In the year 1144 began the so-called “Blood Libel” in England when Christian leaders accused Jews of slaying William of Norwich, a Christian male child, to use his blood in the making of the sacred Jewish matzos. Many Christians believed that Jews used the blood of Christian youth because it was virginal and innocent and, therefore, was the most potent medication to heal hemorrhoids, to relieve pain during circumcision, to increase fertility, and to cure the so-called “stink of the Jews.”

Also, in line with the assertion of Christian leaders that Jewish men menstruate because they practice circumcision, Jewish men and women need the blood from Christian youth to replenish their bodies of the blood lost during menstruation.

In 1475, Simon of Trent in Northern Italy, the son of a tanner and barely three years old, was allegedly killed by the Jews for his blood. Christians also accused Jews of slaughtering Christian male youth because they wanted to symbolically re-execute Jesus.

Local leaders falsely indicted several Jews in Trent for Simon’s death, and they ordered Jews in the area killed. The charge of ritual murder continued into the 20th century Christian clergy have also accused Jews of inflicting circumcision on Christian infants as a means of inflicting involuntary conversion to Judaism (“recruitment”).

Although in the overwhelming majority of cases close family members – primarily men who identity as heterosexual – are the ones who abuse and molest youth, the cultural perception persists that primarily gay and bisexual men — and by association, lesbians and trans people — prey on the young.

For example, Focus on the Family, a conservative Christian media ministry organization, asserted in published accounts in 2010 that gay rights advocates are forcing their viewpoints (their so-called “gay agenda”) in schools in the guise of bullying prevention.

Focus on the Family spokesperson, Candi Cushman, argued that gay activists are the real schoolyard bullies while conservative Christians are the victims. According to Cushman, “We feel more and more that activists are being deceptive in using anti-bullying rhetoric to introduce their viewpoints, while the viewpoint of Christian students and parents are increasingly belittled.”

The state-endorsed pro-homosexual teacher/teen ‘Teach Out’ held at Tufts University in Boston in March has outraged concerned citizens. There’s growing concern among parents over the use of tax dollars to fund homosexual recruitment programs in the public schools. During the Teach Out, state HIV instructors taught teenagers how to engage in deviant sex acts and they also taught teachers how to indoctrinate children into accepting homosexuality as normal.

Former beauty queen and Florida Orange Juice Commission spokesperson, Anita Bryant, spearheaded her so-called “Save Our Children” campaign, which succeeded in overturning a gay-rights ordinance in Dade Country, Florida in 1977. The ordinance was finally reinstated in 1998.

According to Bryant, “a particularly deviant-minded [gay] teacher could sexually molest children.”

These stereotypes have been codified further institutionally. The 1992 Republican Party Platform openly endorsed this form of oppression, stating that “We oppose any legislation or law which legally recognizes same-sex marriages and allows such couples to adopt children or provide foster care.” In fact, some states still explicitly ban LGBTQ people from adopting or serving as foster parents.

In recent years, the fear of pedophilia has been used to justify the previous ban on gay and bisexual boy scouts and scoutmasters, as argued by Rob Schwarzwalder, 2013, Vice President of the conservative Washington, DC-based public policy and lobbying organization, Family Research Council (FRC), which the Southern Poverty Law Center defines as a “hate group”:

The reality is, homosexuals have entered the Scouts in the past for predatory purposes.

Tony Perkins, FRC President, in a 2011 fundraising letter for the organization addressed the LGBTQ communities’ so-called public promotion of homosexuality to youth, wrote:

The videos are titled ‘It Gets Better.’ They are aimed at persuading kids that although they’ll face struggles and perhaps bullying for ‘coming out’ as homosexual (or transgendered or some other perversion), life will get better.

It’s disgusting. And it’s part of a concerted effort to persuade kids that homosexuality is okay and actually to recruit them into that lifestyle.

A stereotype is an oversimplified, preconceived, and standardized conception, opinion, affective attitude, judgment, or image of a person, group, held in common by members of other groups. Originally referring to the process of making type from a metal mold in printing, social stereotypes can be viewed as molds of regular and invariable patterns of evaluation of others.

Though every person is unique in many ways and is multidimensional, when dominant groups stereotype any group of people, they are reducible to a single trait.

Stereotyping can and often does result in singling out individuals and groups as targets of hostility and violence, even though they may have little or nothing to do with the offenses for which they stand accused.

This is referred to as scapegoating. With scapegoating, there is the tendency to view all members of the group as inferior and to assume that all members are alike in most respects. This attitude often leads to even further marginalization.

We must hold Donald Trump and all people who support and promote these and all bogus conspiracy theories accountable for the further marginalization and for the harassment and possible violence that often results.