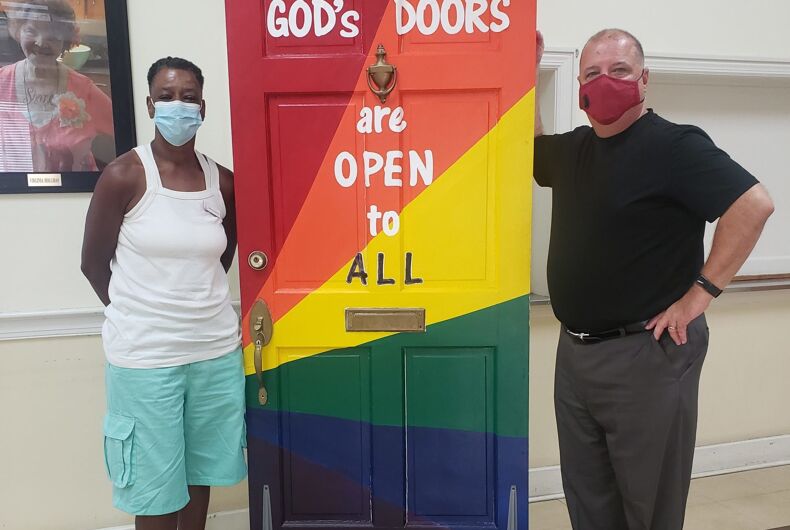 Rev. Billy Hester (right) and a congregant of Asbury Memorial Church, in front of the model of "God's Door" placed in the Church.Photo: Provided

The Asbury Memorial Church in Savannah has officially become the first church in Georgia to disaffiliate from the national United Methodist Church due to the growing rift between pro- and anti-LGBTQ people in the Protestant denomination.

“It is believed that Asbury Memorial is the first church in the USA to leave the United Methodist denomination due to its unequal treatment of LGBTQ people,” the church said in a statement.

Related: LGBTQ Methodists were stuck loving a church that didn’t love them back. Sound familiar?

Following the decision, Asbury Memorial voted overwhelmingly in favor of leaving the United Methodist Church – 309 congregants to 7 – last September, before the “reinforcement” went into effect this January.

On August 15 of this year, the South Georgia Conference of the United Methodist Church met virtually and voted in favor of Asbury’s disaffiliation.

“Asbury Memorial has always been a welcoming, all-inclusive congregation and we are excited about our future as an independent non-denominational church,” Senior Minister Rev. Billy Hester has said. “Our worship and ethos will continue to be based on Wesleyan theology – which is at the root of the Methodist church. However, we are now freer to work closely with other spiritual leaders in Savannah and beyond, and lead the way as the church we want to be.”

This wasn’t Asbury Memorial’s first trek into protesting the UMC’s anti-LGBTQ policies. When the UMC ultimately refused to allow certification of same-sex marriages, Asbury Memorial stopped doing weddings between anyone in February 2016.

Now that they no longer have to adhere to United Methodist doctrine, Asbury Memorial is “looking forward to resuming these ceremonies, when it is safe to do so after the threat of COVID-19 has lessened.” They also plan for an event to recognize unions certified at ceremonies outside of Asbury Memorial over the last 4 years – including Hester’s own daughter.

“Our LGBTQ community is vital to the thriving congregation we have today,” Hester told NBC News, estimating that 35% of their members identify as LGBTQ.

Asbury Memorial’s high profile disaffiliation is the latest in a saga that has dragged on for years within the United Methodist Church. Despite several churches and their members fighting for the UMC to become more LGBTQ-friendly, the Church’s anti-LGBTQ stance has been reaffirmed repeatedly by leadership.

This includes a Texas retired Methodist pastor setting himself on fire in 2014 to protest the Church’s history of discrimination, leading to his death.

“The Traditional Plan’s success was because of an alliance of conservatives from the U.S. and overseas,” Asbury says in its press release. The “Traditional Plan” vote was passed by 54.5% of United Methodist’s clergy members. Approximately 43% of those members voted from abroad, especially from Africa, Asbury says.

The United Methodist Church was expected to break into separate denominations, but the coronavirus pandemic has impeded such massive changes.

Hester thanked the South Georgia Conference for “understanding our situation and allowing us to take this path.” The Conference did not answer questions from NBC, other than to state that Asbury Memorial is “not the first to [disaffiliate] in the United States.”

It’s not known if any of the parishes that left following the reaffirmation of the “Traditional Plan” did so solely over LGBTQ issues.

For now, Asbury plans “a series of new initiatives during September to celebrate this new era,” albeit virtually.

Welcome to the new Asbury Memorial Church, where all people are invited to experience God's love in worship, sacrament…