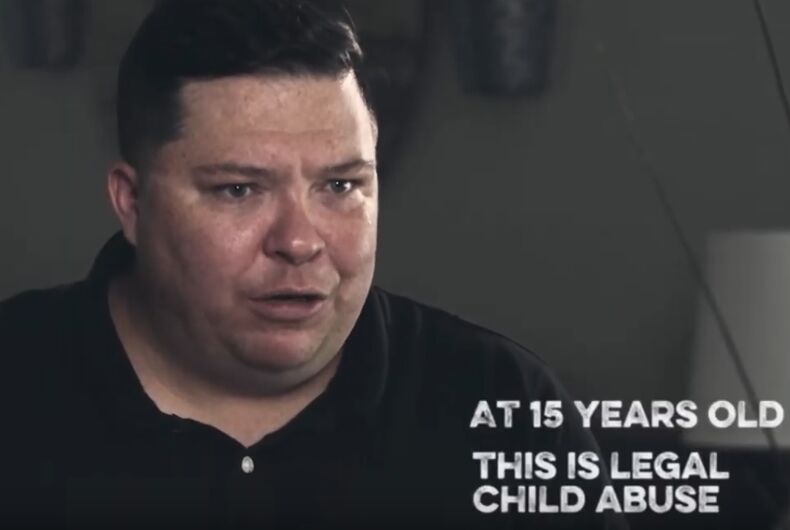 The ads, which were created by the American Principles Project (APP), argue that Biden and Peters support “treatments to change the gender of a child” while displaying images of prepubescent children and discussing “sex change surgeries,” even though gender affirmation surgery for children that age is unheard of in the U.S.

Two of the ads feature former drag performer Kevin Whitt, who has said he is both ex-trans and ex-gay. He has claimed that God showed him his “true identity” as a cisgender, straight man and his “desires to do drag, party, or have sex lessened.”

“I did not come to Christ seeking change in my sexuality,” he says on the website for Changed, an anti-LGBTQ organization. “I simply came to Him with the desire for a healthy life. He did the rest.”

In the ad, Whitt says that children “need time” to develop a sense of gender. Instead of presenting this as an argument for letting children be who they are, he calls affirmation of a child’s gender identity “legal child abuse.”

As proof that Biden and Peters “support gender change treatments for minors,” the ad cites the Equality Act. The federal bill would add sexual orientation and gender identity to federal civil rights legislation, banning discrimination against LGBTQ people in employment, housing, public accommodations, and other areas. The bill does not force any form of medical care on minors.

The third ad that APP is running is an updated version of one run against Kentucky Gov. Andy Beshear (D) last year by the organization.

The ad claims that the Equality Act will “destroy girls’ sports,” showing footage of a cisgender boy beating girls at a race. Christian conservatives have made transgender girls the focus of their opposition to the Equality Act, which does not address school sports.

Terry Schilling of APP told Politico last month that he believes that fearmongering transgender girls is a good strategy to elect Donald Trump because the issues that more people are currently talking about – racism, coronavirus, and unemployment – don’t help Trump as much.

“What I’m hoping is that once we release these ads and numbers start to move, the Trump campaign will see it’s a powerful issue that the Republican Party can use to its success,” Schilling said.

“The ads blatantly lie about what the Equality Act does and misrepresent the transgender community,” said HRC President Alphonso David in a statement. “Facebook and all social media platforms must take down these deceitful ads or label them for the misinformation they are. The Human Rights Campaign has already contacted Twitter to remove the tweet that contains the ads, and is reaching out to additional social media platforms with the same message.”

“APP wants a future where LGBTQ people can be fired, denied housing, refused business services or health care solely because of who they are. But they know full well that they’re on the wrong side of this issue and the wrong side of our future.”

Who’s your LGBTQ Hometown Hero of the Year?

Pro-LGBTQ church breaks away from the United Methodist Church