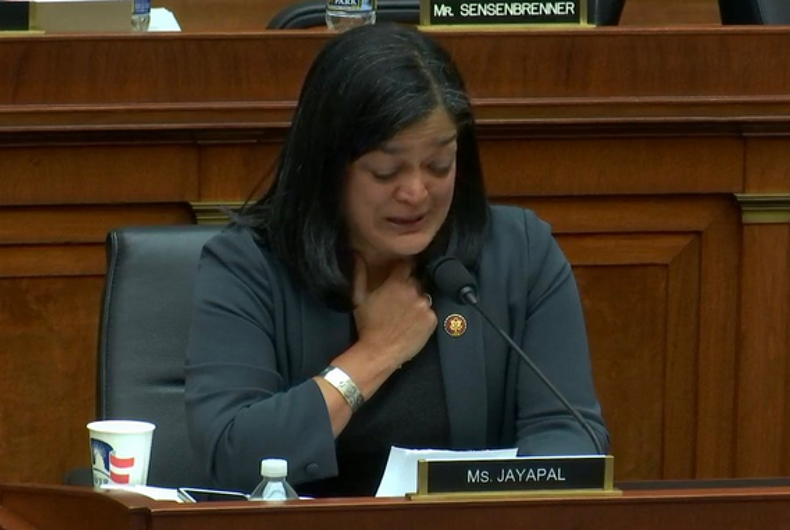 The House Judiciary Committee held the first hearing ever on the Equality Act, and the Republican strategy against the bill was to focus on transgender people in sports while ignoring the vast majority of the bill.

The Equality Act would add sexual orientation and gender identity to the Civil Rights Act of 1964, banning discrimination against LGBTQ people in employment, housing, public accommodations, and several other areas.

Representative Jerrold Nadler (D-NY), who is also the chair of the committee, called the hearing.

“Nearly 50 years after the Stonewall Uprising, there is still no federal law that explicitly prohibits millions of lesbian, gay, bisexual, or transgender Americans from being denied medical care, fired from their jobs, or thrown out of their homes simply because of who they are,” Nadler said in his opening remarks.

“It is time Congress changes that.”

Most of the witnesses supported the Equality Act.

“Having gone through what I went through in the segregated South has sensitized me towards discrimination against anybody,” said Dennis Wiley, pastor of the Covenant Baptist United Church of Christ.

Jami Contreras testified about her personal experience with discrimination. Last year, a doctor refused to treat Contreras’s daughter because her mothers are lesbians.

Of the eight witnesses, only two spoke against the Equality Act.

Julia Beck, a lesbian Trans-Exclusionary Radical Feminist (TERF) who has spoken at the far-right Heritage Foundation and on Fox News’s Tucker Carlson Tonight, said that she opposes including gender identity in the Equality Act.

Beck thanked the Republicans on the committee for inviting her to the hearing.

Duke Law School professor Doriane Lambelet Coleman said that she was only concerned with transgender women crowding cisgender women out of sports.

Several of the Republican representatives who asked questions and commented on the Equality Act also focused entirely on the myth that transgender women are really just men who want access to the privileges of womanhood.

Both representatives Steve Chabot (R-OH) and Doug Collins (R-GA) brought up “rapid onset gender dysphoria” and a discredited survey of parents of transgender children by Lisa Littman that the Republicans said showed that transgender people lie about their gender identities.

Representative Louie Gohmert (R-TX), who has compared gay people to Nazis on the House floor, implied that his Democratic colleagues were naive to believe transgender people are honest about their gender identities.

Representative Matt Gaetz (R-FL) said that he is against LGBTQ discrimination, but he’s just worried about “bad actors” taking advantage of programs set up for women – and he’s concerned what would happen if Trump declared himself the first “female president.”

“Consider this possibility — if President Trump were to say, I am now the first female president? Who would celebrate that?” Gaetz said. “Would those who support the legislation think that’s a good thing, or would they be dismayed? Bad actors have already weaponized some ostensible equality laws for their own benefit.”

Rep. Matt Gaetz, during a hearing on transgender rights, wonders what would happen if Trump were to declare himself the first female president. pic.twitter.com/uYFheZVjUN

Representative Hakeem Jeffries (D-NY) noted that it was odd that the Republicans were so concerned about unfairness toward cisgender women when they have been voting against legislation for women for years, including the Violence Against Women Act and the Paycheck Fairness Act.

“My beautiful, now-22 year old child told me last year that they were gender non-conforming. And over the last year, I have come to understand from a deeply personal mother’s perspective,” she said.

“Since this deeply impactful moment last year, my child’s embracing of their non-conforming gender identity and all it allows in their brilliance, their self-expression, the only thought I wake up with every day is, ‘My child is free. My child is free to be who they are.’ And in that freedom comes a responsibility for us as legislators to protect that freedom to be who they area.”

During @HouseJudiciary today, I shared why the #EqualityAct is so personal to me and my family. My child is finally free to be who they are. With that freedom comes a responsibility, for us as legislators, to legislate with love and not fear. pic.twitter.com/VfpiD9aDyY

Carter Brown, who was fired from his job because he is trans, testified at a Congressional hearing on the importance of passing the #EqualityAct as a means of survival for #LGBTQ Americans. #HR5 pic.twitter.com/cBamRMWWMJ