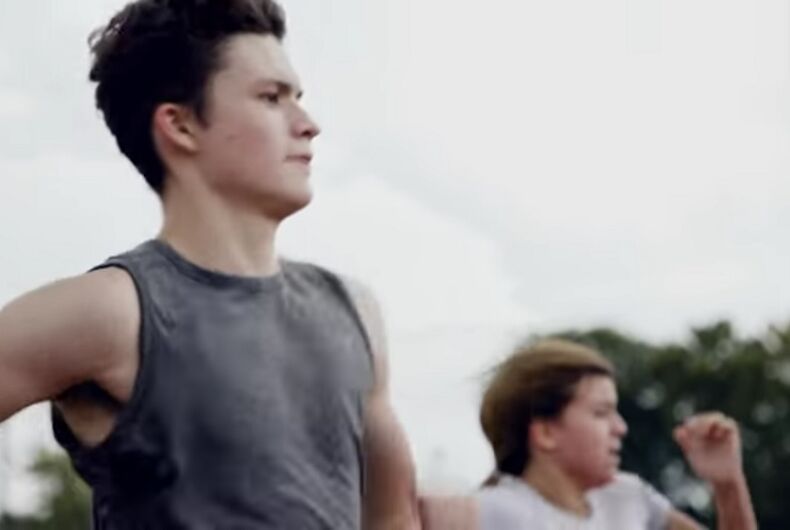 Conservatives in Kentucky are now aiming to take down the Democratic nominee for governor, Andy Beshear, this time focusing on his support of transgender people.

Beshear, the commonwealth’s current attorney general, was the villain of an ad produced by the anti-choice PAC Campaign for American Principles (CAP), which shares ideological beliefs with his opponent, incumbent Governor Matt Bevin (R).

The commercial claims that cisgender girls in Kentucky don’t have equal opportunity to compete in sports because of the “threat” of inclusion of transgender girls.

“What if that shot [at a scholarship] was taken away by a competitor who claims they’re a girl but was born a boy?” the voiceover says as the video shows a cisgender boy passing a cisgender girl in a race.

Toward the end of the ad, the narrator claims that Beshear’s support of these policies “destroy girls’ sports” and are “too extreme for Kentucky.”

CAP reportedly spent $250,000 for this weirdly-worded critique of the Democrat’s record on equal rights. Chris Hartman, executive director of the Kentucky Fairness Campaign, said, “Ads like this… have no grounding in reality, are the types of things that ruin our elections.”

CAP spokesperson Paul Dupont said that the ad is based on Beshear’s dedication to fighting for equality, which also includes LGBTQ people. Dupont pointed to a Facebook statement by the Democratic candidate in support of the Kentuckiana Pride Foundation, where he vows to stand for equality, arguing it’s a clear show of support for the Equality Act, federal legislation bill that would make many forms of discrimination against LGBTQ individuals illegal.

Beshear has not spoken publicly on the Equality Act.

While the ad implies that boys will join girls’ sports teams just to win, there are no known instances that happening anywhere in the country, according to the National Women’s Law Center.

The ad directs viewers to ExtremeAndyBeshear.com where they paint the attorney general as an “unfair” person for actions such as not joining state conservatives in suing the Obama Administration over their guidelines allowing trans- and gender non-conforming people to use public facilities that match their identities.

“This is a shameful and false attack from a shady group that will lead to bullying of our kids. Andy opposes discrimination,” said Beshear spokesperson Sam Newton of the latest ad.

Bevin has frequently sparred with Beshear on both education and LGBTQ issues since both took office in 2015. Governor Bevin has been an outspoken supporter of Kim Davis, the county clerk who refused to give a marriage license to a same-sex couple, and the following year claimed that gender neutral bathrooms were “unnecessary and silly.”

Just in time for Trump’s impeachment, Lynda Carter may return as Wonder Woman