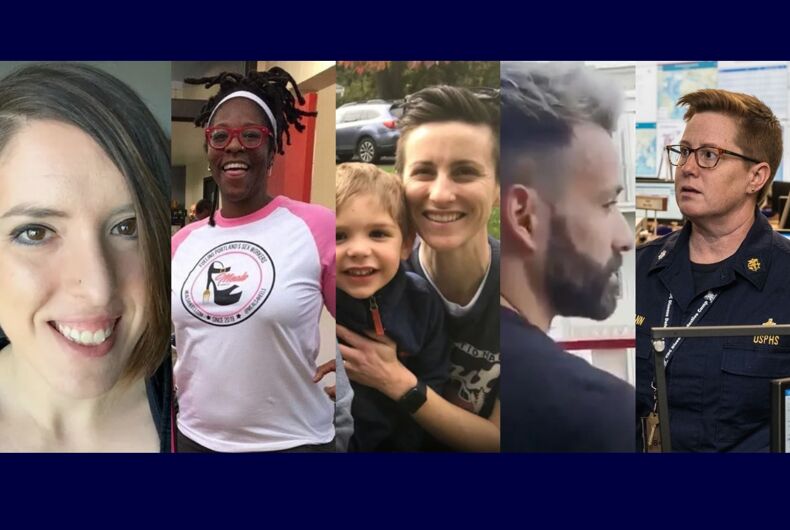 The LGBTQ Nation Hometown Hero of the Year award honors the person who inspired the nation by making a difference in their local community.

This person knows that no action is too small and rolls their sleeves up to create change in their communities, whether that’s a neighborhood or a metropolitan city. They know that standing alone is hard, but sometimes necessary, and they have found success in bringing light and positivity to the LGBTQ community.

The nominees for 2020 Hometown Hero of the Year 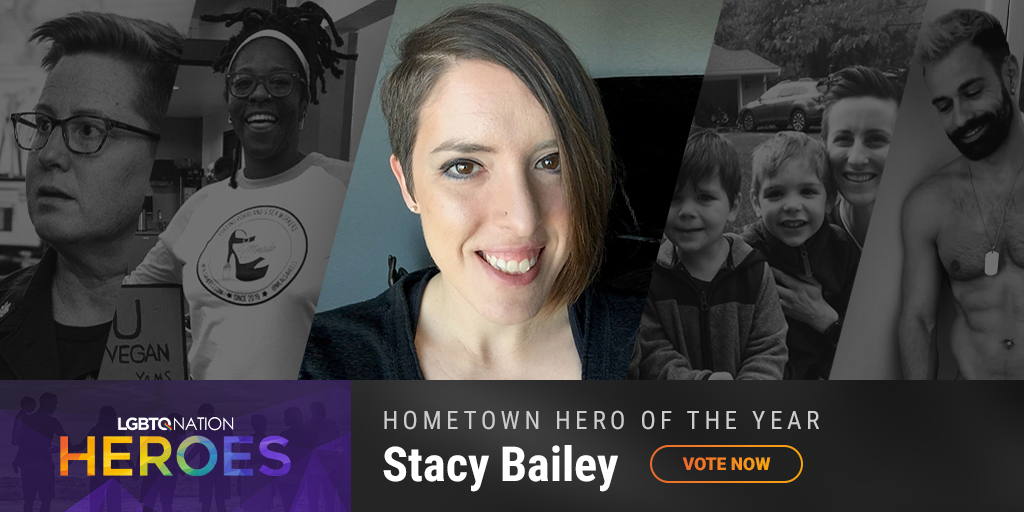 After Stacy Bailey was suspended from her job as an elementary school teacher because she came out to students, she not only successfully sued for discrimination, she donated $10,000 from the judgment to charity and decided to stay a teacher in the district to make a difference.

After 10 years at Charlotte Anderson Elementary, Bailey was dismissed for showing her students pictures of her and her fiancée dressed as Finding Nemo characters. The Mansfield School District claimed they had the right to remove her under the pretense of Bailey having “ongoing discussions” with her students “about her own sexual orientation.”

The district ended up settling for $100,000 and removed the suspension from her permanent record.

At a press conference following the lawsuit, she made a powerful statement highlighting the politicization of LGBTQ families: “When a straight teacher happily announces that she and her husband are expecting a baby to her elementary class, is she saying something inappropriate? Is she announcing her sexual orientation?… Of course not. She’s simply sharing facts about her life.”

Her attorney, Jason Smith, also announced a donation of $10,000 to the Human Rights Campaign. 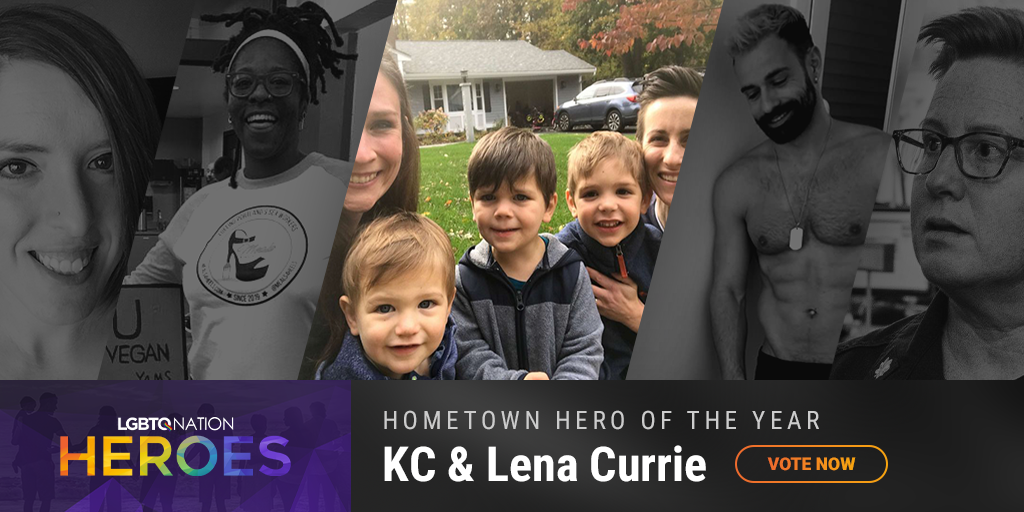 KC and Lena Currie adopted their son Joey in 2018, before learning that he had two younger biological brothers. The couple not only welcomed them into their home too, they formally adopted Logan and Noah this year.

The Sudbury, Massachusetts couple became foster parents to Joey at 18 months old through Children’s Friend, a Seven Hills Organization affiliate. They began fostering him in March 2017, and soon after were informed that Noah, six-weeks-old at the time, was also in need of a home. A month later, they learned that another child – Logan, born in between Noah and Joey – was in foster care as well.

The Curries bought both into their home, and finalized their adoption on National Adoption Day 2019, making them a family of five (with three kids under the age of four!) under one roof. 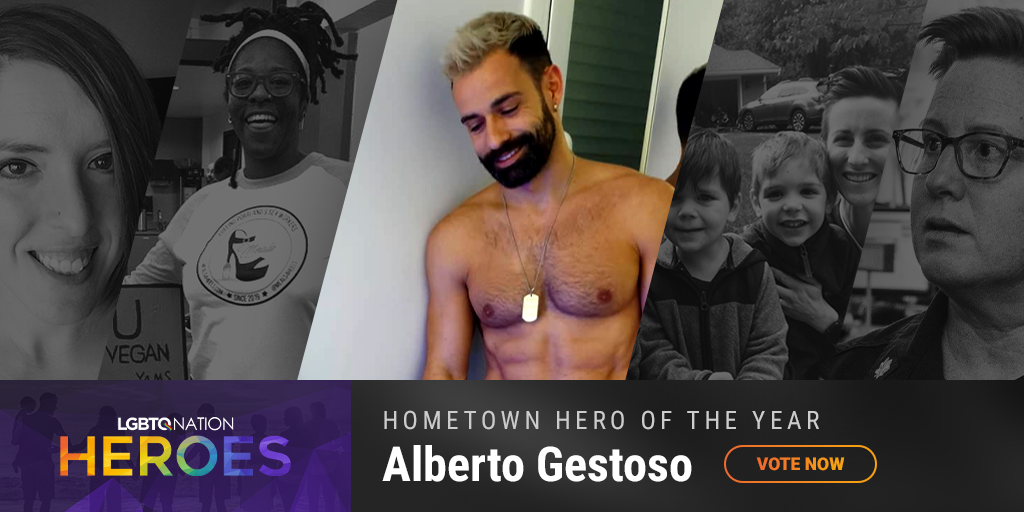 Pianist Alberto Gestoso began playing “My Heart Will Go On” from his balcony in Barcelona during the coronavirus lockdown. His neighbor, saxophonist Alexander Torrent, joined in from his own balcony in a performance that helped many around the world cope with the pandemic.

The impromptu rendition of the Titanic anthem from the streets of Barcelona received eight million views on Twitter alone since March. Gestoso’s partner, Ramon Santana, caught the entire thing from their apartment while someone also recorded from Torrent’s home.

Gestoso and Santana are now international Instagram sensations, combining for over 250,000 followers. 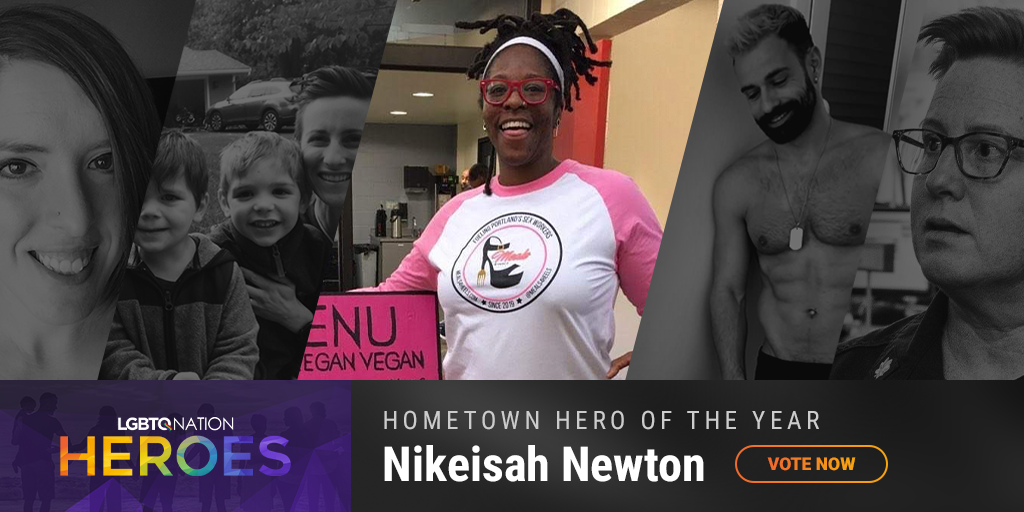 It all started when Newton threw a dinner party and wrapped a plate for a friend to take to work. She started offering plates for sale over Instagram, and now takes orders on-demand via Twitter, call or text message as well. Meals 4 Heels even has a standard menu offering vegan and vegetarian options, and gift cards too.

Newton has lived in Portland, which has more strip clubs per capita than the rest of the country, for over 10 years. “It really has been 100% positive feedback,” she told LGBTQ Nation, “I hope it puts a positive spin on sex work and empowered women…and that I can be a positive black, gay role model.”

Newton hopes to create branches of Meals 4 Heels operated by sex workers and turn 10 percent of earnings into aid for marginalized people. 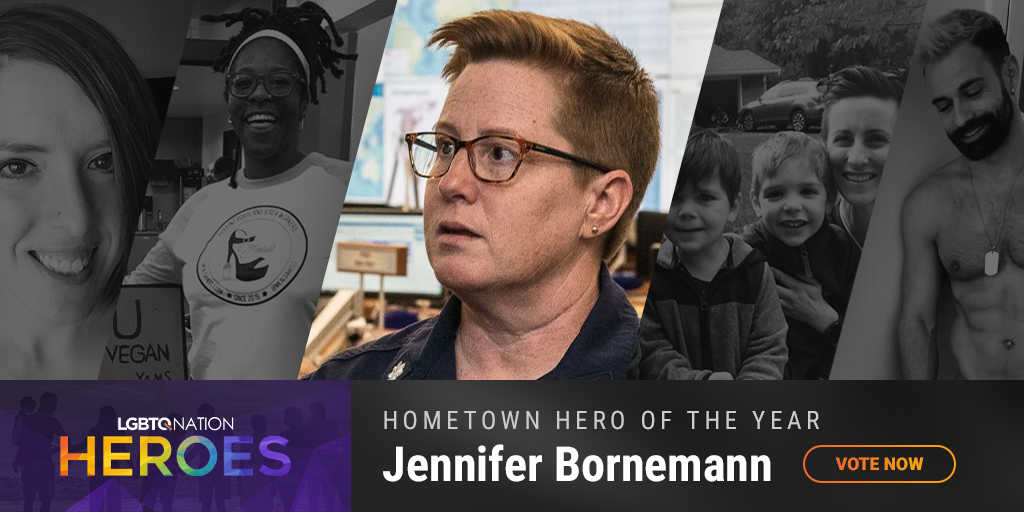 Jennifer Bornemann became America’s “reassuring lesbian” when a photo of her working at the CDC’s Emergency Operations Center was posted to Twitter, sparking hope in the agency’s competence in responding to the coronavirus.

Officially, Bornemann is a Commander in the U.S. Public Health Service and has worked as a Training & Team Lead in the CDC since 2016, following work in the responses to Hurricane Sandy and Washington Navy Yard shooting in 2012 and 2013, respectively.

Her mere presence in the Atlanta offices of the medical bureau in March that (at the time) was charged with trying to contain the spread of COVID-19 caused a sensation across the internet.

“[F]irst relief I’ve felt on the US COVID-19 response,” information professional Taber Bain wrote on Twitter, “there is at least one lesbian with a keychain neck lanyard that jangles when she walks on the job.”

Bornemann replied to the series of tweets regarding her, “Proudly fighting the good fight with my lanyard. #WashYourHands”. She is a licensed social worker and graduate of the University of Maryland and Columbia University.

Outside of work, she is an avid marathoner – receiving the 2011 Blazeman Spirit Award from the Blazeman Foundation for ALS and a three-time competitor in the Ironman triathlon. She is also a twin.