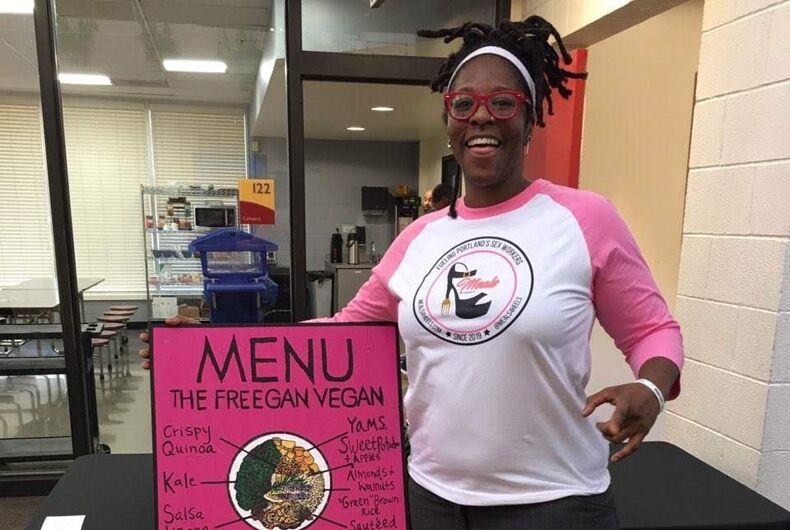 One winter night in 2019, Nikeisah Newton threw a dinner party for some friends. When one guest had to leave for her job at a strip club, Newton gave her a meal to go.

“[My friend] got a really positive and huge response when she was at work and ate her meal,” Newton says. “She said her coworkers would pay for that if someone brought them a healthy, delicious, affordable meal.”

Orders are taken through Instagram and Twitter direct messages, as well as by text and phone calls for those who do not use social media.

Newton cooks all of the food on her own in a commercial kitchen near her house. Meals are vegetarian and can be made vegan, and/or gluten-free upon request. Every meal costs fifteen dollars, including the delivery fee.

“It’s pretty much a simple equation,” says Newton. “Portland is known for its food scene and also known for its strip club scene.”

While data is a bit difficult to come by, it is generally believed that Portland has the most strip clubs per capita of anywhere in the United States.

Newton had lived in Portland for over a decade before she started Meals 4 Heels, and during that time she had many friendships and relationships with people in the sex work industry. As such, she knew of the lack of good food options available to the city’s many sex workers.

“Strip clubs don’t have anything that caters to the people that work there,” she told LGBTQ Nation. “It’s all catered to the clientele. It’s not healthy or delicious.”

When Newton launched Meals 4 Heels, she didn’t have any experience running her own business. Determined to learn the ropes, she sought guidance through an entrepreneurship training nonprofit called MESO. Every week, she meets with a MESO business advisor who helps her with anything she needs.

“The biggest challenge has been just knowing how to run a business,” she says, “As well as trying to make the right choice for my business and just being out in public like this doing interviews, being in front of the camera…I try not to read the comments.”

Nevertheless, Newton says she really hasn’t faced much negativity, despite the stigma that can surround the sex worker community.

“It really has been 100% positive feedback,” she says. “When I walked into MESO, I thought they would cringe or be taken aback, but they never told me to change the name or anything. No negative feedback.”

Newton is so happy that people are excited about Meals 4 Heels.

“I hope it puts a positive spin on sex work and empowered women,” she says. “And that I can be a positive black, gay role model.”

She hopes for a future in which Meals 4 Heels exists in cities around the country. She has heard from sex workers across the United States, from Minneapolis to Seattle to Las Vegas, who are interested in bringing it to their cities.

Even more, Newton hopes to turn any new Meals 4 Heels branches she opens into co-ops that are owned and run by the sex workers, themselves. “When you’re more invested, you’re part of something, you care about it more,” she says.

She also wants to earn more so she can give more back.

“The goal would be to have 10% of revenue go back into marginalized groups and communities I care about or am part of,” she says.

In the end, Newton is proud that she brought to fruition something she really believes in, and she hopes her story encourages others to do the same.

“No matter if it’s running a business, if this is what you believe in, what you enjoy, take that step. That’s seriously the hardest part, but do it, do it, do it. It was the best decision I’ve made in my life.”