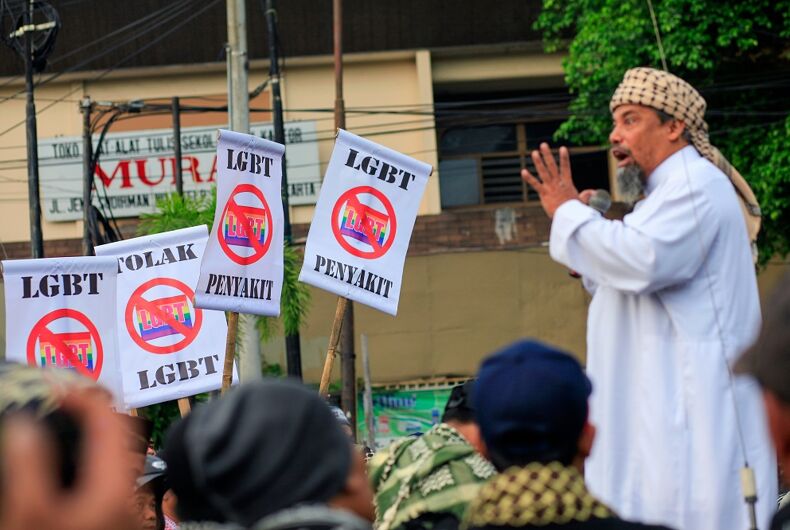 A 2016 protest in Yogyakarta, Indonesia against the existance of LGBTQ people.Photo: Shutterstock

Police in Indonesia detained 56 people in a raid of a gay party this past weekend.

Yusri Yunus, a spokesperson for Jakarta police, said that 47 people who were arrested at the hotel party this past Saturday night have been released without charges, while nine people suspected of organizing the party will face charges under an anti-pornography law.

Related: Gay men caned dozens of times in front of a cheering crowd in Indonesia

Yunus said that the men are believed to have come from the same community in Jakarta and are around 20-years-old. Police are investigating if other people were involved in the party.

The police also tested the nine men facing charges for HIV and found that one of them had the virus. His name has not been made public.

Police said that they found condoms at the party and they are using them as evidence against the organizers.

According to one local media source, the party had a cover fee of between $10 and $20 and said in promotional materials that drugs and weapons were banned. The ad told people to wear red and white in honor of Indonesia’s Independence Day, which was on August 17.

Homosexuality is technically legal in most of Indonesia; it’s only banned in the Aceh province and Jakarta is on the island of Java. The nine men facing charges could get a fine and up to 15 years in prison on the pornography charges.

“I hope there are no followers in West Java, no gay or LGBT lifestyle or tradition,” said West Java police chief Anton Charliyan about an earlier gay raid.

“If there’s anyone following it, they will face the law and heavy social sanctions. They will not be accepted in society.”

The raid is just the latest Indonesia’s continued crackdown on its LGBTQ community, which has worsened in the past few years. After publicly humiliating 141 men arrested in a gay sauna in 2017, the government banned all LGBTQ TV content, the country tried to shut down an international LGBTQ sporting event, and one region arrested 12 transgender women and shaved their heads to “make them men.”

An Indonesian mayor recently called for increased raids against LGBTQ people. In one province, gay and trans prisoners face 100 lashes as punishment for being themselves.

A 2018 Human Rights Watch report said that homophobia is fueling an explosion in HIV transmission in Indonesia.

The United Nations Human Rights Council has called on Indonesia to release people detained for their sexual orientation.

Trump wants to let homeless shelters kick out trans people. Here’s how to fight back.

Who’s your LGBTQ Hometown Hero of the Year?