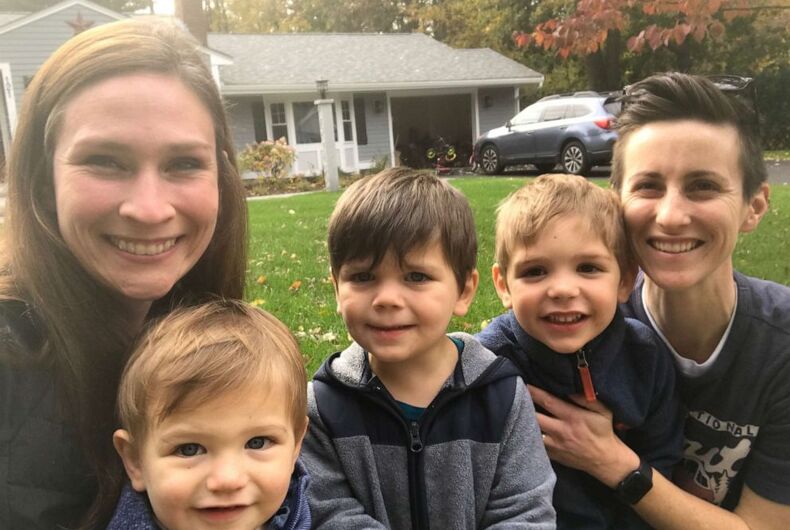 Two women adopted a child, and when they found out that his brothers needed a family too, they adopted all three kids to keep them together.

KC and Lena Currie of Sudbury, Massachusetts met Joey through a nonprofit organization in 2017.

“We saw a picture of Joey and Children’s Friend mentioned [it] would be a good match,” Lena told Good Morning America. “He was 18 months old at the time.”

In early 2018, after fostering Joey, the Curries adopted him. He’s now three-years-old.

The organization then called them and said that Joey had a six-week-old brother Noah who needed a family.

They then found out about the boys’ biological brother Logan, who was older than Noah and younger than Joey. He was living with another foster family at the time that wanted to adopt him, but the adoption fell through.

“It was our gut-feeling,” KC said, explaining why it was important to her to keep the boys together. “We were going to end up saying yes because keeping the brothers together was really important to us. When they’re older and have questions, they’ll have each other to lean on and experience that ride together.”

After fostering the two younger boys for several months, KC and Lena made their family official by adopting them on November 23… National Adoption Day.

The new moms are looking forward to their first holiday together.

“Now we can start dreaming about grade school, sports and all those fun things,” KC said.

A gay 12-year-old died by suicide after relentless bullying. His mom says the school did nothing.