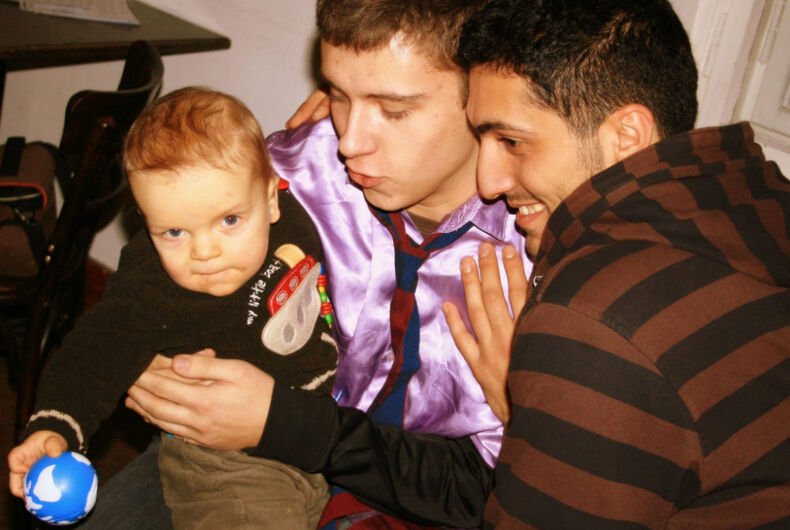 Two weeks ago, Republicans on the House Appropriations Committee attached the Aderholt Amendment to a budget measure. The amendment would prevent state and local governments from banning discrimination at adoption agencies if the agencies are just acting on their “sincerely held religious beliefs or convictions.” It would also bar the federal government from refusing to send funds to agencies that discriminate.

The measure is still in committee in the House, but 40 Senate Democrats have already signed a letter to the Senate Appropriations Committee to reject putting the same language in the Senate version of the bill.

“We strongly oppose the inclusion of such language in the Senate bill or the final appropriations law,” the letter said, calling the Aderholt Amendment “taxpayer-funded discrimination.”

The letter could be key to blocking the passage of the Aderholt Amendment. Budgets are already difficult to pass in Congress – an unpopular measure that makes the budget even more difficult to pass might not seem worth it to Congressional Republicans.

Moreover, the 40 senators could be 41, if Senator Patrick Leahy (D-VT), a longtime supporter of LGBTQ equality, were counted among them. He did not sign the letter since he is the Vice Chairman of the Senate Appropriations Committee and the letter is addressed to him.

And 41 senators is enough to filibuster the measure if it gets to the Senate floor.

“We are heartened by the growing opposition to this measure,” said Julie Kruse of the Family Equality Council. “A broad coalition of child welfare, LGBTQ, and faith organizations will continue to remain vigilant to ensure this discriminatory measure is not included in any final bill that makes it to the President’s desk.”

While the senators wrote that discrimination is “never acceptable,” they wrote that it’s worse because of a recent spike of kids in foster care because of the opioid epidemic. “Children across the country are sleeping in hotels, assessment centers, and temporary shelters due to the lack of licensed foster parents.”

The Democratic Senators also addressed homelessness among LGBTQ youth. “HHS-funded research has shown that LGBTQ youth are more likely to experience longer roads to permanency with higher numbers of failed foster care placements,” the letter said, referring to “conflict and discrimination” that LGBTQ youth face in the foster system.

The letter also expressed concern for “LGBTQ kin” – LGBTQ people who could be barred from adopting their relatives because of discrimination.

City forced to pay antigay preacher $127,000 for not letting him harass LGBTQ people