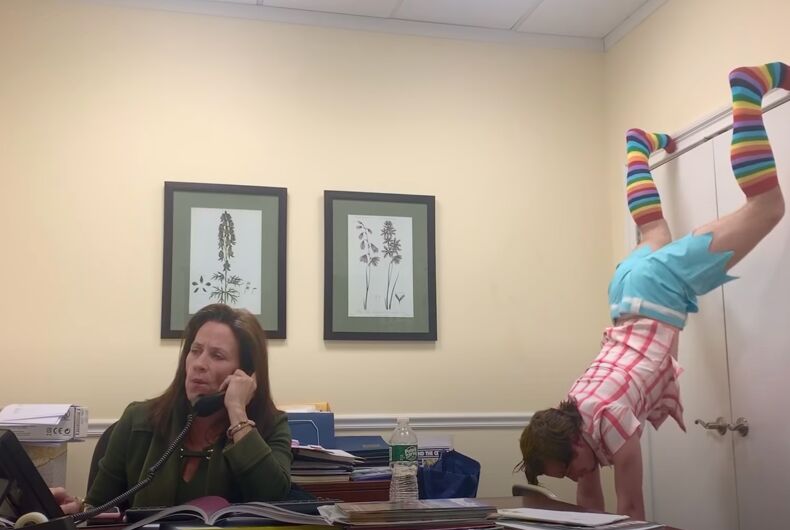 It takes a special kind of parent to raise a gay son. Carol O’Leary should know. Her son, Colin, went viral two years ago after LGBTQ Nation published a video of him performing showtunes in the passenger seat of mom’s car. Carol’s nonplussed reactions to his antics won the hearts of the internet.

But what’s it been like under lockdown? The whole world is a stage for our Broadway-bound young hero — but has Carol kept her cool?

Colin shot his latest video over the course of three months and admits his mom isn’t the biggest fan of his productions – or her involvement. Still, he says, she’s a good sport about it.

“When I do shoots with her, I’m only allowed one shot,” he admits. “It works so well because it’s so real and so her. These videos are our literal relationship.”

O’Leary says his coming out wasn’t a big deal. His family was completely accepting – and also make a few guest appearances in his video.

“I was cast as Dr. Frank N. Furter at 14 years old. Ever since then, we all knew and we just talked about it,” he says.

“She doesn’t care that I’m gay and doesn’t really care what I create, but she’s never knocked it down or told me no,” he says. “She’s so used to the costumes, backdrops, and glitter.”

“She was the one buying me dolls, the fabric, and materials. She saw was the first one to see my creative spark.”

Carol, however, has seen it all and continues to show up every day on set.

“I’ll just tell you a little story,” Colin starts. “So I’m in my my basement. Full Marie Antionette drag. And my mom is two floors up just hearing the same sections of “Vogue” over and over and over again while she is trying to sleep…”

Mike Pence sanctified President Trump. Now his own political career is as good as dead.

If Trump was in Fiddler on the Roof his song would “Sedition!”