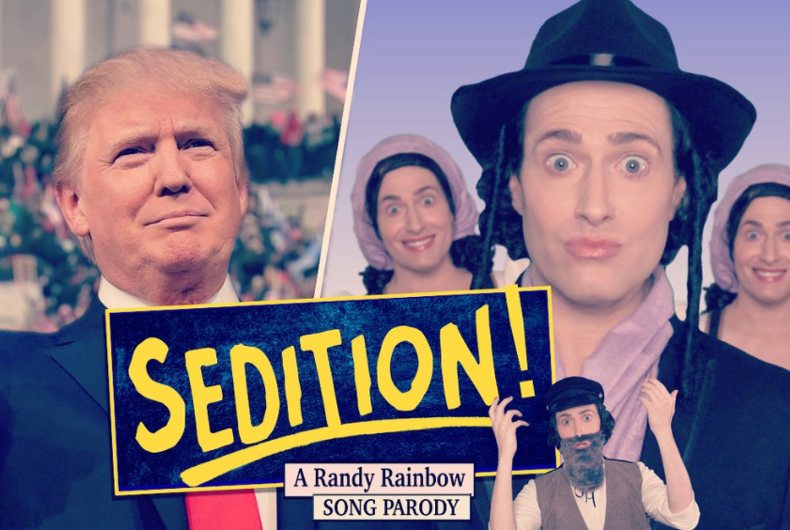 All, combined with “a twiddler” (or “Twitler”?) “with no proof,” leads to one conclusion: Sedition. At least, according to satirist Randy Rainbow’s latest video, which wastes no time slamming Donald Trump for inciting his mob that sieged the U.S. Capitol in an attempt to overturn the election and keep him in power.

The Emmy-nominated, Queerties-winning YouTuber had to break his own rule of not repeating concepts or songs he’s already played off of.

Rainbow had previously parodied “Tradition,” a song from the musical Fiddler on the Roof. He remade the tune as “Distraction” to slam Trump’s lack of management over the COVID-19 pandemic response.

But this time, the song is bought back, in part because Trump continues to mess things up spectacularly, but also because “you people won’t f*cking stop DM-ing me to request it, so here we are,” Rainbow says.

(If you needed a refresher, here’s the definition of sedition: “Organized incitement of rebellion or civil disorder against authority or the state, usually by speech or writing.” So basically, the speeches and tweets Trump delivered prior and during the Capitol attack.)

Rainbow’s fans are already asking for more. “This should become a trilogy,” the video’s top YouTube comment reads. “Next up: Conviction. CONVICTION!!”

One thing’s for sure, if Trump does see this one, he won’t be able to tweet about it.

Besides, as Rainbow asks, “shouldn’t he be packing his sh*t?”

What is the United States of America now?