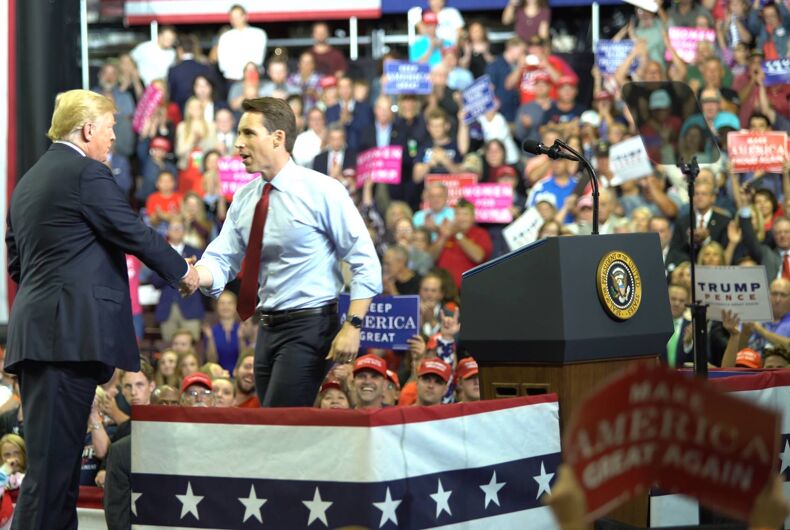 Republicans in the Senate will now have to go through the humiliating spectacle of either accepting reality or declaring their loyalty to Donald Trump, thanks to Senator Josh Hawley. Hawley, who styles himself as a populist, has announced that he will challenge the certification of the electoral votes from Pennsylvania and possibly other states when the Senate convenes to ratify the election results Jan. 6.

“Millions of Americans concerned about election integrity deserve to be heard,” Hawley tweeted, despite reviews by multiple courts and even fellow Republicans that concluded the president’s fraud claims are lies. Millions of Americans may also believe the world is flat, but that doesn’t mean the Senate should indulge their fantasies.

Related: America’s first gay president is no longer the worst one according to historians

Hawley’s grandstanding puts other Republican senators in a tough spot. Instead of the body just formalizing the results, each senator will now have to affirmatively vote on whether some states should have their electors challenged. This is due to the Electoral Count Act of 1887.

That means that senators must now go on record, rejecting an attempt to overturn a free and fair election, or bowing to fears that angering Trump will harm their political futures. Given the GOP’s behavior up until now, that’s a far tougher call than it has any right to be.

Hawley’s support for Trump’s refusal to acknowledge his loss is just one attempt by a member of Congress to reject the will of voters. Rep. Louis Gohmert, who is also one of the most anti-LGBTQ members of Congress, tried to sue Vice President Mike Pence in an attempt to throw out the rules for Congress to certify the election results.

That lawsuit was thrown out yesterday.

While Gohmert’s attempt to undermine democracy was over before it got started, it also notably invoked the Electoral Count Act of 1887 as justification for vacating the election results at the last minute. The Electoral Count Act codifies Congress’s role in formally certifying the results of the Electoral College. The law was meant to keep drama to a minimum, and until Trump came along, it did just fine.

What caused the law to even come into place was the 1876 presidential election, which, until 2020, was the most contentious in American history. The Democratic candidate, Samuel J. Tilden, was the apparent winner, but Republicans were unwilling to give up power, and lined up behind their candidate, Rutherford B. Hayes.

The results were a parade of dealing and thievery with competing electors from several states. Republicans struck a deal with Democrats: approve Hayes’ electors and we’ll forget about Reconstruction. As a result, Hayes became president, at the incalculable cost to the nascent freedom of Blacks in the South, as an LGBTQ Nation editor explained before.

It became one of five instances so far in America (including 2016) where the popular vote winner did not end up in the White House.

The most pivotal tenets to the informal agreement is that Grant/Hayes would ensure that “troops were to be removed from the South” and states had “the right to deal with black people without northern interference”.

Thus… the end of Reconstruction. The start of everything else.

In one final twist, Tilden may have become the second president (after the first, James Buchanan) to be gay or not heterosexual.

One newspaperman described Tilden as “a very nice, prim, little, withered-up, fidgety old bachelor, about one-hundred and twenty-pounds avoirdupois, who never had a genuine impulse for many nor any affection for woman.” Republicans used Tilden’s status as a bachelor to suggest he “courted men” in a primitive version of gay baiting.

More contemporary reviews of evidence also conclude that Tilden was likely asexual, and may have never engaged in sex in his life.

While the Electoral Count Act was meant to prevent the kind of anti-democratic dealmaking that resulted in Hayes becoming president, the law didn’t take into account ambitious politicians like Hawley, who is willing to undermine one of the tenets of democracy.

Hawley’s stunt, which still stands to go forward, isn’t going to change the final results. The Senate will certify that Joe Biden won the election. The process will also reveal who is committed to our national principles and who, like Hawley, is willing to subvert them for political gain.

Juwan J. Holmes and Bil Browning contributed to the information cited in this article.