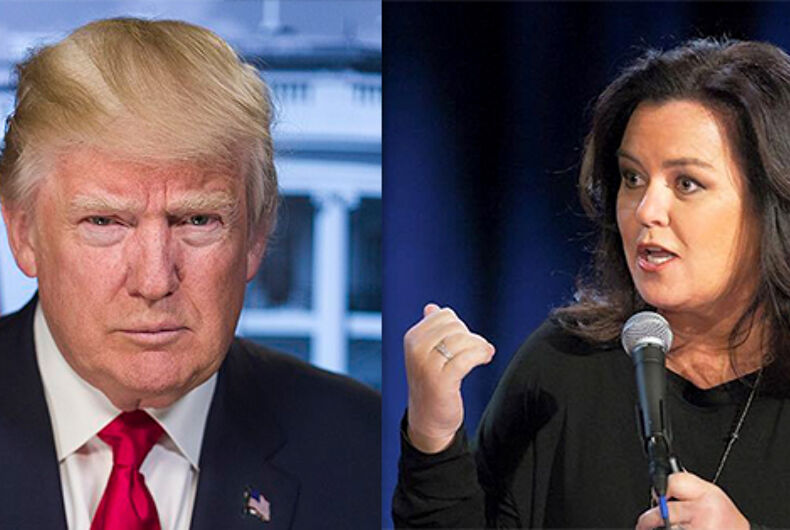 There remains no love lost between Donald Trump and Rosie O’Donnell.

Trump has retweeted O’Donnell’s call for FBI Director James Comey to be fired, from back in December, saying “We finally agree on something Rosie.”

O’Donnell replied, calling Trump “sadistic” and warning that he doesn’t know how much trouble he is in, adding that Comey’s “people believe in him.”

O’Donnell’s original tweet calling on Comey to be fired, which Trump did on Tuesday, was in reply to a Dec. 20 tweet from former Hillary Clinton press secretary ​Brian Fallon.

“The unsealed filings regarding Huma’s emails reveals Comey’s intrusion on the election was as utterly unjustified as we suspected at time,” Fallon wrote.

The Trump administration wants the American public to believe that after the president’s continued embracing of Comey in the wake of the Hillary Clinton emails investigation, they are now unhappy with how it was handled and Comey had to be fired.

Anderson Cooper spoke for much of the nation during his eye roll heavy interview with recently-out-of-hiding White House spokesperson Kellyanne Conway.

Trump’s treatment of O’Donnell came up during the debates, when Megyn Kelly brought up some of the words he had used to describe women, including “fat pigs, dogs, slobs, and disgusting animals.”

“No it wasn’t,” Kelly said. “It was well beyond Rosie O’Donnell.”

O’Donnell said that she went into a deep depression after that debate. She later held an anti-Trump protest near the White House.