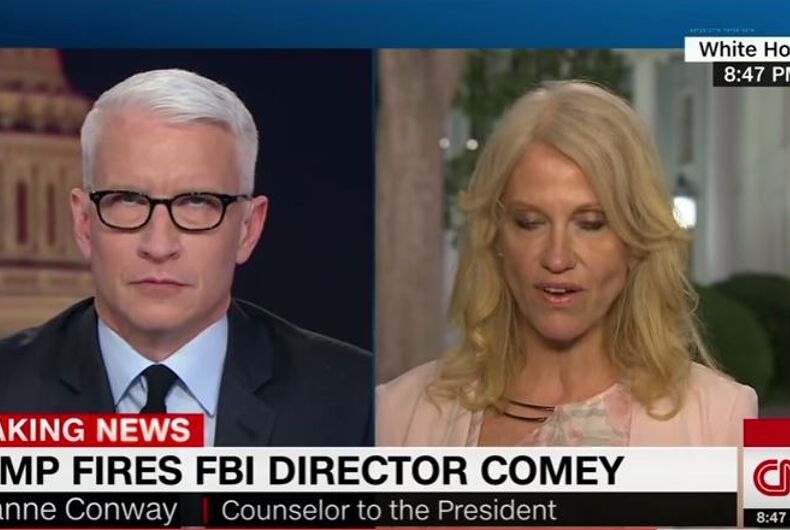 Anderson Cooper is having none of Kellyanne Conway's nonsense. Photo: CNN/YouTube

Kellyanne Conway has come out of hiding to appear on CNN with Anderson Cooper to come to President Trump’s aid over the conveniently timed firing of FBI Director James Comey, meaning basically nobody else volunteered for that unenviable position.

Trump fired Comey on the recommendation of Deputy Attorney General Rod Rosentein and Attorney General Jeff Sessions, who, you may recall, recused himself from investigations into ties between the Trump administration and Russia.

Comey was leading an investigation into those ties, but Trump and his surrogates, like Conway, want us to believe that that had nothing to do with the decision. Instead, they cite his mishandling of the Hillary Clinton emails.

That’s right, the same Trump who encouraged the Russians to hack Clinton’s emails, and who had praised Comey as “brave” over his investigation on the issue.

Cooper grilled Conway, who ducked and dodged in perfect Conway style throughout the interview, telling Cooper he was “looking at the wrong set of facts,” a comment reminiscent of her “alternative facts” statement concerning the inauguration crowd size.

That resulted in another GIF-worthy reaction from Cooper.

The epic eye roll came after Cooper showed video of candidate Trump talking up Comey, which Conway reacted to by bragging about winning the election.

This @andersoncooper eye roll at @KellyannePolls is EVERYTHING. pic.twitter.com/j8usLAzhwh

“As a candidate, Donald Trump praised James Comey,” Cooper told Conway. “Donald Trump talked about this on the campaign all the time. All of sudden the White House is concerned about James Comey’s handling of Hillary Clinton’s email?”

Conway tried to shift attention away from the emails investigation, even though it, as Cooper notes, is a large portion of the memo from Rosenstein recommending Comey’s termination.

Cooper pressed on, questioning why all of a sudden Trump and his administration is showing concern over the handling of the Clinton emails investigation, when candidate Trump had a much different view.

“You’re going back to the campaign,” Conway said. “This man is the president of the United States. He acted decisively today.”

“That makes no sense,” Cooper shot back. “He said one thing as a candidate and now he’s concerned as president?”

“It makes complete sense,” Conway argued. “Because he has lost confidence in the FBI director.”

Conway pointed to Trump saying in his letter that he was told by the FBI director that he was personally not under investigation as proof that there is nothing to see here.

“Yeah, when did he say that?” Cooper asked.

“That’s between the president of the United States and director Comey,” she answered.

“You don’t think it looks odd at all that the president of the United States is firing the guy who’s leading the investigation into the president’s White House and the people around the president?” Cooper asked.

“Well, let me repeat that the president has been told by the FBI director that he’s not under investigation. That’s right in the president’s letter,” she said.

“No, I don’t,” Conway replied. “I know that some are obsessed with the word Russia, Russia.”

“James Comey said that there is an ongoing investigation,” Cooper pointed out.

Conway tried to obfuscate by once again claiming Trump himself is not under investigation, and neither is she.

It is an incredible interview. Watch it in full below.

Cooper is not the only one done with Conway. Chris Cuomo also took Conway to task for her version of the situation, telling her, “You’re creating an image that doesn’t reveal itself in fact.”

.@ChrisCuomo to Kellyanne Conway: “You’re creating an image that does not reveal itself in fact.” https://t.co/8LzwLSoS1s