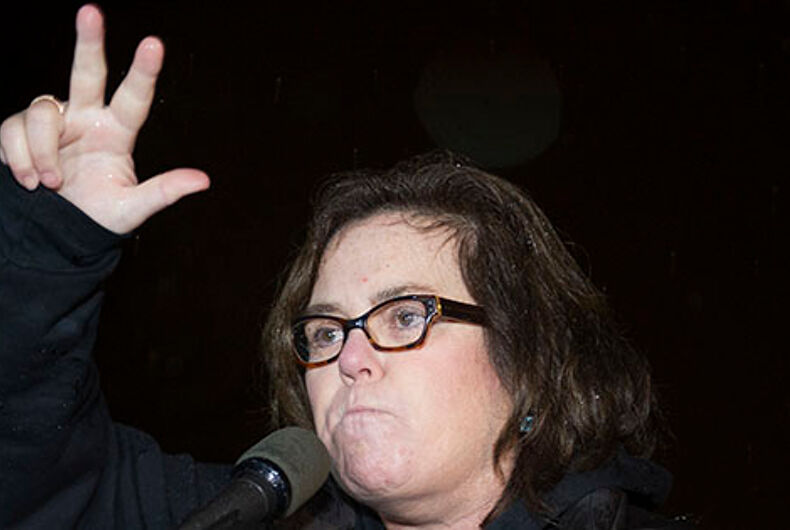 The setting for the latest chapter in the long-burning, bitter feud between Rosie O’Donnell and President Donald Trump was Lafayette Park, steps from the White House, where some 200 demonstrators held a “resistance” rally ahead of his speech to Congress.

“The truth matters,” O’Donnell declared, as rain soaked the assembled protesters, “even if our major media companies will not call him a liar, we will. He lies!”

O’Donnell told reporters after she spoke that Trump is guilty of “treason” because of his reported ties to Russia.

WRC-TV reported the American Civil Liberties Union, MoveOn.org Civic Action, the Hip Hop Caucus and DailyKos were among the groups taking part in the demonstration.

“Look at this crowd of 1.8 million people,” O’Donnell mock-boasted, using what she called “Donald Trump math” for a crowd CBS News estimated at about 200 people. “You say it, the media buys it,” she said.

It was her first public lashing of Trump since having to backtrack on comments she made about the president’s youngest son, Barron. O’Donnell claimed on her website her tweet raising the question whether Barron might be autistic had nothing to do with their feud.

She wrote in that post that Trump “triggers” her and claimed prior to the election that all the fuss he made during the debates about the actress, former View host and comic had caused her severe depression.

So far, the president has not taken the bait and responded to O’Donnell’s taunts on his Twitter account.

Be prepared: LGBTQ people at twice the risk for smoking dangers

Ellen, Lady Gaga & Pharrell team up for ‘The Love Project’ in uplifting video