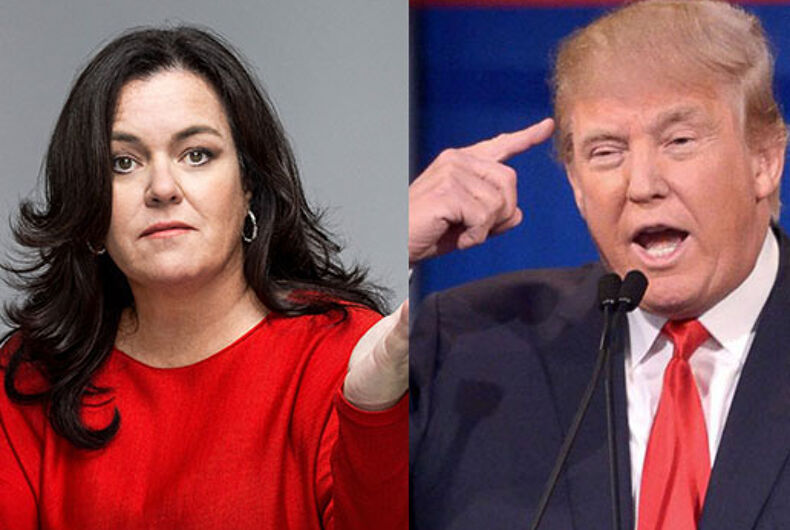 Rosie O’Donnell is no stranger to Donald Trump’s insults. She has been on the receiving end of them for years, but the one that came during the first presidential debate might have hurt the most.

O’Donnell has penned a poem opening up about the depression she experienced in the wake of Trump yet again using her as a punching bag, this time in front of an audience of over 8 million people.

Hillary Clinton highlighted her opponent’s record of demeaning women during the debate, saying, “This is a man who has called women pigs, slobs and dogs. And someone who has said pregnancy is an inconvenience to employers, who has said women don’t deserve equal pay unless they do as good a job as men. And one of the worst things he said was about a woman in a beauty contest. He loves beauty contests, supporting them and hanging around them. And he called this woman ‘Miss Piggy.’ Then he called her ‘Miss Housekeeping,’ because she was Latina. Donald, she has a name. Her name is Alicia Machado.”

“Some of it was said in entertainment,” Trump answered. “Some of it was said to somebody who has been very vicious to me, Rosie O’Donnell. I said very tough things to her and I think everyone would agree that she deserves it and nobody feels sorry for her.”

O’Donnell’s poem, titled “8 million to one,” tells the story of her finding the strength to leave the house only to run into her nemesis’s daughter Ivanka.

it’s hard to walk
to shower
to try
to care…

nodding slowly
yes
she said
it was

dear god
i prayed
guide me
out of here

as her father has
same as my own

O’Donnell also took to Facebook after the debate to voice her disgust with Trump, whom she called the “orange anus.”

When Trump was informed years ago that she suffered from depression he said, “I think I can cure her depression. If she stopped looking in the mirror, I think she’d stop being so depressed.”

Why do Christians always blame LGBT people for natural disasters?