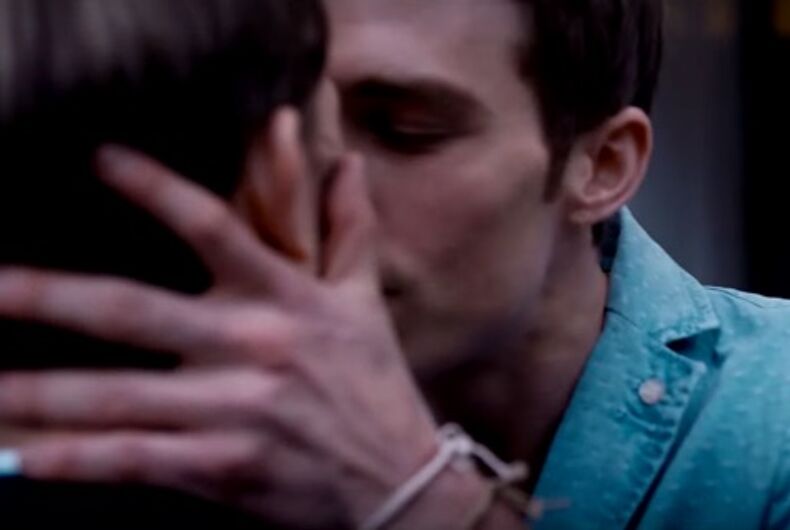 Two male characters kiss in the trailer for the Doctor Who spinoff, Class.Photo: screenshot

Class, the new Doctor Who spinoff coming to the BBC, has released its first trailer and a boy-on-boy smooch is featured prominently.

Set at the Whovian landmark Coal Hill Academy, the new show will feature a gang of students and a mysterious physics teacher solving mysteries and battling aliens without the help of everyone’s favorite doctor. While the current incarnation of the Doctor, played by Peter Capaldi, appears in the trailer and kickoff episode, openly gay writer Patrick Ness says he doesn’t plan on bringing the Doctor back often.

“I think cameo appearances are like penises,” he told the audience at New York Comic Con. “If you put it in the scene it’s all people are going to look at. So you have to have it there for a really, really good reason… I don’t want anything to take away from the story.”

Aimed at a young adult audience, the show takes a decidedly different twist from other Doctor Who spinoffs like Torchwood. Out actor John Barrowman starred in that series as the bisexual Captain Jack Harkness.

“Coal Hill was featured in the very, very first episode of Doctor Who in 1963; his granddaughter went there,” Ness told the audience. “The school has appeared in the show many times over the years. And with all of the activity that’s taken place there, it’s become a little bit of a magnet for things. Our show is about what happens to people when the Doctor is done. He leaves you behind to deal with the rest. When he says, ‘The universe is different for you now,’ what do you do? That’s our show.”

When the spinoff was announced in June, Ness announced that one of the main characters would be gay. After the internet blew up with the news, he took to Twitter to express his surprise it had made such an impact.

“Kind of astounded that having a gay lead on Class has been such big news,” he tweeted. “One day it won’t be, one day soon because it’s not a big deal. One way to change the world is to act as if it’s already changed. That’s how I roll, that’s how Class rolls. Except of course it is a big deal, I know. 15-year-old me never got to see himself; that won’t happen again, not on my watch.”