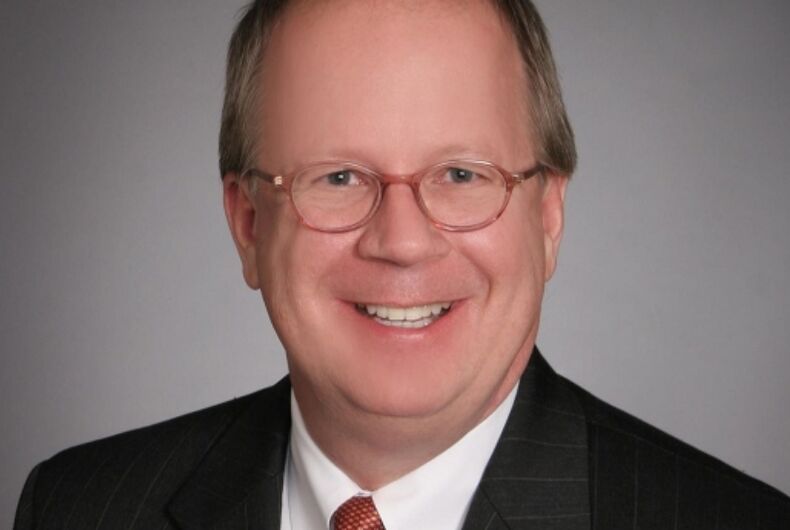 A Texas judge has quit the Republican Party after officiating his first same-sex marriage, deciding he had had enough of its intolerance.

Justice Terry Jennings will now be the only Democrat on the Texas First Court of Appeals after pulling the trigger on the decision he had been mulling over for years, with the encouragement of his children who wondered why he was staying with a party from which he was feeling increasingly alienated.

Jennings said when some mentioned that many Republican judges might not be willing to preside over a same-sex marriage, “that’s when I started thinking, Well maybe I’m not in the right party then.”

“Today’s Republican Party has chosen a dark path I cannot take,” Jennings said at a Democratic fundraising dinner over the weekend, where he officially made the announcement that he was switching parties.

“It’s just a party I didn’t feel comfortable being a member of anymore,” he told the Houston Press. “You’ve heard the common expression a thousand times: I didn’t leave my party; my party left me. And it’s true.”

“My values and principles have not changed since 2000, but those of the Republican party have,” he said at the dinner.

“Over the years, I have watched this great nation, in all its diversity, grow richer and stronger. In 2008, I was excited when we elected our first black president. Too many Republicans were not. As the father of two daughters, and the son of a woman born before the ratification of the 19th Amendment, I am equally excited that we are about to elect our first woman president.  Too many Republicans are not. I appreciate and embrace that we are a nation of immigrants, of individuals of many different faiths and ethnicities — all one people under our Constitution — all of whom are guaranteed equal protection under the law. Too many Republicans do not.

“…As President Reagan’s son, Michael Reagan, recently tweeted, ‘If this is what the Republican party wants, leave us Reagans out.  Nancy would vote for HRC.’ Leave me out, too.  Because today, the Democratic party — and the Democratic party alone  — presents our country with a positive and optimistic vision for the future of all Americans, not just a select few.”

Jennings made a point to say that he was not endorsing or rebuking either presidential candidate, adding that ethically judges cannot make endorsements. But he did make comments at the end of the speech that suggest who he might be voting for in November.

“Secretary Hillary Clinton reminded us that ‘America is great because America is good.’ We really are stronger together,” he said.

Jennings has been elected three times to the First Court of Appeals bench since 2000. He said he does not know if he will seek re-election in 2018.