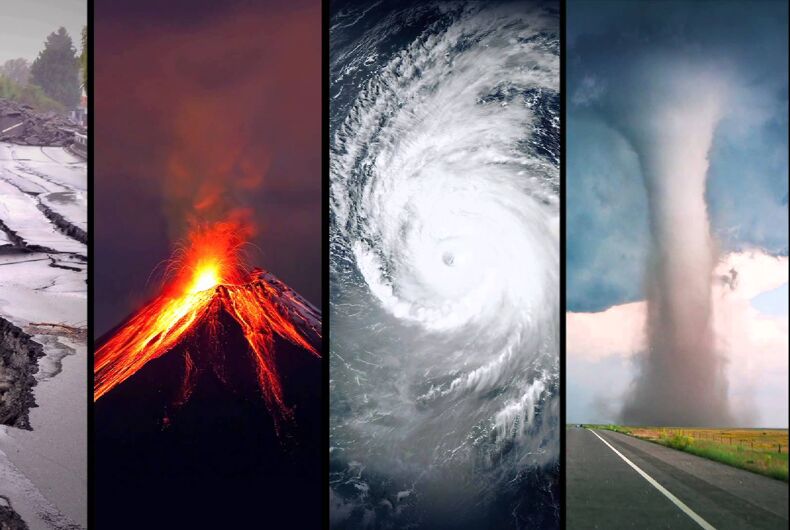 The utter power and strength of the LGBT community allows us to control the course of hurricanes, floods, and droughts, and thus, we get to determine who lives and who dies, who retains their treasured belongings and who gets wiped out and wiped away.

Well, that is if you believe the looney tunes on the theocratic right who hold us responsible for causing many of the greatest natural disasters of modern times.

The latest installment from the loony bin came from a columnist for shoebat.com in an article titled “Hurricane Matthew Is The Wrath Of God Poured Out On the Cities Of Orlando And Savannah For Supporting The Evil Sodomites.” This must be urgent since the initial letter in each word of the title is capitalized! Also, I’m sure they employ the term “sodomites” not only to signify men who have sex with men, but also those perverted women-on-women, bisexuals, and trans people as well.

The author, Andrew Bieszad, argues that the hurricane then-forecast to hit Florida and other points in the U.S. Southeast resulted from God’s wrath directed against upcoming pride festivals (“sodomite pride parades”) in Orlando, and Savannah, Georgia. Bieszad asserts that this particular hurricane has dramatically erupted in “unnatural” ways and “is unexplained by science,” and

“The word ‘Hurricane’ originally comes from the Taino Indians, a people who inhabited the Caribbean and parts of Florida when the Spanish arrived in the 16th century. The original word, ‘Huracan,’ was a god of evil in their pagan religion, and the natives thought that these storms were attacks from this evil diety. Interesting.”

In addition, Bieszad asserts that it is no mere coincidence that this current hurricane holds the name “Matthew.” Saint Matthew is depicted as an angel in the Christian Bible, and angels are “the ones obedient to God [who] always play important roles in executing God’s will, both for aiding man in his struggle for righteousness and punishing him in accordance with God’s will.”

But Bieszad simply pulls from the looney bin scavenged before by so many others.

For example, in May 1978, Anita Bryant, Florida Orange Juice queen and chief organizer of her so-called “Save Our Children” campaign to overturn a gay-rights ordinance of Dade County, called homosexuals “human garbage,” and blamed the drought then overtaking California on their sinful behavior. Ironically, however, just one day following the first openly-gay San Francisco City Supervisor, Harvey Milk’s November 8 election, and six months following Bryant’s claim, it started to rain.

In addition, others blamed the torrential winds, rain, and devastating flooding of Hurricane Katrina in 2005 on LGBT people. Reverend John Hagee, evangelical pastor of a Texas megachurch, was quoted in an interview in 2006 saying that “God caused Hurricane Katrina to wipe out New Orleans because it had a gay pride parade the week before and was filled with sexual sin.”

Televangelist Pat Robertson has most likely talked to God who told him of an upcoming calamity. After Orlando, Florida city officials in 1998 voted to fly rainbow flags high atop city lampposts during Disney World’s annual Gay Days events, Robertson issued a stern warning to the city:

“…I don’t think I’d be waving those flags in God’s face if I were you. … [A] condition like this will bring about the destruction of your nation. It’ll bring about terrorist bombs, it’ll bring earthquakes, tornadoes, and possibly a meteor.”

Following the horrific events of September 11, 2001, Robertson, along with his conspiratorial-theory evangelical buddy, Jerry Falwell, reiterated past warnings. Falwell, with an air of righteousness, proclaimed on Robertson’s The 700 Club on the Christian Broadcasting Network on September 13, 2001:

“I really believe that the pagans, and the abortionists, and the feminists, and the gays and the lesbians who are actively trying to make that an alternative lifestyle, the ACLU, People For the American Way, all of them who have tried to secularize America, I point the finger in their face and say, ‘You helped this happen!’”

To this Robertson responded: “I totally concur.”