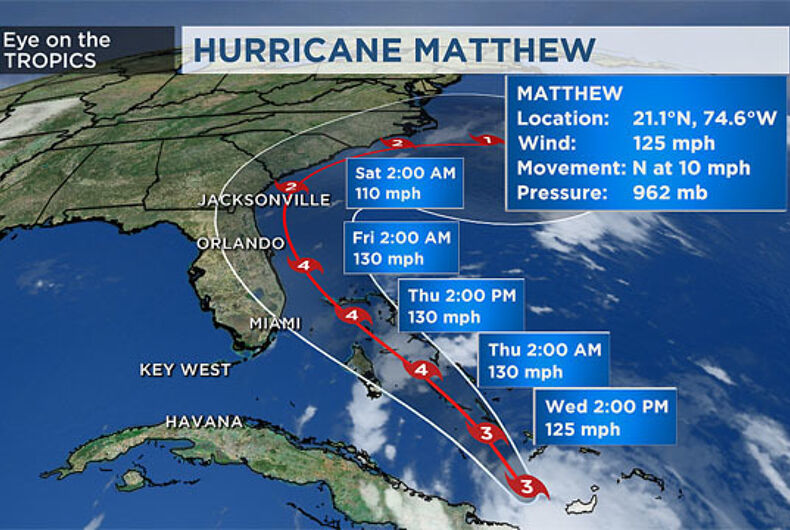 Orlando Pride hasn’t even happened yet, but God is pissed! According to a columnist for the Christian extremist site shoebat.com, approaching Hurricane Matthew is headed to Florida because of this weekend’s pride festival – and then God will turn his eye toward Savannah, Georgia.

In the aptly named article, “”Hurricane Matthew Is The Wrath Of God Poured Out On The Cities Of Orlando And Savannah For Supporting The Evil Sodomites,” Andrew Bieszad manages to tie together the Tiano natives’ name for a pagan god, Huracan, to the Catholic Saint Matthew and then gives it a whole heaping spoonful of homophobia on top.

“While not all bad weather is necessarily a sign of sin, both sacred scripture and sacred tradition clearly note that it can be so,” Bieszad writes. “Now we know that Florida is an area that is infected with sin, especially cities such as Miami and Orlando, which are veritable dens of sodomy. But instead of looking at mere particularities, I thought I would ask a broader question- Is there any “homosexual” activities going on this month in either the Orlando or Savannah areas? Sure enough, I found that both Orlando and Savannah are having massive sodomite pride parades this month, especially in Orlando, which is sponsoring this very weekend as the hurricane is about to hit a massive “coming out” parade sponsored no less than with the major support of the city itself and major corporate backers.”

But wait, the crazy isn’t finished. It only takes a turn to the more outrageously stupid.

Matthew is set to hit Orlando early Friday, October 7th, and this Friday is the Feast day of Our Lady of the Rosary. Originally dedicated by Pope St. Pius V in 1571 following the Catholic victory over the Ottoman Turkish Navy in the Gulf of Lepanto (also known as the Gulf of Preveza) that destroyed the Ottoman Navy and saved Europe from an Islamic land invasion. The Rosary, originally given by Our Lady to St. Dominic, is a meditation on the life, death, and resurrection of Christ and is regarded formally as the second most powerful form of prayer in the Church subordinate only to the Holy Sacrifice of the Mass. It is used to crush sin and heresy in all its forms, and is instrumental in the conversion of the worst sinners and most hopeless cases.

The Ottoman Turks were known to widely practice the rape of young boys, as they were homosexuals. As we have pointed out before, Islam is anything but “homophobic,”- to say other wise is merely propaganda, as a simple reading of Islamic history and theology shows that not is homosexuality just permissible so long as the appropriate conditions are met, but even meritorious. Islam is the perfect religion for a homosexual, as it allows one to immerse his lust for sin however he desires to.

So let’s put this together.

A hurricane- the storms from an evil being- named after the New Testament Evangelist whose symbol is an angel- a messenger of God and and executor of His will among and upon men- is about to make landfall on the exact area where two massive sodomite parades are taking place and almost to the day for the largest one, and the exact day the hurricane is scheduled to hit is the Feast Day of the Holiest Prayer in the Catholic Church used to fight the most wicked of sins and heresies given by the Mother of God herself.

Coincidence? You be the judge.