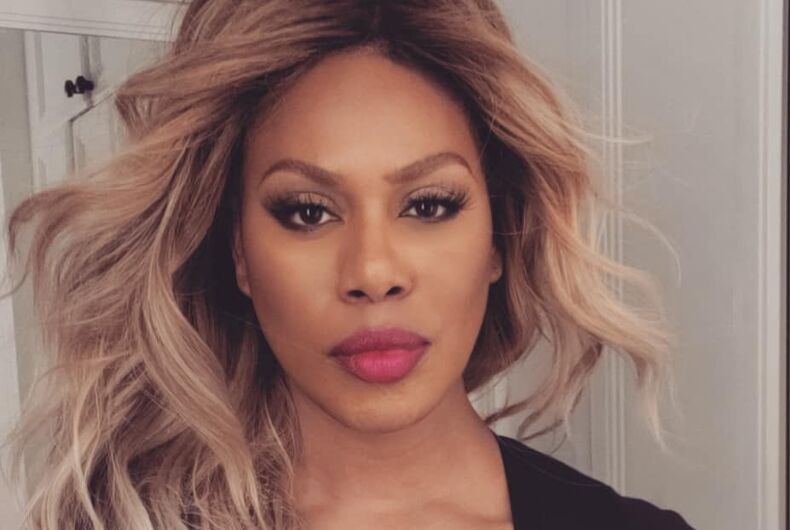 Ever since her 2013 debut as a trans character in Netflix’s women in prison drama Orange is the New Black, Cox has become one of the most visible trans advocates in America. She even appeared on a 2014 Time magazine cover calling trans rights “America’s next civil rights frontier.”

Since then, she has spoken out for queer youth and LGBTQ rights. In 2014, she hosted an MTV and Logo documentary special about trans youth; in 2017, she urged Grammy viewers to learn more about the bathroom lawsuit of trans student Gavin Grimm; and that same year, she made a video about the history of trans rights with the ACLU.

Related: Calling transgender youth by their name dramatically reduces their chance of suicide

And though she has spoken about her life story in the past, her Instagram message shares specifics about the bullying she endured and how it made her feel. Here’s what she wrote:

I want LGBTQI+ youth who may be experiencing violence or bullying to know you are valuable, beautiful and special. When I was bullied and beaten up as a kid within the mostly black community I grew up in (and later by people from other races), it made me feel less-than. I internalized so much shame about what was happening to me. I believed it was my fault — I believed I was inherently a bad person because I was too feminine.

I want you to know your gayness or your transness, your gender nonconformity, you intersex status are all beautiful. I want you to know the if you are LGBTQI+ and a person of color, [or] have a disability, you are beautiful. If you don’t feel the love in your immediate surroundings, it’s out there for you. I believe that by being a beacon of love, you can eventually draw that love to you. Don’t give up hope.

If folks are making fun of you, making jokes about you, those jokes are about them, not you. When I was a kid, the jokes other kids and adults made about gay folks reinforced what I was hearing in church, on the television and the culture at large that gay was wrong. Since I was assigned male at birth and was attracted to other boys and called evert anti-gay slurt you can imagine, I thought I was going to hell, that my grandmother up in heaven was disappointed in me. My bullies conflated gay with my gender expression. I now know they are different tings. All of these things made me want to take my life, and I tried. I believe I survived to testify so that you can know you are beautiful and worthy.

A 2018 study showed that half of all trans men attempt suicide at some point. Trans and non-binary teens are among those most at risk for attempting suicide among LGBTQ youth.

Some recent events in the media have reminded me that we must always draw our attention and resources to the most vulnerable among us. So today I have a message for some special young people out there. #TransIsBeautiful #LoveWins

It’s the 61st anniversary of the first gay rights wins at the U.S. Supreme Court